The saga continues … here’s another helping of WYSIWYG + WISIWYR (from a prior post, “What You See Is What You Get” plus “What I Saw Is What You’re Reading”).

This time around, it may be helpful to admit that these observation thingies aren’t being published for reasons much more than their entertainment value.  I don’t want to come off as being “preachy” or exhibiting a “Better Than Thou” glance down my nose.

I see humor in most cases, albeit a mixture of funny, satirical, weird, sometimes sick, dark, and/or barely perceptible humor.  I’ve absolutely no intent to disrespect, dissatisfy, demean, or otherwise throw other “dis’s and dat’s” maliciously in your direction, dear readers.  On “this side of the eyeballs,” it simply is what it is.

“Words to live by,” according to those “in the know.”  Perhaps a romantic interlude to others.   Still, to others, just a collection of pseudorandom letters that, collectively, might appear to have meaning.

This week’s article, on the observations of the things that surround us, is more “dimensionally focused” – noting things like sizes, intensities, and complexities instead of names, places, and things.

For those of you whom have yet to figure out our initial enigma, here’s the explanation in a nice and easy quip, “Keep It Simple, Stupid!”

Many substitutes for that last word exist, from the kinder and gentler “Silly” (which in and of itself makes the four word maxim sound silly), to the “Un-P.C.” “$#!+#3@d” (language that would make a grown college student cry and seek a “safe place”).

No, this isn’t about shaving.  Nor is it a fancy title for the marketing gimmick thought to have been discovered and developed by King Camp Gillette. 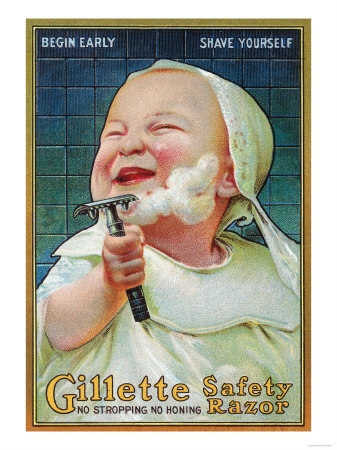 blades, you should be familiar with the gimmick – sell the public an inexpensive yet ingenious device that holds a razor blade at the proper angle for shaving while calling it a “safety razor.”  Then, over time, sell expensive disposable razor blades to the lucky shavers, with design features that prevented a competitor’s blade from working properly.

Thus, you create a repetitive market for your product. 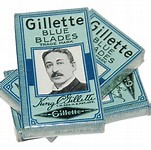 When the public starts to “catch on,” and razor blade sales start to falter, introduce a new gimmick on the old blade – like the new and improved “Blue Blades.”  (I remember “Gillette Blue Blades” extremely well.  I was issued one inexpensive Gillette Safety Razor and two packs of Gillette Blue Blades in Navy boot camp; along with my ditty bag.)

But, then, I digress.

Getting back to the “razor” (in this case, the definition of “razor” is “a principle”) attributed to its namesake, William of Ockham (a 14th Century village located in the county of Surrey, England)….   William of Ockham was a Franciscan Friar and scholastic philosoper and theologian.

His principle, or “razor” (sometimes referred to as the “law of parsimony”), targeted problem solving.  In high-brow science-speak, it relates that:

Entities should not be multiplied unnecessarily; or

Among competing hypotheses, the one with the fewest assumptions should be selected.

In everyday, you-and-me-speak, that can be whittled down to something like:  The simplest answer is usually correct.

In the words of its time (Latin), for those purists who are hanging on every word I pen, choose one or all:

It’s all the same – simplicity rules, and complexity sucks.  The principle holds true everywhere, even here in Paradise though (as my observations bemoan) it’s seldom practiced here.  The above 500 words are a fine example – “not practiced here!”

In my observations, there’s an air of importance and authority in complexity, within these islands.   The labor of seeking a simple answer to a “Yes/No” question makes my point.

Now, I’ll be the first to admit it:  I’m a simple man.  I was raised in simple surroundings, and taught to be direct in providing a simple, easily understood response to any “Qs” finding their way to me.  Why make life any more complicated than it already is?

Imagine, if you would dear readers, the difficulties in my adjusting to this new environment and to the responses of those inhabiting it.  This adjustment, while a labor of love, is a labor as hard as a day in the salt mine.  It’s hard.

For example, let’s try, “Is it raining?”  Normally, I’m expecting to hear either “Wen (O-o) [Yes]” or “Awan (Hindi) [No].”  Simple, no?  What I often receive, however, is a combination of amateur weather reports mixed in with all of the known consequences that rain or the lack of rain will

bring.  The monologue is sure to include a healthy helping of personal opinion, and an occasional “return question” wanting to know why I am asking.

The “Adjustment Meter” usually “pegs out” at this point.

In the world of local commerce, the need for adjustment is yall too obvious.  “Excuse me, but do you sell <fill in the blank with your most favorite, difficult to obtain item>?”

In commerce, it’s often a “team effort” with the first

responder (after a seemingly obligatory head scratch), will defer to a second.  The second to a third (after the ritual-like rake of the pate), and so on until the “keeper of the knowledge” is finally presented.  Then, all sit or stand in awe as the multi-paragraph pronouncement is authoritatively uttered.

Post-performance, the simple questioner nods in agreement, pays for this new-found knowledge with words of gratitude, and simply walks away wondering, “Do they sell <blank> or not?”

You’re correct.  For those of us who are engaged in the daily routine of adjustment, it’s not bad at all.  On occasion, it’s even a bit comical.

Still, for “John or Jane, fresh off the plane,” it’s a clash of cultures at its very worst.  If this introduction to adjustment occurs at the airport, following a tiring and trying flight (or set of flights) around the globe, the clash could easily go nuclear.

The term, “Ugly American” (or whatever the nationality may be) might very well be aptly displayed in action then, cementing the “U.A.” character of all foreigners deep in the hearts and memories of all who observe it.

The main observation here is that “It is what it is.”  Adjust and accept may be your only allies, but you’ll not find better allies anywhere.

“Keep it simple,” he said; in the most labyrinthine post EVER!

Hahahaha! I was thinking the exact same thing Doug!

Hi Willie – Weaving all the intricacies into each labyrinth isn’t the easiest task on the planet! 😆

That’s half the fun of Pauls’ articles!

Quote: The above 500 words are a fine example – “not practiced here!” Unquote. What better way of making a point that with a good example? 😆

I went into a stationary store looking for a hole punch and spotted one in the glass show case counter just as my wife asked the question.

Wife: ‘What is that,’ pointing.

She didn’t bat an eye…

Hahaha. Classic! Have heard similar stories here.
The comment below about the rum and coke is a beauty as well.
The article above confuses me somewhat though?
All good though

I know, I know, “splitting hairs,” etc. Yet, over here, misunderstandings in communications are an everyday hazard.

I’ve sort of discovered that obtaining an answer, that fills my prerequisites for being a good answer, requires the question to be “properly phrased.” Now, all I need to discover is what constitutes “properly”? 😆

Took the wife to a new watering hole for a night out. Sat down in the mostly empty room and after only 10 minutes or so, one of the five waitresses managed to pry herself away from her gossip and cellphone to wander over to take our order. “I’d like a rum and coke.” “Sorry sir, we don’t have any rum.” I looked around the bar at the various Tanduay advertisements and asked: “You don’t have any rum?” “No sir, sorry sir.” Befuddled, I reached for a menu and grumbled to myself while the wife ordered a pack of dried… Read more »

Hi Kevin – Old adage: “Be careful what you wish for ….” Outside of not receiving good “customer service” (a multi-chaptered topic for other articles), you did receive what you asked for. Again, the technicality monster arises to save the waitress and hold her blameless: — I am sure that the waitress was correct – they did not have any rum. — Tanduay is NOT rum – it’s RHUM. Rhum is made from sugar cane juices while rum is made from molasses. (I know, I know, “splitting hairs,” etc., yet a valid observation, nonetheless.) — A shot and a Coke… Read more »

Hi Paul,
My ex went through a phase of talking in riddles, which became annoying after a while.
That is one of the reasons she is an ex, lol.

Talking razor blades, I always preferred Wilkinson sword edge over Gillette.
I still use their double edge blades in a safety razor today.
I find they still give me a superior shave over and above any other shaving tools I’ve ever tried.

Hi Chasrand – Were it only riddles, there’d be some entertainment value in such answers (yet, still annoying). 😉 My “goat is well had” when the answer spans the respondent’s library of knowledge coupled with anecdotes from the “they saids” (who, themselves, are a bottomless well of moot information). 😆 I can agree with the Wilkinson Sword blades – would use them whenever I could obtain them. Nothing like “Sheffield Steel” to hold a keen edge. I still use a 20+ year old cigar cutter having a blade crafted from “Sheffield Steel” and it cuts today just as perfectly as… Read more »