Yes, I am very aware that the Philippines is not Paradise, however I use the title tongue in cheek for retirement there. So how did it get postponed?

I have been downsizing, selling, and focusing my lifestyle and possessions with an eye toward moving there sometime early to mid-year of 2015. Cleaning out STUFF from all of the farm buildings, cleaning and selling antiques and collectables that was simply new or used stuff when it was purchased. Do you know how much stuff you accumulate on a farm?

My goal was to have everything on the house and outbuildings fixed, painted, and sold by Jan 1, 2015 and living in an apartment. I was well on the way to meeting that goal when the Paradise train derailed. 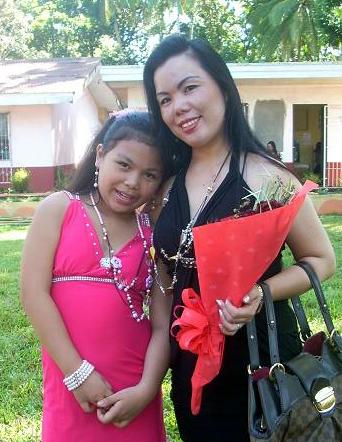 Princess and her Mama at end of school celebration.

Mid-February, one of my former consulting clients, an international food corporation, called me while I was in a meeting and left a message that it was urgent for me to call. I had finished my contract with them on good grounds and knew that it was not bad news. But, the best laid plans oft go awry.

By the end of the day, they hired me again to oversee a department that was similar to the one that I had turned around for them 5 years ago. The good side is that it will allow a better retirement for me since I am too young for Social Security but have heart and joint problems from an injury while working for the government that make waiting for Social Security to start impossible. The bad side is that it will likely take several years to complete the job and integrate the revised department into the needs of the corporation. Paradise just got postponed.

Why was I so focused on moving to the Philippines? The cold makes my back and joint problems worse and here in Cornfield County Indiana winter is nothing but cold so warm weather year around was a must. Also, I have a daughter there in the Philippines and the obstacles that prevented me from moving there or bringing her and her mother here is now no longer a problem. When she says “Papa can we all be together,” I want it as much as she does. Now that chapter in my life is past and I wanted to be with my daughter instead of just supporting her and her mother.

Now comes the immediate problem to think through. They have a house and about 8 acres of coconut farm owned in her mother’s name that I purchased for them. I have been there many times for 2-3 weeks at a time. Since I was raised until I was 18 in a lifestyle very similar to the Amish, I am comfortable in the rural setting with basic infrastructure. While I am fully aware that visits once or twice a year for 2-3 weeks is not like living there, I also get along with the neighbors and in-laws.

My dilemma is do we keep the house and farm while we are here in the US since I plan on bringing them here since I cannot move there, or what do I do with it until I am ready to retire? I bought it to give them a feeling of security while we were apart. 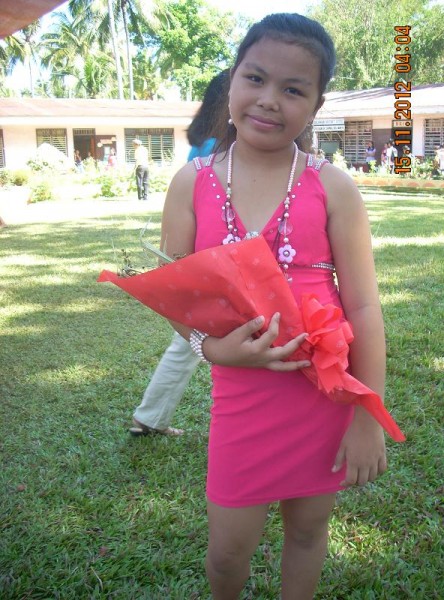 Princess with flowers from Papa for such high marks.

From the information of my friends there and the combined wisdom of the LIP writers and commenters, my instinct is to sell it and when we can move there rent where we wish to live. I do get the feeling when I mention that possibility that having land there is a security blanket to fall back on and there are family members that would be happy to live on it for us. It is paid for and realistically it would not cause a hardship if something went wrong in that situation. I am open for thoughts and suggestions on that matter.

I have started the process of visas etc. and since they will be here as long as it appears, I believe that citizenship is a proper thing to do. Having worked for one of the government alphabet agencies years ago, I can only assume it will take many years to get processed. I have followed the ups and downs of Scott’s journey with interest but assume that since they are not in this country it will take even longer.

I talk with them morning and evening via Skype or YM and enjoy helping with lessons and listening about the happenings of the day. If you look at the picture, you can see why when Princess as I call her, says, “Papa can we talk,” I have a hard time saying no especially when all she is asking for is us to be together all the time.

Since I hate to have all my eggs, dollars, or pesos in one basket, in addition to my consulting work, I am working and researching to see about starting an online business. That way the train to Paradise might get on track again. I have an amount in mind that once I can see that income a month regularly from the online business, I will be ready to retire after all.

I suspect that this journey will have as many twists and turns as Scott Fortune’s citizenship for his wife or Paul Thompson’s new old Honda. I just hope I have the patience and ability to see the humor in it also.

Leroy, Absence from family is very hard on any relationship especially extended periods of separation. Just ask any military man who has had long deployments! whether you bring them to the USA or go there to be with them,getting all of your together is a priority you should not ignore. The Land in the Philippines is not going to go away but I would get it into your wife’s name before she comes to the USA in case something happens to her mother before you return to the RP. beyond that I would get the family united in one location… Read more »

yes not a paradise, but I did not expect anything like that before moving here. Such place is not exist anywhere in the world. I realized early… than more beautiful a place is then harder to life there. An experience I made in French Polynesia like Bora Bora and Moorea, a place I -almost- settled down. I am thankful God did beware me to make that mistake. Its a place for millionaires or for the stupid and as I am not the millionaire I have to count myself to the stupid if I really had pushed thru. To PH I… Read more »

Sounds like the filipino farm is an established venture. Where is it located? My wife has an ownership in several farms, plus a house at another rural locale. The further away the farm is from family members, the more iffy the venture. If the 8 acre coconut farm provides a comfortable climate for wife’s family, I say let them work it and keep the profits from it,. If it is an area you are comfortable living in, it should be there for you when you are ready to retire. The key is to have a family member that can be… Read more »

In the previous paragraph, you were talking about your daughter, ie., “I wanted to be with my daughter instead of just supporting her and her mother.” In the next, you said, “They have a house and about 8 acres of coconut farm owned in her mother’s name that I purchased for them.” Although it might be a bit confusing, in my mind I take your statements above to mean that the house and farm is in your WIFE’s name when you said, “…owned in her mother’s name…”, not your wife’s mother’s name. If that is the case, it’s not something… Read more »

You’re not the only one who got confused John 🙂

I see a little clarification might be in order. I am not currently married to my daughter’s mother I am sorry to say. I had been married and my wife had left me after a period of time that her behavior became erratic. About a year and a half after she left me, she sent divorce papers and it was about that time I met my daughter’s mother, Inday. During the course of the divorce proceedings, my wife’s behavior was such the judge ordered some counseling. We found out that she had a terminal, non-treatable problem that was causing her… Read more »

Hi Leroy- Thanks for the clarification. It was how I thought you meant when you said, “… owned in her mother’s name”, meaning, owned in Princess’ mother’s name, NOT Inday’s mother’s name. The confusion arose from the use of the pronoun, “her”, instead of the proper nouns, “Princess” and “Inday”. It’s all the more reason why you should keep the house and farm. The title is in Inday’s name. Moreover, maintenance of a coconut farm is not as labor-intensive as, say, a mango farm that needs spraying on a scheduled basis. When you finish your contract in a few years… Read more »

Dito on what Hey Joe said. If I had land in the PH I wouldn’t sell it. But if you daughter is inherit any of the land her mother must own it.

Glad to hear things are postponed, and not derailed. It does sound like more of a positive delay than not though.

Do I understand correctly that you have a farm in Indiana, as well as the one in the RP?

Yes, it is a small farm. Essentially the farm home and outbuildings from a large farm that was devided in an estate with a small amount of acreage attached. I previously farmed about 25 acres in addition to the homeplace but I sold that off in downsizing.

I agree! keep the farm, something positive to come back to besides your two girls. Land is getting more and more expensive in the Philippines, I know! been looking for some myself in the past 5 years.
Good luck to you!

Hi LeRoy, i’m just wondering where is this “paradise”, i mean province! the school in the background where your daughter princess is standing on that above picture, positively reminds me of the elementary schools in aklan province. i see those schools from riding whether a tricycle or a jeep, from our own barangay, going to new washington or to kalibo, you’ll see one elementray school from barangay to barangay from the road. elementary schools always intrigued me ever since. i guess it intrigues me because at the age of 7, grade 1 (my first ever, school!), is when one starts… Read more »