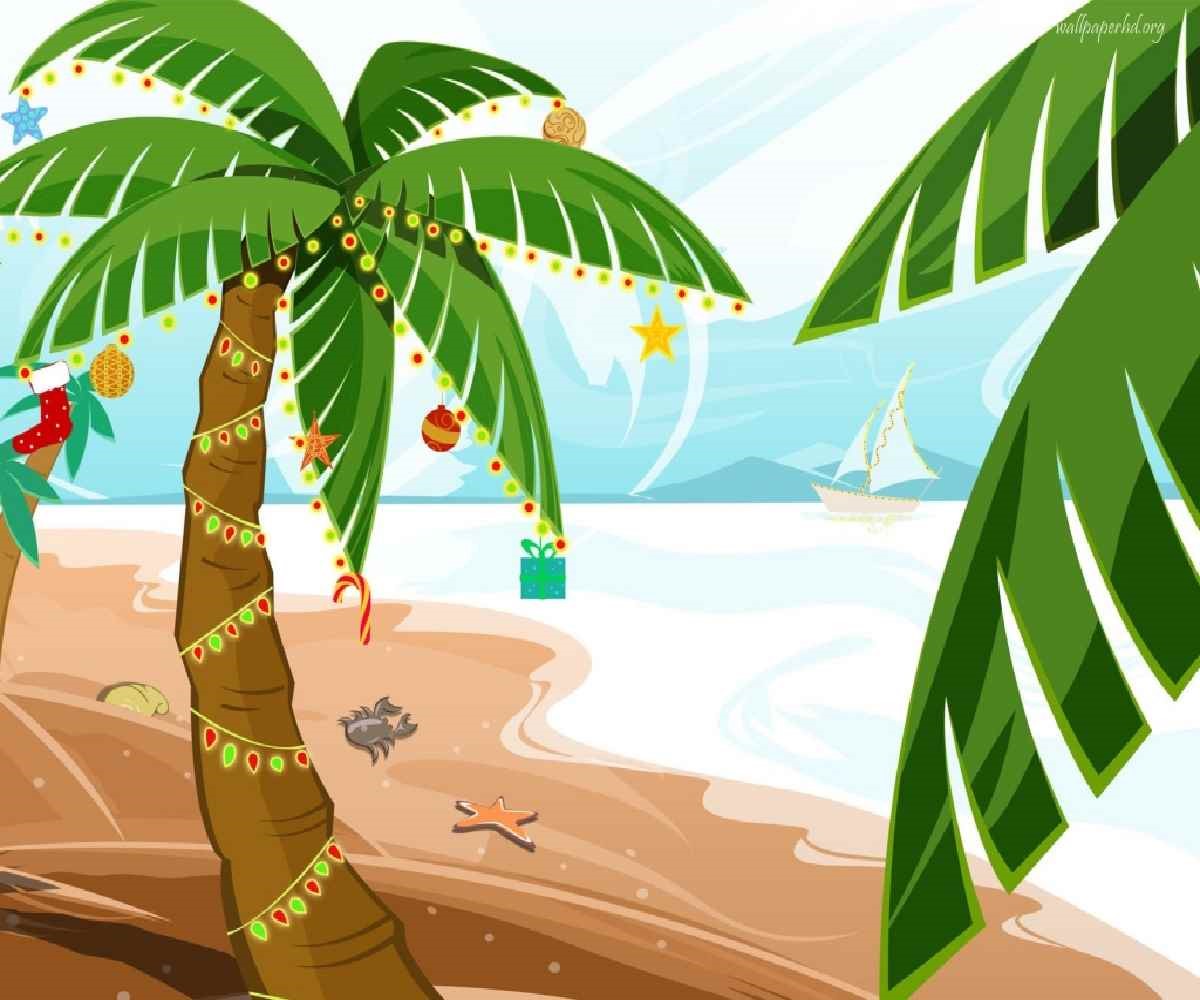 Do you ever get the feeling when you wake up in the morning that today is supposed to be a special day but you just can’t think why? It happened to me a couple of days ago, on September 1st to be exact. What could it be? Surely not a family birthday or anniversary – I would never ever forget any of those. (Or at least my smartphone calendar won’t let me forget).

No worries. Google to the rescue. Let’s see. So, Gloria Estefan and Barry Gibb were born that day, and it was also the day Louis XIV of France died (not all in the same year though).Nah -that can’t be it.

Maybe this. On September 1st 1985 the wreck of RMS Titanic was located, then, on the very same date in1998 the movie “Titanic” went on sale across North America!! (Major coincidence or brilliant marketing?)

Ah got it! On September 1st1939 Germany invaded Poland and triggered the outbreak of World War 2!

And then suddenly it dawns on me. It’s none of the above. Today, September 1st, is the first of the four ‘Ber months’, which in the Philippines can mean only one thing. The start of the annual four-month blitz of holly jolly Christmas songs, music and carols in every shopping mall in town.

Now, don’t get me wrong, I’m an absolute sucker for Christmas, always was and always will be. It can be a magical time, especially for kids, and the music does much to help create the atmosphere. There are so many seasonal favorites that bring back happy childhood memories. Even in the Philippines, we can fantasize having a White Christmas thanks to Bing Crosby. We can croon to Silent Night and sing along with Jingle Bells, or join in with Grandma Got Run Over By a Reindeer (yes, it really is #20 on a ‘100 Greatest Christmas Songs of all time’list). And there are so many familiar Tagalog Christmas songs to add to the magic. So yes, Christmas music is a wonderful part of the season……..but please, not starting in September! Christmas may very well be The Most Wonderful Time of the Year, but until December puts in an appearance, it’s not “Beginning To Look A Lot Like Christmas”! 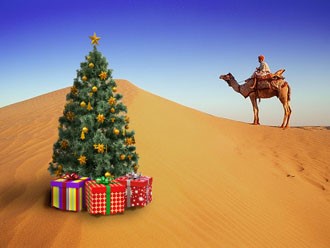 I first came across the concept ‘if the month ends in ber then it’s Christmas’ when I was working in a company clinic in Saudi Arabia. One day our ambulance driver borrowed my car. The next day when I drove off in the car myself, I was greeted by a rendition of Let It, Snow, Let It, Snow, Let It Snow at full volume. It was 45°C outside. No prizes for guessing the nationality of the driver!

A Partridge in a Pear Tree

Now, nothing at all to do with the Philippines, but still on the subject of festive tunes, here’s a fun fact: There is an actual organization, the PNC Financial Services Company, who for more than 30 years has calculated the prices of the twelve gifts from the classic carol The Twelve Days of Christmas. I kid you not!

The result is the “PNC Christmas Price Index (CPI)”. Last year, the total calculated cost of all 12 daily gifts in the song was $34,558 (including the pear tree). According to their website last year, and I quote: 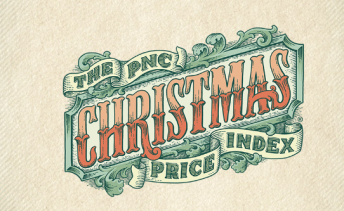 (The image of a flat partridge is going to stay with me now every time I hear the song.) 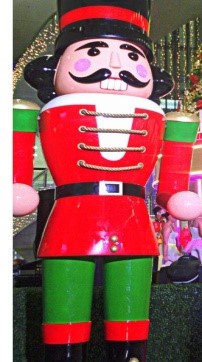 Back in the Philippines. We still need to put food on the table so it’s off to the mall, and let’s try to ignore Elvis spoiling the fun with his Blue Christmas. Fully prepared to go about our shopping and overlook the premature jollity, we arrive at the mall, only to be thwarted before we even get inside. There, sternly guarding the mall entrance are two 10 feet high Little Drummer Boys, giant toy soldiers with an expression guaranteed to inflict terror on even the most fearless child. Displaying their “XX days to Christmas” countdown cards, they regale us to load our credit cards to the max a week after we finished paying for last year’s gifts.

I try and slip past them unnoticed. 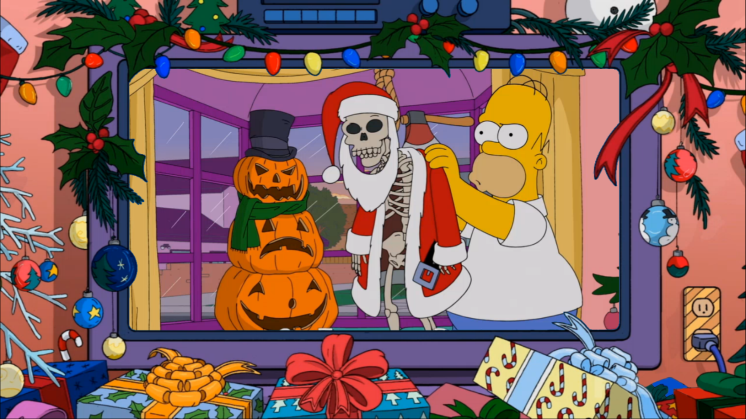 And of course, next month will be even more bizarre. Once October is upon us, Christmas window displays will be interwoven with Halloween offerings. Twinkling Christmas trees will be temporarily festooned with spider webs and dangling vampire bats. There is something surreal about Donner and Blitzen pulling their sleigh, pursued by screaming green-faced witches on broomsticks swooping from the sky. Spooky.

It Will Soon be Over….

In fairness, it’s not just in the Philippines that Christmas comes early. I hear there are already displays in some shops back home in the U.K. and no doubt elsewhere. The commercialization of Christmas just seems to impact earlier every year wherever you go. So believe me, I’m really not a modern-day, Philippines-bashing Scrooge, bemoaning all things Christmas. I love Christmas. It’s just that even the most evocative seasonal music can wear a bit thin after 12 weeks. So, Roy Wood and Wizzard – if you’re listening,I Don’t Wish It Could Be Christmas Everyday!!!

Not to worry I tell myself, it will be over soon enough, and all will be quiet again.

And then I remember…

On January 12th this year we made a routine trip to one of the main malls in Davao City, and……

The Herald Angels were still Harking!!

So as the old saying goes, if you can’t beat them, join them. Merry Christmas everyone! Maligayang Pasko!

See you on the beach. HoHoHo!!

Yep, I wish I could be there this Christmas season, I would love to to play Santa, I’m sorry I shaved my beard for my Filipina wife, but I have the silver hair

Cant imagine a full Santa beard in this heat!

So far no carolers here – watch this space!

Hi Peter. Yes, I bought some Christmas cards at an Autumn Fair on Saturday. Haven’t been down town so not sure about the shops yet. I can remember listening to a tinny sounding carol coming from a few doors away from my sons. Only there a few weeks in October but it drove me nuts lol.

Christmas Cards in Autumn!
OK, I give up. It’s only September. Anywhere I can buy Easter eggs yet? 😉

Peter,
I always enjoy watching Christmas shows, even though i watch most of the same ones every year. It would be nice if they showed as many here as they show in the States.

Love the shows and movies. Like I said, I’m a sucker for Christmas. Fortunately I have “The Wizard of Oz” on DVD!!!

I’m just curmudgeonly enough to enjoy that image of the flat partridge. Before I ever knew of the Filipino enthusiasm of the Ber months, I was weary of the incessant Christmas marketing as done in the US.

It’s a hopeless cause, but I would like to actually return to celebrating the 12 days of Christmas as was practiced in Old England. Starts on Christmas, and ends with a bang, January 6th on Epiphany.

Thanks for replying Pete.
Totally with you on the 12 days etc.! I always used to steadfastly refuse to put up my tree until a week before Christmas. I want the special atmosphere at the time and love the music as we do it. Only thing missing is the smell of the pine! Now we put it up mid-December because of pre-Christmas family visits etc, and also it’s a big tree and takes two days to put up in the heat lol!

Whatever happened to the Christmas “parol”? Nobody hangs them anymore? Aside from the midnight mass and the noche buena that follows, complete with keso de bola and hamon, manzanas and ubas, awaiting you at the dinner table when you come home from church after midnight, a Filipino Christmas in the Philippines without the “parol” hanging at the window of every house, rich or poor, is like eating “manggang hilaw” without the obligatory “bagoong alamang”.

I missed seeing those uniquely Filipino Christmas decoration at people’s homes when we come home in December.

We still see those stars up here, John. Plenty of roadside shops sell the commercially made ones. But my favorites remain the fragile home made ones. Last year, our caretaker decorated our ranchhouse with some his children had made in school. Never fear, the tradition lives on!

Glad to hear that, Pete, that the tradition lives on. I remember the fragile home made “parols”, as we school kids used to make them as a class project. We were graded on how pretty and how well they were put together. I remember using rice grains as glue to paste the flimsy, colorful paper on the frame made of bamboo sticks. Be safe out there in Nueva Vizcaya, Pete, and Jay in North Carolina! We’re battening our hatches down here in Virginia as well for hurricane Florence.

John,
They were out selling parol’s here in Lipa on Sept 1st. Like Pete say’s, they are everywhere here during the Christmas season.

Those parols are in my earliest memories of visiting the Philippines at Christmas season John. They are quintessentially Philippines!
And they are still around everywhere here. We actually bought 12 of them 6 years ago made from recycled drinking straws, and they were fabulous – simple and really decorative, We stored them carefully in a large box and kept them until we moved house last year.
As for the food – I love manzanas and ubas – and also, as the song goes… “may kendi at tsokolate, peras, castañas na marami!

Peter: Love your take on Philippines Christmas. It’s going full speed at our house. I won’t but a Pear tree. -Rob