All of my life I have peeled and eaten the same type of banana, Cavendish, the same way by grabbing the stem bending it back and pulling off the peel.

Everyone I saw peel a banana did the exact same thing to peel the banana.

I always assumed this to be the correct, logical, best and only way a reasonable person would peel a banana. Not long ago, I wrote an article about my discovery that other varieties of bananas available in tropical places in the world like the Philippines were superior to the Cavendish which is exported all over the world primarily because it is slower to rot. A reader commented that Filipinos peeled bananas from the end opposite to the stem and that this was better because the fruit does not get bruised and the stem makes a good handle to hold the banana while one eats it. This was news to me. I had never noticed anyone doing this before. I was skeptical. I tried the new banana peeling technique and found it vastly superior to what I have always believed to be the correct way to peel a banana. 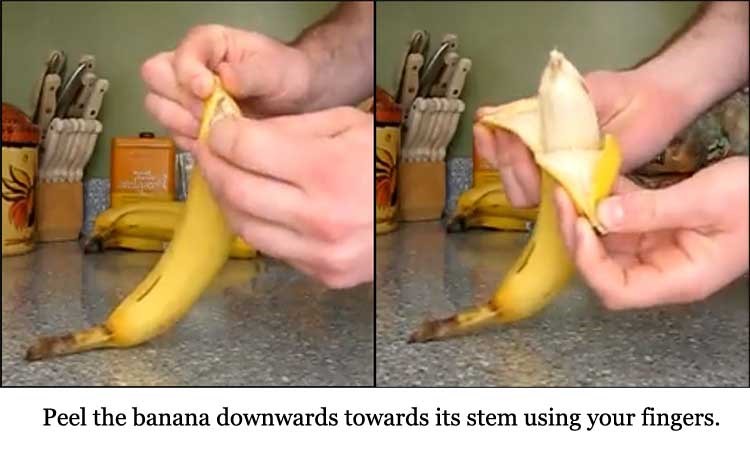 Bananas peeled from the butt end of the fruit don’t get smushed before eating. 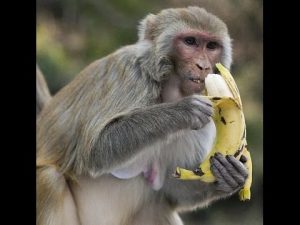 I have heard that monkeys peel bananas this way and there could not be a bigger expert on banana peeling than a monkey. If it works for the monkey, it works for me.

I have officially peeled my last banana from the stem. I have launched my campaign to end the banana abusing stem peeling. Have the courage to join me…or not. I honestly don’t care how you peel your banana.

If you are wondering why I wrote this article and submitted it for publication, the reason is to make the point that doing something differently than what you have done for years and have seen everyone do for years is not necessarily a bad thing.

Also when you go to another country and you see people doing something differently please do not assume they are a bunch of idiots. They may be doing things in a better way. I just like giving people something to think about. Have a nice day and eat more bananas they are nutritious and delicious especially the ones in the Philippines!

Jay, while we grow Cavandish for export, I personally fine the much smaller (I have no idea what’s the name) saging much yummier.

I agree, the smaller bananas are the best. In the part of the country where I live, the small ones are called senorita.

The small ones my wife likes and grew up eating from Bohol are Sabas. I have found them absolutely delicious, but have been told they are considered “cooking bananas” and not the best quality for eating raw. I think the thing with Sabas is they have to be eaten at just the right ripeness, then they are delicious. IDK.

Now that’s interesting Jay. Hereabouts “saba” refers to the slightly flatter and larger extremely starchy saging one boils and/or BBQs for banana-q, which is certainly not what I (or from what I see) anyone has until now mentioned in this thread. No one would even dream of eating such raw; well unless really starving and even then we can usually figure out how to make a fire to roast ‘saba’ in one of many ways.

I don’t know, but are the names and terminology so different and thus confusing in different islands in the Philippines?

Hi Ed, I heard the same from Bob Martin himself. I am not sure I know and you could be right that what they were calling Sabas on Bohol are called something different somewhere else, but my recollection is that these Sabas had to be harvested at just the right amount of ripeness. I think I remember someone picking them too soon and they had to be fried at one point. I do know for certainty that my wife sometimes buys frozen Sabas from Mindanao here in the USA and microwaves them to defrost and warm up and eats them.… Read more »

my Philippine born,American raised,wife has always peeled bananas “backwards” (in my opinion),and she hasn’t been able to train me to do it her way. Guess I’m not as smart as the monkey. 🙂

Maybe in a couple of years you will evolve. Itt seemed strange when I first peeled butt end, but the banana is better that way. I did not know that others peeled bananas this way for a long while after being married to my Filipina wife because she cannot stomach Cavendish bananas. Every once and awhile, she will peel one take a bite and put it back. We live in the USA. I am used to Cavendishes. I eat them and I like them, but they are poor tasting compared to Filipino bananas.

Jay, my Filipina wife of 38 years told me she has never heard of peeling a banana from the opposite end from the stem. I accused her of not really being a Filipina but she just shrugged it off. I will do my best to correct her erratic behavior and have her (and me) peel it from the “correct” end. Thanks for bringing this important matter to our attention!!

Hi Ouel, I see your dilemma. If you are not sure who to side with me, a guy you don’t know who writes an occasional article on LiP, or your wife of 38 years, then you got a bigger problem than which end of the banana to peel. You and your wife are probably right that I am over generalizing and that peeling a banana from the butt end is a regional thing not a “Filipino” thing. I do stand behind the fact that it works better. Congratulations on 38 years of marriage! That is great. Next week I have… Read more »

Your right Jay the bananas don’t smusch when peeled from the end.

Thanks for your support! I was kind of amazed when I first peeled one from the butt end. I guess that is a sign that I need to get a life that not smushing a banana gets me excited…oh well. Better is better. I try to learn something new every day which isn’t hard when you don’t know much to start with.

I always say my day is wasted if I don’t learn something, and today at about 0800 Philippine time, this day is no longer wasted. I don’t think I have ever peeled a banana from the blossom end, rather than the stem end, but I’m certainly going to try. Interesting that some cal this the Filipino way, becuase Filipinos around me, like my wife who’s been peeling bananas (in the Philippines and in the USA) for more than 50 years had never peeled one this way either … when people say “Filipinos do this” or “Filipinos do that” one has… Read more »

Hi Dave, Excellent point about overgeneralizing or stereotyping! I hate when people do it… and yet I do it myself. Yes there are about 100 million Filipinos spread out over thousands of islands. There are tremendous cultural differences between the 3 regions and even neighboring islands. The thing that bothers me about stereotyping and the Philippines is people visiting or just hearing about the “red light” districts and believing that is the way the whole country is. Oh well like I said I am guilty of stereotyping too. I look for to reading how your banana peeling experiment goes. I… Read more »