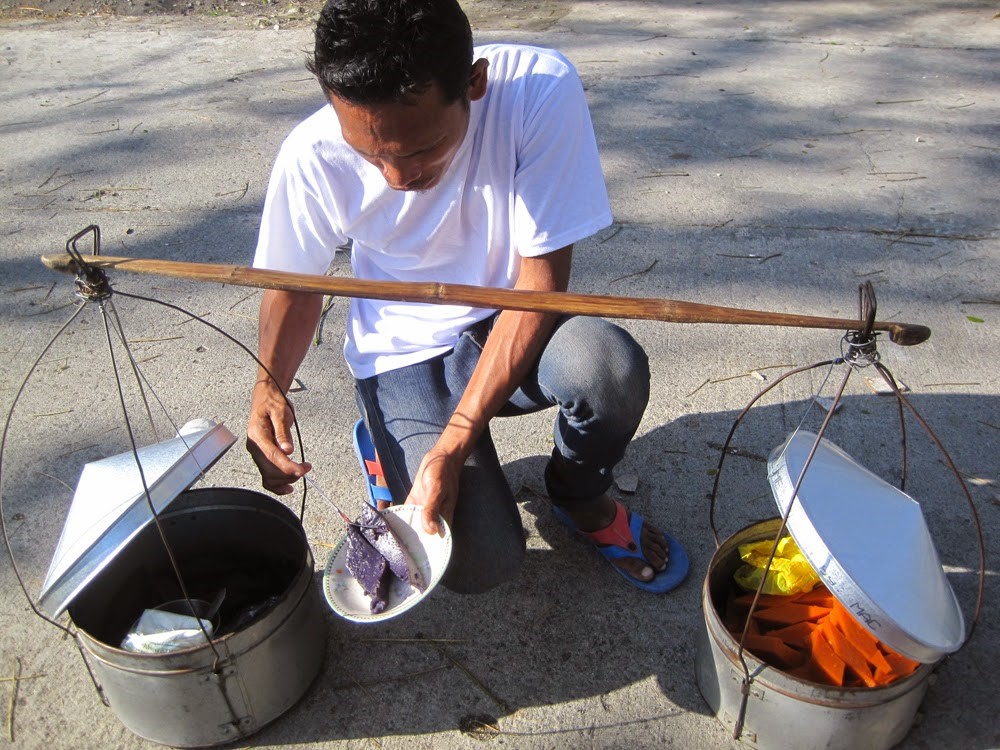 Vendor in the Philippines

Vendors in the Philippines

Sound familiar? It didn’t to me until fairly recently. Let me explain.

When I first retired to the Philippines I lived in West Insular Village, a pleasant and mostly clean gated community in Davao City. A bit pricey, but that’s what you expect from mid to high-end private housing compounds here. Nothing unusual in choosing a gated community – lots of expats do the same. But how come, after being a regular visitor to the Philippines for 26 years, had I developed the notion that I would be better off living behind a wall, especially considering my partner and his family are Dabawenyos?! Well, I suppose I’d convinced myself that it made sense for a foreigner settling here to live in a place protected by security guards, with visitors strictly controlled, and with CCTV cameras everywhere. So when our agent found a suitable (if rather expensive) house rental, it was a case of “yep, that will do nicely”. We moved in on the same day my shipment of personal effects from abroad cleared customs.

The house was nice enough, but it turned out to be really too big in the end. Fabulous for parties and the like but, oh the cleaning! I’m too stingy (or ‘kuripot’) to hire domestic help, so after a year we decided to downsize, and thus began a month of extensive house hunting all over Davao. I lost count of how many properties we looked at (there was always something not quite right- Ok, Ok, I’m picky!), but finally, we found a suitable townhouse. Where? – In West Insular Village, 5 streets away from our first house!!!

So there we stayed, safe and sound behind the wall. Now, don’t get me wrong, it was a nice and fairly modern house in a row of 12, and it was a quiet and peaceful area. (We were saving quite a bit of money on rent too). For the 4 years we were there, neighbors came and went, some pleasant, some not so. Social life was OK, with family ‘bonding’ on Sundays for BBQ, the odd foray into town for a meal and a beer, and occasional trips to Samal island for special occasions. But to be honest, we kind of got into a rut, until finally, we realized that it might be a good idea to downsize again. Now, the thought of packing everything up for the second time was horrendous, and after all, we were in quite a comfortable rut, but still….

And then it occurred to me. By downsizing once more we could maybe find somewhere cheaper (I was becoming even more kuripot at this stage). Decision made!!

Moving Out and Moving On – Real-World Culture

So in April last year, we escaped our protected cocoon, ventured into the real world, and found a nice bungalow across town in Bangkal.

Now I should say at this point, this isn’t per se about the pros and cons of living in gated versus open communities. Bob’s article Gated Communities is as relevant now as it was when he wrote it 10 years ago. It’s more about aspects of Philippine daily living and culture that can enrich our lives in simple ways, yet are all too easy to miss “behind the wall”.

One thing, in particular, I’m thinking about, is how street vendors are an example of daily living that we were insulated from in our secure village, (although I suppose to be fair, it was called West Insular!). OK, I know, vendors can be a nuisance sometimes in certain situations. I’m first to admit that  I do my fair share of mumbling and grumbling when my snooze on the beach is interrupted by offers of genuine Rolex watches and original Gucci sunglasses. But I guess those beaches would be less relaxing if I actually had to get my butt off the lounger and go somewhere to buy ice-cream or fried shrimp or a new bottle of suntan lotion (I put shampoo in my beach bag by mistake).  So it’s “thank goodness” for the ever-smiling vendor in his straw hat plying his trade, and “yes, a bag of peanuts will go down nicely with my San Mig thank you very much”! 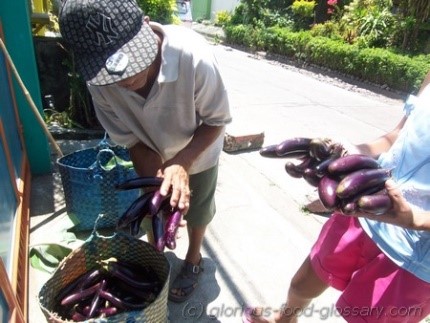 But back to the street vendors, especially the mobile ones who wander around the barangay every day, selling all manner of things (except dodgy Rolex and plastic Gucci), and providing services right at your door. Well, I think they’re great!!

When we first moved into our new place (and yes, the rent is cheaper!), I was fascinated by the calls of the street vendors. Much to my partner’s amusement, I tried to figure out what they were saying, and more often than not got it wrong. But by now their calls are familiar and kind of cheering, and to interact with them is a real but simple pleasure. Whether it’s buying moro-moro from the fish lady (she’s the one whose sales pitch is the title of this blog), or just saying good morning to the knife sharpener as he passes by on his rickety old bike, it all gives a sense of community. There are not so many, so it’s not intrusive, and in any case, these are all hardworking men and women who get up at the crack of dawn (or earlier) every day and walk the streets in all weathers to make a living. And unlike the big mall supermarkets, none of their goods are packed and wrapped in plastic. Respect. 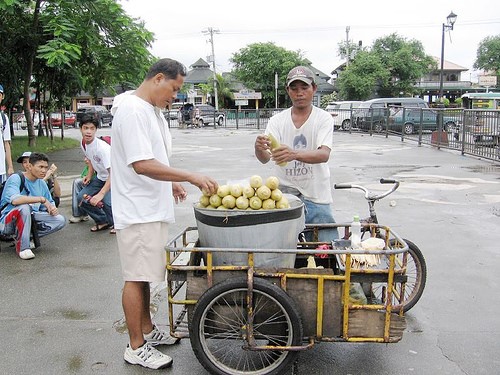 For anyone not so familiar with the local lingo (me included) I’ve listed below a few phrases I hear shouted every day by these fine people. They are part of the fabric of daily life, a reflection of how people survive and make a living. It’s a far cry from the sterile security of the gated village, and I LOVE IT! OK, our little bungalow is still behind a wall covered in broken bottles, and we have locked gates with spikes, (not giving up on security altogether!), but we’re no longer isolated from the sights and sounds and smells of a real community. Why oh why didn’t we make the move sooner?

Here are a few of the common sales pitches we hear almost every day. If you have vendors in your area that have their own unique calls, please let us know what they are.

at saka gulay (‘and also vegetables’)

baid (‘to sharpen’). The call of the knife/blade sharpener

Maize. The call of the sweet corn seller

bakal (junk), bote (bottle). The call of the scrap collector/recycler

I enjoyed reading your article and looking at the pictures!

Thanks for the feedback Jay.

Good article Peter. I too like to support the street vendors when I can, After all, they are at least getting out there trying to make a living, it can’t be easy.

Hi Mike, thanks for the comment. You’re right, they are just trying to make a living, and they;re always so cheerful in the process!!

Peter: I always like the guys hawking Tubig on the street here in Cebu. It’s been reduced to “Big,” and that’s close enough. Thanks for your article. -Rob

Thanks for the reply Rob. Near where I used to live we passed the same water vendor on the street in Damosa every day. We gave him the nickname Tomy Tubig!

Hi Peter- “Pssssssst” is the customary counter response to a street hawker”s call, if you want him to stop and come to you. It’s not considered disrespectful; in fact, in Manila of my youth, it is music to the ears of every streeet vendor because it meant business. Someone wants to buy. For me, home from school in the afternoon, I would wait at the gate with great anticipation for the “puto at kutsinta” vendor to pass by my house precisely at 3PM every day, in time for the household’s merienda of hot tea and biscocho. I preferred “puto at… Read more »

Hi John. Puto at kutsinta are new to me but I’ve tried biscocho. I’m also familiar with manggang hilaw, though I prefer my mangga ripe and sweet (i eat fruits every day). Bagoong is a non starter though – along with balut it’s one of the things I just can’t even try! Since I posted we have a new vendor in the area. I had absolutely no idea what he was selling as all I could figure out he was shouting was “ho”. I’m sure you know that he’s actually selling taho. Didn’t try it yet although I would like… Read more »