Blinded by Christmas Past

January is misleading; first I’m pleased that the money hemorrhaging Christmas Season is over. Then slowly I wake up and realize that (For me) January is the expensive month.

First paying to get my 2015 US taxes done, mine are simple and yes I could do it myself online, I’ve downloaded my 1099-R or what used to be my W-2, and this year to keep the thousands of new IRS (Obamacare) agents employed I found I fall under the newest government SNAFU, the 1095-B form which informs the government, that provides me with my TriCare Health Insurance that I have TriCare Health Insurance which renders me exempt from that wonderful gift from my government called AHC. But also that I reside outside of the US of A (Believe it or not!) and I am further exempted by that fact that is written on my Tax Form and in the return address section on the envelope that I live in the Philippines. But that provides more employment to my fellow Americans who otherwise would need that new $15.00 minimum wage, albeit these bright new agents no longer work at a fast food place.

Oh, the reason I pay to have it done locally is he’s an old friend that needs the employment. I guess the IRS didn’t need his services in Manila? Oh and he informed me that contrary to what my government said, I do not have to fill out the new 1095-B form, but when we were done I slipped it into the envelope anyway just for fun. 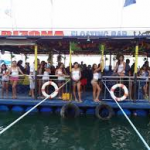 Next I wander down Gordon Avenue in Olongapo City and find the Bureau of Immigration satellite office to pay my yearly Head Tax of 320.00 Philippine Pesos. Not a lot of money, but it’s the anticipation as to what new silly rule will be in effect this year. The procedure is standard, slap the guy your I-Card wait, while the scribing is done, pay the money and run it is really a painless operation to renew. It’s the ever changing dress code requirements on every visit. So I wore proper shoes, long pants, and a shirt with a collar (And I had a tie with me in the car) Thought I was covered, it was the parking that was the problem, no lines denote parking, and this is the Philippines after all. A car was backing out, all cars (3 other) were parked at an angle, I took the empty space parking at the same angle as the other 3 cars, but I was wrong. You must enter straight into the lot. Sir (I asked the guard) do I hit the car on my left or the SUV or my right? I’d prefer the car as it is older and cheaper to repair. Or could you have all the cars pull in straight and I won’t hit anyone. Notice I did not argue with the guard albeit I did cause a major-major head scratch.. So I backed to the street, straightened the wheel and pulled in between the angular parked cars and pulled up until I almost hit the car on my right. But the guard was kind enough to assist me by tapping my fender.

Now the car is right, the rear end is blocking the sidewalk, but it’s straight. Oh and the guard was pleased with the polite Kano. Then Mayang is standing there telling me we were done as she took care of it. But I never got inside and I’m dressed to the nines. I didn’t even have to be there? Next year I’ll be sitting at the Legion having a beer.

Auto Insurance, She called to inform me from the office that it’s time! But; “Miss it’s not due until February!” But sir if you do it this month you will receive a wonderful discount. Well I’m all for a wonderful discount, but your price is the same as last year and the car is a year older and you subtract a percentage if it’s totaled and raise the deductable (It that made sense to you we couldn’t drink together). I believe I will change companies. Now with excited breath her new quote is one forth less than last year, but a new percentage and deductable (That’s normal). So without spending a week explaining it, it’s a much better deal. I took it!

Off to pay my property tax to Dinalupihan Bataan……. Every year it breaks me up. My property tax is 13,000 peso per year since time began. If you pay late there is no late fee. You cannot pay it early. Are you with me so far? But this is the part that sends me out the door to the parking lot laughing. If you pay it on the due dates I receive a 4,000 pesos discount, my bill is now 9,000 pesos. I’ll laugh but never ask them about it!

Now for the last bill due in January, the Retired Affairs Office which is set up in areas where high numbers of retired US militarily reside. They provide many useful services to us, one is a legal US postal address and mail service handled through the US Embassy who ships the mail to Olongapo City. The dues for this are $50.00 per year and in my mind the best fifty bucks I spend all year. On Friday the 15th I’ll motor to the Barrio mail my income tax papers to the all powerful ones and pay my dues. But not to waste the trip, we’ll meet up at the Arizona Resort in the barrio and have lunch with six other couples and visit the Arizona’s floating bar for cocktails and social interaction. The other floating bar is the Blue Rock at the other end of town, nothing wrong with two floating (Rhymes with gloating) bars is there? Lunch was great, but change 3 modification bravo put the kibosh on the floating bar part.

Typing this with slight residual effects from our outing Friday, But all the time remembering that not once in my life have I ever been intoxicated, but only over-served. As I ponder the monetary outlay from the beginning of the month, I’ll shut up and not lament that last month I was blinded by Christmas past. (I’m still allowed to say Christmas aren’t I ????)

What a great article made me laugh so hard.

Nilda;
Then my work here is done! I’m going back to bed. (lol)

Thanks Paul! You’re the best way to start the New Year…..with a chuckle and a smile. Keep in up. Yah..I know….no pressure 🙂

Tim;
As long as one remembers that stressed is nothing but dessert spelled backwards, all is fine with no pressure! (lol)

Looks like your good for another year and January is just getting underway. Dempsey’s Wednesday — I’ll drink to that.

Loren;
I still haven’t made it to Mongolian BBQ or the Arizona Floating Bar this year, But I will be at Dempsey’s for lunch!

Frank;
Oh woe is me! But wait it’s halfway into January and it’s over! Clear sailing until next December, then woops I do it again! But that is the reason they invented San Magoo Beer!

Surely cocktails surely come into the same bracket as girly beer? Do you drink them with your little finger up in the air?

And that’s what happens when writing before the second coffee…………you type surely twice!

AJ YK:
Don’t call me Shirley, no matter how much coffee is involved!!! (LOL)

At least 2 espressos 30 minutes apart are required on a Monday morning. That’s why I usually read your articles at lunchtime!!

AJ UK;
Two espressos? I’d be bouncing around the room and these articles would be three times longer. (LOL)

AJ UK;
I only say cocktails (No little umbrellas) because if I say “BOAT DRINKS” few (But Bob Martin) know what I mean.

Denzil;
Thank you for that!

Well, it is 13 degrees (f) back in my little country hometown of Princeton, Kentucky USA. Here in Tagaytay it is………..? Ahh, who cares this is Tagaytay and the weather is nice. Damn, that global warming.

Dennis;
I’ve heard that Global Warming is caused by ISIS, during the SOTU Address, and it cured Ebola!

I really do the same thing. I could use Turbo Tax but opt to pay someone in KY who does my taxes. How much does your tax guy charge?

Rusty;
1300 Pesos, and since he works out of the American Legion a beer or two. The beer is the real reason I go, don’t tell my wife.

Hi Paul, it’s a busy month for us paying taxes on land and property taxes getting permits From home owners, barangy, city hall, fire department the list goes on you’ve got a bargain on your property taxes it’s a lot more in Manila, and finally annual head tax went To taytay rizal because it’s quick in and out of the door 10 minutes, can’t do that this year Cause my I card runs out after 5 years have to go to Manila 4 hours in Manila everything Paid for including express fee told to pick my new I card up… Read more »

Derek;
Immigration has a website to check on your I-card and save a few trips. When you live outside of the City it saves gas. But card or no card I paid the head tax with an expired I-Card 4 years ago. I dream of my next trip.

Being an occassional resident of Dinalupihan I must search out some of these watering holes you so often recommend. I’ll be missing the trip later this year as the asawa has decided she wishes to go alone so that she can sit around the house for a couple of week chewing the fat with her sisters and family and not worry about keeping me occupied. This hurt me for a moment and conjured up thoughts of having to eat from the freezer and try and get all of the packets meals in the correct order, can’t go eating the dinner… Read more »