Change is Crashing Upon Us! (TWO)

A nice trip to Tarlac then two weeks later they did send me to a Manila clinic in Alabang City, a six-hour drive from Bataan. For some strange reason my daughter and her husband wanted to come along once more, and with my Granddaughter also joined us, I was pleased. It was miserable, 6 hours of driving to get only two chests X-rays and I was in and out of that clinic within 15 minutes. But there was a Pancake House a three-minute walk away, but we also have a Pancake House on Subic, breakfast is nice but that is a long way to go. Oh and Alabang City was a very nice area of the city, If I had to live in “Mega Manila, this is the part I’d want to live. 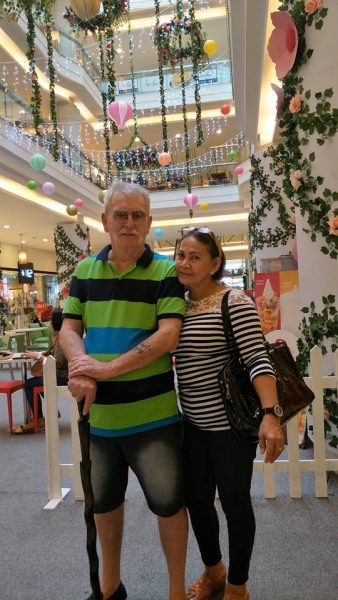 Hanging at the Mall in Manila

Well, we’re now ready for that long drive home. Then I remembered the fabulous LiP readers who told me I could get a Gyro’s Sandwich at the Cyma Restaurant at Eastwood mall in Mania. So we went there and it was good, the trip to Manila now had a reason and I gave my Granddaughter Colleen P.5, 000.00 for mall shopping in Manila. Albeit she was not fond of Greek food, but shopping took the edge off of that. If I can’t spoil her, what is the purpose of being a grandfather? We got home after dark, but the lunch and shopping took the extra time. Got Lemons…make lemonade!!!

Saturday morning the following day; another e-mail sending me back to Manila for a hearing test the next week… Paul go to Mandaluyong” (?) Market on General Kalentong Street somewhere in Mega Manila and following a series of pictures Houston sent to help me find the hidden clinic in the maze known as Manila. Angry to be heading back to the “City” Oh goodness yes, my x-rays last week took ten minutes, I could have Ziggy Na’d over and had this hearing test the same damn day, I had the time and guess what? I was already in Manila. Oh well!

Last trip I found the Cyma Greek Place and had a Gyro’s and a beer, because I’m a glass half full kinda guy, (Also if my glass does get half empty, I’m smart enough to fill it back up.) I was looking at the pictures Mayang took of me on the Greek restaurant’s balcony and when I zoomed in. There in the picture was the Tampa Florida Based Restaurant called “The Outback Steakhouse”

Another flash from my past, eateries I like! BTW, it is an American Chain not Australian. Sorry mates! But during my many trips to Australia I found some of the best Steak Houses in the world and priced so that you could go every night, and sometimes the crew of my ship did. I will tell you the steaks were huge and wonderful too? I always looked forward to our trips down under while working with and alongside the Australian Navy. 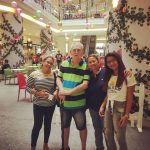 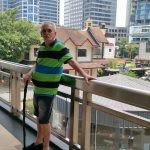 The Picture I cropped 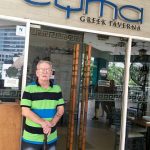 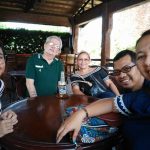 We always end up at Texas Joe’s

So I’ve found one more reason to get into a car, with no lower intestines and only half a colon and take a 12 hour round trip to Manila, A great steak! The joy of it all is without end!

The hearing test was administrated within a Nail Pallor and I got a manicure while waiting. The manicure took longer than the hearing test. On the road again!

I wrote a livid E-mail to my new found friends at the Veterans Evaluation Service in Houston Texas and enclosed a map of the Philippine Islands in case they try and send me to Cebu!

BTW due to time and distance the Outback Steak House lunch was tabled, so we drove home and ate at Texas Joe’s House of Ribs on Subic Freeport. Just as well and just as good.

There is a good Mexican restaurant called Agave in Eastwood. Wish I could find another one in Manila. A good steak would be nice too.

Alex:
A good steak would be the Outback Steak House at Eastwood, this is not a sizzlers type of place. I have four great places in Subic Area for Mexican food, which I also love.

Guess it’s time to get a MetroDeal coupon for the Outback Steak House. We need more Mexican restaurants here, they all seem to be in Subic 😉

Alex;
My friend Orlando, came to America from Mexico legally, did 23 years in the Navy and retired here in the Philippines (His restaurant had the best Mexican food) But here is the funny part, he overstayed 19 years here in the Philippines, and his family could not bring his body home without paying all the back money owed the RP. They cremated him and shipped the ashes air freight and the RP government is still looking for him. The place is still open owned by a former cook and employee and the food is still as good!

Paul ~ The former cook is key. Agave in Eastwood looks like it’s failing but the food is still good. I assume your friends place is in Subic. I think the Government probably stopped looking for him by now 😉

Alex;
When we go to the BI office on Gordon Ave. they still ask about him, but they took his picture down I’m sad to say. (LOL)

Alex;
I buy Hormel can chili Beans or without at Royal or Pure Gold and they are reasonable. I don’t know what a MOA is.

Paul ~ MOA is the Mall Of Asia.

Alex;
We countrified folks out in Podunk Philippines didn’t know that, so thank you! (LOL) (I’m joking)

There is an Agave in BGC. Better yet is Oracel (sp?) in the Fort Strip. Only place I have found that makes real corn tortillas made on site.

And I forgot about El Chupacabra. Makes great tacos, not hard shell type. In Makati across for H&J, close to handlebar.

Don,
I prefer hard shell Tacos over soft ones, It must be all those trips to TJ
for the weekend when my ships were in San Diego.

Don;
Do they have a real Chupacabra. on display?

Don;
Here in the Subic area we have no chain Mexican restaurants, I don’t know where they get the corn tortillas, but they are good. I’ll try the Agave it sounds good. And they do use the Agave Cactus to make tequila.

Hi, Paul. Is it not possible to get an x-ray done in Subic? Or is it some specialized piece of equipment?

Tom;
I was wondering the same thing during my 12 hour ride! It was a contract with the VA is the best I came up with! (LOL)

Sadly, you are likely correct (but I did like the emailing them a map of the Philippines).

Tom;
It is our duty to help others when we can, and I felt that a map would satisfy that need. But I honestly feel that they could hire that young unemployed Filipino lad there in Houston to explain what a archipelagoes is. (LOL)

Great article. Pancake House, etc is something I remember visiting in the States. However, where I live the local attraction is Dunkin Donuts.

Hgb;
The Pancake House Mentioned is a wholly owned Philippine company, and not connected with the similar name in the USA, But being a lad originally from Dorchester (Boston) MA Dunkin Donuts was from my hometown and I love their coffee. The great cake donuts and crullers are not available here in the Philippines only the donuts loaded with sugar.

Paul,
We go to Alabang at least monthly to visit S&R. They have a very good mall there right down from S&R called Alabang Town Center. There is a French Baker there and they usually have English muffins in stock. The Town Center Mall also has a Tony Roma’s, Chili’s and TGIF’s along with a Taco Bell. So if you have to make another trip there. Also Eastwood has a Hooter’s and also a TGIF’s.

PapaDuck;
I thought Hooters would not work in the Philippines because of bra sizes? We have a TGIF here in Subic but the price will keep most people out of there. Hooters; that is funny! But Alabang seemed like a nice place if you must be in Manila.

Good day to you there in DinBat, Mr. Paul T. I am glad you know about the legendary “Chupacabra”. You did really hang out in PR 🙂 By the way, I like Tony Roma’s place in Alabang.

Jose;
I first went to a Tony Roma’s in Guam, and found it to be very good, but the fact it was a two minute walk from the bar my ship hung around in might also have something to do with it. I have found that “Strong Drink” will cause sighting of the famous “Chupacabra”, whereas sobriety will cause the sightings to decrease. BUT!!! There has been no scientific study held on this matter! BTW with almost all having a camera attached to their phone, there should be many more photos of the Chupacabra, Big-Foot and UFO’s!