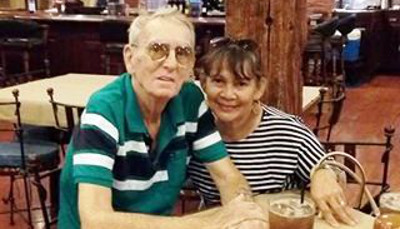 It was Saint Patrick’s Day in the morning.The guys from Cignal Satellite were on my roof tearing out the Dream System and installing the two new dishes. I came out and told Mayang that I didn’t feel so good. Then I was struck with diarrhea. This is where I cease being graphic after I tell you, that nothing but blood was coming out. Off to the hospital and my Doctor admitted me at once. A massive infection in my intestines and three operations to stop the bleeding, and 24 pints of whole blood so much FILIPINO blood that I woke up craving rice and thinking in Tagalog.

I lost the ability to talk because of all the anesthesia I had ingested during the three operations to keep the bleeding in check and keep me in the Philippines. Three weeks later I awoke from the fog and found that I was alive and a lot of my digestive tract was MIA. But Mayang was there smiling at me and quite happy to see me.

My memory was gone, I forgot how to use my computer; or even how get money from the NFCU or even write for LiP or Facebook, all gone. I thought the world was plotting against me. I could now really understand how Jeb Bush felt when he dropped out of the campaign. But slowly it all started coming back, one little thing would key in another.

In May they decided that if they sent me home I would get well faster, and they were right, the power of the familiar is indeed a wonderful thing. I struggled with my computer and found my way to my bank and moved some money here. But found that I was broke. I wondered where my money had gone or if even I had ever had it in the first place. A week later at 3am it came to me and I hobbled to the Puter and logged on to my bank, and this time scrolled down my list of accounts and found my IRA’s just sitting there waiting for me. Oh joy and happiness, but Mayang was upset because I went downstairs by myself (I used the handrails!)
A few days later I found LiP and an article that I hadn’t sent just waiting in the file. So after wracking my brain I remembered how to send it to Fearless Leader Bob. Files of jokes and tax information and useless stuff and all backed up on 2 one terabyte external memories. My thousands of albums of old rock and roll and country music just sitting there, I’m back babe, I’m back!

The humor gate had not fully opened as of yet, albeit I can see its funny, but I’m stumped as to how I can point it out.

So I’m missing my colon, but still have some inside bits left that will all be hooked up again as soon as I get stronger and gain back my weight (I’m at 126 and need to be back to 145 pounds) I weighed more than that but that was a beer belly and junk food. This was a brief history of why I was MIA for three months and the subject is now closed as far as I’m concerned but this was “How it Happened”. But of course some strange things happened that I will be writing about as some were just so damn funny. The picture above is of me after release at Texas Joes for a real meal and not hospital food. I am growing my mustache back, and have asked the doctor a few times why they removed it no answer. This will be my only picture without it…Treasure it!!!

Oh, and the crappiest Saint Patrick’s Day, this son of Ireland ever had.

I’m surprised you could keep a sense of humor about it after that experience! My goodness! Whatever caused that infection anyway? That’s pretty scary.

Liggy;
Cause unknown, but I have found that without a sense of humor the world is doomed and someplace I wouldn’t want to be. And yes it was scary!

So glad you are recovering. I’ve been in the Philippines for over two years, about two months after arriving I got sick though not as sick as you descibe but still sick. Was sick for almost an entire year and was not really able to leave home because I needed a nearby bathroom. I stopped drinking water and switched to Gatorade and started to feel better near right away. Did not matter the brand of water I bought, they all got me sick but that was not all. I have since stopped eating at local restaurants unless they are huge… Read more »

Mike;
Wow that sounds severe; I don’t think I could have been a Merchant seaman with problems like that. I drink bottled water but Gatorade is a favorite of my too.
I was fine the morning I ended up in the hospital, I was eating breakfast and three hours later on the road to the emergency room. We have no idea why it happened.

Hey Paul, It’s great to know you made it and is still living happy, You’re an inspiration. I to retired navy went to work for MSC for 28 years now living in Alaminos City with my wife Nilda from this area retired MSC laundry person. Take care.

Tony;
Wow, I do the time in Hospital, and have three operations and you give the credit to Bob? (lol)

Tony;
Wow, I do the time in Hospital, and have three operations and you give the credit to Bob? (lol)

Thank’s for, “How It Happened” article,
I was wondering, “What Happened?”

Wrote ya a comment Paul Thompson… I’m to lazy to copy and paste here plus I got a cold one in my hand…. so I am otherwise occupaddo

Beanahole Gardner No cut and paste involved. If you comment here it is automatically imported into the blog. Unfortunately there is no way that comments on the blog can be imported here. Either way works, though.

Future reference…. until I forget…. again.

Good to see you back Paul, try and get a few steaks down your neck. Hahahah.

Jon;
I was out yesterday and had chicken and mashed potatoes and gravy. Steaks are in my future not ready quite yet.Sooooooon……………..

Good to see you coming back strong Paul… Hope the mustache is too:)

Billy;
I’m growing my trademark mustache again, but since it is the first time it was not there I have no Idea how long they take to grow. But I do miss it.(lol)

Yep grow it back it make you look younger Haaha, see your drinking tea , give it time you will have a warm SM in your hand soon enough Mate Yeah buddy Hahahaha

Tom;
I don’t know if the stash makes me look younger, but without it I speak oddly. (LOL) A warm SMB???

So happy to see you back and writing! Sundays evenings just weren’t the same without you, Paul !!! Take care of yourself! INGAT

Kevin;
Sunday evening or here on Monday morning, it feels great to reconnect with the folks from Lip.

Glad you are slowly getting back to normal. You are so right, the mustache is Paul Thompson. Just continue to follow Mayang’s orders and you’re recovery will progress smoothly lol. Believe me I learned the hard way when i spent a couple of. days in the hospital a month ago to have my gallbladder and 2 gallstones removed

PapaDuck;
I have a Doctors appoint tomorrow, but Mayang has one everyday all day, who do you think I listen too? I hope you’re feeling better after your operation.

Man it is good to see ya back ! And hey your humor is intact. The FB POST are on fire . Ya give me a laugh everytime. And I figure I got roughly 300 days til I touch diwn in the land of hurry up and wait…. so ya got time to get back to fight in weight and we can have those cold lil brown buddies of sanity.

Hi Paul- Glad to know your well and back in the land of the living. Eating rice three times a day and speaking fluent Tagalog is not a bad trade off I’d say.
Best wishes.
Jim & Marilou.

Bubba;
Sitting at lunch with friends drinking ice tea, while they pound SMB’s doesn’t bother me but it drives me to get well quicker!(LOL)