I Really Should Know Better 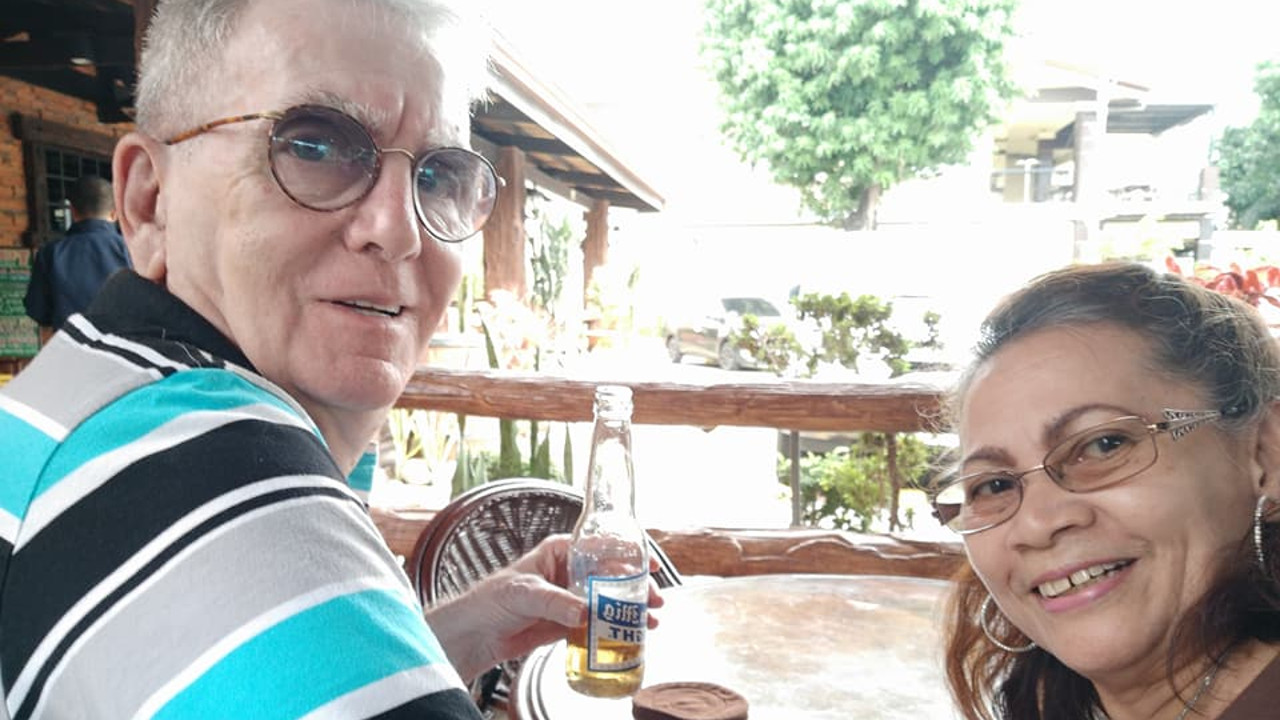 Changing the way you look can be a good thing or not so good. In the US Navy, I was on a commissioning crew for a new ship in Norfolk VA in the 1970’s. We didn’t have much to do but hang around the barracks and sneak out as early as we could.

Then one day a Master-at-Arms (Cop in Navy terms) came by saw my 3rd class Petty Officer emblem on my arm and assigned me to a work detail. As he headed out to find more people it dawned on me that he didn’t write down my name or even knew who I was for that matter. So I took off and showed up the next day cleanly shaven. But noticed he was searching for someone. A few months later I grew my “mustache” back and had been promoted to SH-2.

When I retired from the US Navy, I let my hair grow out quite long, as I owned two beach bars in Puerto Rico and had to fit the image. (My mustache also grew out expediently.)

Next, I started sailing as a merchant seaman still wearing long hair and a drooping mustache. There was no problem with this as we were all civilians.

On July 13, 1997, I was waiting for assignment to a new ship and hanging around the “Seaman POOL in San Diego, it was 0900 (9 AM) I walked to the Gedunk (Navy snack bar) to get a cup of coffee and passed a barbershop. Hmmm, I turned fifty that morning and thought I was too old to wear long hair anymore. So off it came. (Just the hair) 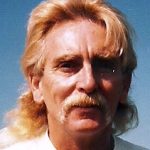 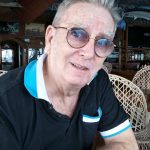 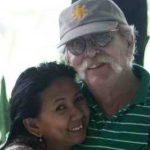 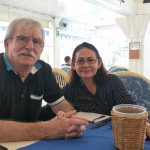 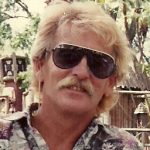 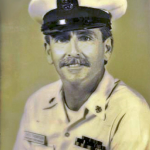 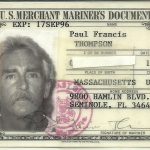 Three days later I noted that others were flying out to new ship assignments and not me. I walked into my detailers’ office and asked Gloria why I was being held in the “POOL”? She looked and asked: “Who are you?” Ah, that damn haircut is the problem, she and I were friends but she is a busy lady and had lost me in the crowd. I got a great ship assignment an hour later and flew out that afternoon.

Since that day until now I’ve worn my hair high and tight (Military standard) Most people have forgotten my long hair days. Except for my wife who happened to like it. 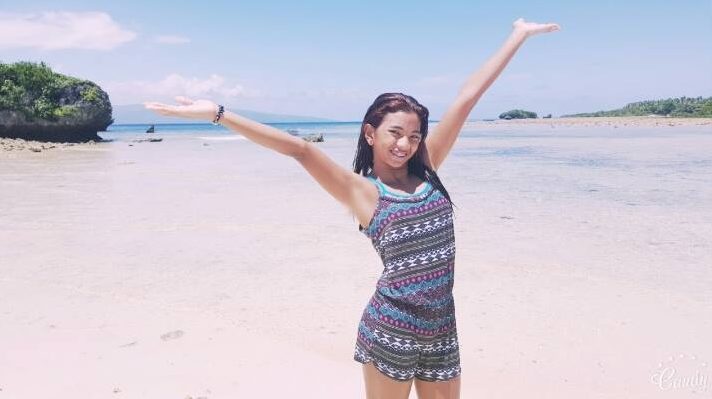 My granddaughter owns me

So if you think I learned my lesson, you’d be mistaken. In December 2017 I foolishly saved the mustache for reasons that even I don’t remember. My granddaughter who never liked my mustache when she was a wee tyke as it tickled her face looked at me and said; Lolo Daddy Paul, please grow it back, I don’t like the new look. That was enough for me, the rest of the world is welcome to their option, but only one counts with me and she is the one. 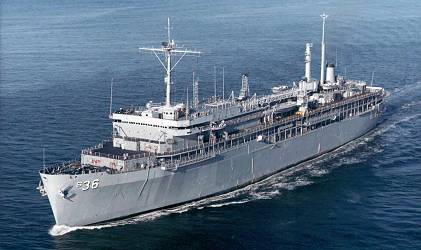 So since that ship in the 1970’s (USS LY. Spear AS-36) was the only other time since 1966 that I was cleanly shaven. BTW I tried a beard once and learned quite fast that that was just not me.

So the lesson should be: don’t alter your appearance unless you are hiding from a ship’s working party, or you can’t figure why you cut it off last December.

My purok and Barangay neighbors complained that a new Kano had moved into our area, but my wife explained it was the same old dude that has been here since 1993. It is all back to normal again.  If the rain would let up for the day I’d go get a manicure and a haircut at the mall.

We all change with time and with the times, Paul. Some people look better in old age, and some people appear old before their time. Some people looked good with long hair in the 70s, but try having long hair now. My question is: how the heck do you remember from memory the exact date of a particular event that happened 21 years ago?

John:
Because it was my 50th birthday, and I had said to myself that morning, that I was too old to wear long hair anymore.
It was very easy to remember something like that. I also never thought that I was that good looking, but I knew I could talk with the best of them. If you can make a woman laugh, you might get to keep talking to her…Plus I have an excellent long term memory, but now I have trouble with short term memory. (LOL)

Paul – I was 23 when I rotated back to CONUS from Germany to receive my discharge papers in Fort Hamilton, New York. About a month prior to my rotation back to the “world”, I started to let my hair grow long in anticipation of becoming a civilian again. After about two weeks without getting a haircut my hair started to stick out from under my field cap. Every one in the company, from the 1st sergeant to my squad leader knew I was “short” (short for short-timer), so they kind of let it pass (the long hair) until one… Read more »

John; In the Navy a short timer was forgiven hair transgressions as they eased out the to civieland. (Not a real word) we (Navy) used a short timer chain, and one link was removed daily until discharge. Also the Navy referred to Article 15 as “Captains Mast” but it is the same or called NJP. But we (Navy) also were blessed with Admiral Elmo (Bud) Zumwalt our Chief of Naval Operations who granted us long hair. (Not as long as the Dutch Navy) At a uniform inspection I was a Senior Chief and an Admiral asked me, if he held… Read more »

Wow, what a change, took me a minute. I grow a moustache while stations in the Philippines back in 1972 when they were letting up a bit and a full face beard once I got out. But never liked then in the heat so I shaved them off and been clean shaven since. And my wife has said no a couple of times when I talked about growing hair again. Her comment is I am hairy enough, no need to prove that I an an Ape. I might end up in a zoo..

Luke;
What was funny is my mustache was always a lighter color than my hair (Before it went gray) The first stach I grew was while on my first ship, which was stationed in Mayport Florida. So I started in the tropics. (LOL)

Good one Paul, as usual. I continue to change my look a bit although I don’t have as much hair as I used to. I went to my local 50p barber and this time had one of those bald lines cut into the side of my head along with my haircut. My wife hates it. “You’re not 20 years old.” it’s just me, “Stylin’ Rob

Rob;
When I went back to my military high and tight style i stayed with it. Then in 2009, I foolishly decided to let it grow again, my buddies asked if I got younger in my late 60’s? Plus how silly does a ponytail look with gray hair. ANY READER WITH A PONYTAIL AND GRAY HAIR, YOU LOOK GREAT!!! Anyway i reverted back to high and tight within a month. My granddaughter smiled.
It is wise to listen to the ladies as we age.(LOL)

MaryJane;
You post the most thought provoking comments on this site.

Paul,
You look good with your hair long. But have to agree with Colleen, having no mustache does you no justice. You should see my high school senior photo with my long hair and leisure suit lol.

Papaduck;
leisure suit? OMG…Wait I admit I had one and regretted it ever since. (LOL) Colleen is never wrong!

If you decide to grow one back, you could always get inspiration from yesterday’s contest in the U.K. Paul!! ?

Peter; In 1982 I was stationed with your Royal Navy on Diego Garcia, British Indian Ocean Territory. Young Tim (US Navy) had just returned from his sister’s wedding in Bugtussle Arkansas. He came to muster with 87 stray hairs on his face he called a beard. As his Senior Chief I said; “Welcome back Tim, now go shave.” He protested; “Senior Chief, the Navy says I can wear a beard.” I replied; Yes Tim, that is very true, but I know your family is religious, is the Navy senior to the Lord?” He stammered; “Of course not!’ Tim I said,… Read more »

I have had a mustache most of my life, full handle bar!, But when I fell in love with my Filipina wife, she ask me to shave it, not even a second thought, it was done, if Mama’s happy everyone is happy!

Gerald;
I met my wife in the early 1990’s I had the full stach and way to long hair. She was surprised when I cut my hair, but she did smile. In December my family wanted the mustache back.