In 2001 my wife wanted a fish pond; of course, I told her to get a fish pond but mentioned that aquariums are really nice. She hired the neighborhood guys to dig the hole and using waterproof cement that is mixed with Sahara magic powder and topping it off they used vinyl (Water Proof?) roof paint. Basically the same way we waterproofed our slab roof. But it leaked (Not the roof), so it was all redone again until it didn’t leak.

Then we went to the landscaper who built her grotto and hired them to build her waterfall, the waterfall aerates the tank and looks and sounds nice too. Add some ceramic jars and other stuff for the Koi to lay their eggs and let nature take its course.

When the small fry exited the jars Mayang noticed that the big fish ate the poor little fish, so I suggested she remove the fry or are they called fingerlings? Damn if I know, but for years we have not had to spend money to replenish the fish pond. Remember I mentioned getting the aquariums to her? (We have three now)

I also don’t know if they are Koi or carp, but then after a cold beer, I tend to not care what they’re called. I just sat and ran my RC Speed Boat, until we found the whirling propellers was killing a fish or two. My boats were dry-docked and I was scolded harshly. No boats allowed in the aquariums too. 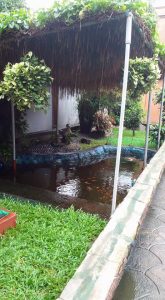 With the pond built and the waterfall installed, it was found that our black Labrador “Smudge” won’t stay out of the water, and put the fear of the lord into the fish. Again its nature isn’t it? Then Coco our brown lab took over and now our white lab Max is having his turn. The labs are staying I’ll replace the scared fish first.

Next up we find that Mayang’s water is turning green! Sunlight in the tropics causes algae my love; its just nature isn’t it?

But not if you spend money on pipe welders and a screen cover and one plant that won’t stop growing. Thank goodness we don’t raise cows. This plant has taken over the pond (It is some form of fast-growing vine like the Kudzu plant from Japan that traps sleeping cows in the United States. To date, no cows have been injured in my purok, but the damn plant now covered the fish pond my wall behind it and now three of my neighbor’s walls. But they seem to like it, I’ll assume because it’s free.

This went on for a few years until the weight of plant from hell caused the structure to sag. I can fix that! How? More money, of course, more pipes and welding guys solved the problem. A few more years go by…

Because of health issues, I now take a back seat to all things in Mayang’s house. Damn, I’m a smart man! The rainy season is upon us here on LUZON in May and now it has not stopped since the first of June. 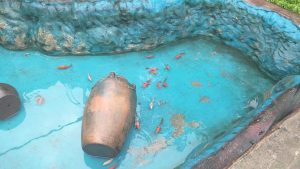 Surprisingly most of my year after the rainy season is a sunny day, I can make a beach party plan months into the future because we know that there is a 99.9% chance it will be a beautiful day.

Years ago the American Legion, VFW, FRA and the RAO in the area had a 4th of July party every year, and 90% of the time it rained. A wise man suggested (Not me) they move the celebration to February and call it the “Beach Bash” to date it has not been called due to rain.

Plus my Son-in-law has on his farm a 1/2 hector fish pond and will stock it now with Tilapia by the millions for future sales at the market, and the first rice planting on the other nine point five hectors. Including watering the fruit trees and livestock. I won’t see much of Chris for this month and part of next. There was a time when I enjoyed going there to help, but now my cane sinks in the mud.

So June 9th I heard a commotion from the backyard and noticed crews of family members are ripping down the plant that owns the world. All fish were removed and the pond was cleaned, and allowed to refill by the falling rain. Why she picked a hard rainy day to do this? I didn’t ask, and by the way, I never will.

The fish (KOI?) seem happy, the tank is sparkling clean and my wife is planning on a new cover for the pond, but I don’t think it will be a plant. Once more I’ll smile and nod, and keep my mouth shut that I still have that nice boat in dry dock.

takes a wise man to smile and nod

Dennis;
On face book a friend asked why I didn’t have GPS in my car? Mt reply was; “I already had one Asian voice telling me where to turn, why would I want an electronic one too?” Smile and nod!

Paul: Good story and great backyard project. My life in the Cebu condo doesn’t afford such things. But, I did do a similar project to yours in Oregon. When I put the fish in the pond as the final touch, I was so proud. The next morning I got up and found that raccoons had eaten all the fish. These were the same raccoons that stole my sunglasses I left on the deck. Somewhere there’s a cool raccoon lookin’ like Rico Suave.

ps, I read my wife your gps story. She smiled in recognition.
-Rob

Bob;
When I lived all those years in Puerto Rico I was Rico Suave!
Here birds have tried that, but labradors don’t like birds, so the fish thrive.I spent every summer of my life on Cape Cod, my father hated racoons as every spring we removed them from the crawl space of the summer house. (Don’t tell the other folks from Massachusetts but he used a Colt 911 he procured during WW-II (I wanted a Thompson Submachine gun, they used the same ammo!) (LOL)

It is a wise man that knows when not to talk. Great article, I enjoyed giggling..

Luke;
Something I learned in the Navy, if you wanted promotions and more money! It works well in marriages too.

Hi Paul I had a friend who rented a car in Paris (GPS in rented cars was relatively new at this time) he knew the route he wanted to go but the “French Lady” in the GPS kept trying to send him in a different direction, eventually the voice stopped and he reckoned it was because she got fed up of talking to him as he was just ignoring her all the time. Is there a lesson there in there somewhere? I think there may well be. Anyway I know it has nothing to do with the fishpond but your… Read more »

Jack; As if LiP has strict rules on topics, I know I don’t (lol) Ah Paris, the city where they don’t even like each other. True story? Sitting at a sidewalk cafe,and having a bowl of French Onion Soup, it was raining and it took me three hours to finish the soup. In the 1970 I spent a week in Paris, the Navy was transfering me back to the USA and I saw no need to rush! (London was 8 days until the Embassy told me it was time to board the next plane..Tax payers, I thank you for that… Read more »

Hello Paul, Rainy season has finally started here too. We get the pattern of hot mornings and an afternoon thundershower around 3:00PM to cool things off. I’m not sure if it’s normal for us to be about a month behind you, or not. Local folks I ask seem to be trying to guess what I want to hear so they can tell me that and move on. I’ve gotten several different answers on that, sometimes from the same folks. I’ll likely just have to wait a few years and watch the pattern for myself. I haven’t yet herd of a… Read more »

Hi Pete; We just had six full days of solid rain as we were in a standing low pressure system, then a few days of sun and back to the rain. Last night at 0100 we had our first thunder storm, three hours off thunder and lightning every minute or so, until 0500, when I lit off the generator. My neighbor mentioned he heard the generator fire up, so I asked if he heard the thunder also, selective listening? Power was back at 0930 and all is well. My VA lady was by the today to tell me my VA… Read more »

Paul,
We haven’t communicated in a while, but at one time we communicated fairly regularly.
I don’t have your Personal communication links anymore.
My house burned down in January so I don’t need to worry about how to liquidate that before moving down to the Philippines.
My wife Dasey is stuck in the United Arab Emirates in Dubai or one of those places over there under contract.
Won’t be getting it back together again after a long period of separation in February or March of next year.
This will be permanent.