My Alaska Adventure: The Beginning 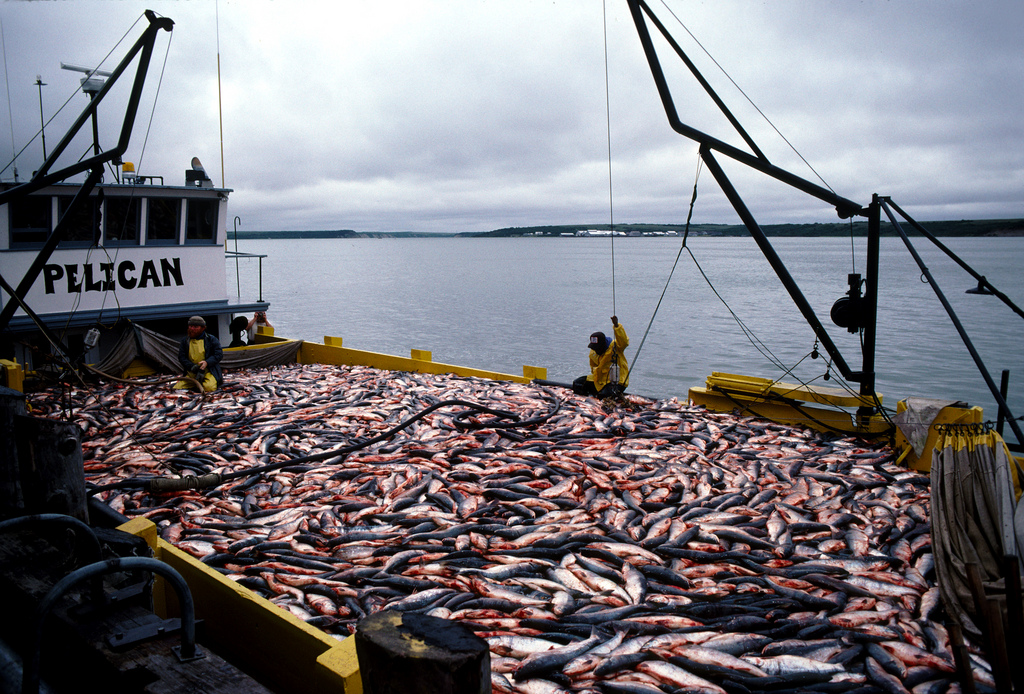 The Pelican offloading at Red Salmon

Hello everybody, it’s been a long time since I last posted here. Been busy with a lot of stuff and also I’ve been in the States for over 6 months.

I went to the States May of this year. A planned trip just right before Bob’s heart surgery. I think Bob pretty much lay out our plan why I wanted to work there. I really got the idea of working in Alaska after hearing from one of our dear friends. I told Bob that I want to try to work there. At first, Bob was hesitant because we’ve never been away with each other for a long period of time. After I told him my plans and stuff and he agreed and supported me. It turned out good and made our relationship even stronger.

Anyway, I applied to one of the companies in Alaska. I worked at a salmon processing plant in Naknek, Alaska. I applied and got interviewed (quick and easy) and few days after, I was accepted. Actually, both Aaron and I worked there. Luckily we both work the same shift and day shift. The job was easy, the only thing we have to work long period of hours. But that’s how we make the money though. 😉

Their’s plenty of us worked there, majorities were Mexican and Filipinos. In that company Mexican dominates. In our house, more than half were the Mexican, second American. Their’s just 2 Asian one from Laos and the Filipina (me). The office people thought I’m from Laos that’s why they house me with that Laos lady. Honestly, the Mexican thought I’m Mexican, the Filipinos thought I’m Chinese, American Indian, Indonesian, Korean, Japanese and etc. None of the Filipinos talk to me at first, they thought I’m a foreigner. It was a shocker to them when I started speaking in Tagalog or Bisaya.

I was really blessed with every job I had. With my first job I was happy to have a 3 nice ladies roommates. 2 were young and the other one just a little older than me. I was really happy because all of them are caring people. I never had any problems or misunderstanding with them. 3 of us worked the same shift. Before going to bed we would talk about what’s happening with our day and stuff. It was really a joy for me to be around them. I was there for my first job for 45 days.

I started my day there at 7 am and end 11 pm. 16 hours of work each day. It was really grueling at the end of the day. But I am not going to complain. You know why? Theirs plenty of older people that work there. My best buddies there she’s 74 years old. She never complains of back pain and such. She’s even happy if we worked 7 days a week. I’ve seen plenty men and women over 60 years old that worked there. To tell you honestly, the older people are the one that would survive the whole season than the younger one. I’ve seen and heard many young kids quit in just a few days of working there. Aaron almost quit coz he had infected foot due to his boots. Luckily he decided to stay until the end of the season. I’m really proud of him for that.

Aaron and I stayed in that part of Alaska just for 45 days. It’s shorter season there. Most of the workers there transfer to a different location after the season end. They will work at the cannery (owned by same company) which located in Kodiak, Alaska. They will work there until November.

It was interesting reading about your experience in Alaska. Thank you for sharing and merry Christmas to you and yours!

Hi Jay – Thank you so much.

Happy Holidays to you and your family too. God bless!

Hi Feyma,I liked your post,I agree with you the older folks almost always last longer than the younger crowd.I also spend the summers in Bristol bay,five years ago we tendered salmon for red salmon cannery I really like that company.We know tender mainly in Ugashik district but make a delivery to naknek once or twice a year..Like you we leave towards the end of june,I am from Kodiak but we finish our contract in the homer and kenai area.Hope you and your family a happy holiday season.

Hi Wayne – Thank you. Yep, that seems to be what’s happening in both company that I work with. Both the younger kids quit easily than the older one.

Red Salmon is a good company to work too. Nice people. Just short season there. Yep, many of my coworkers do transfer to Kodiak after the seasons end in NakNek.

Happy Holidays to you too and your family. Have a blessed 2018. God bless!

Zena and I are happy to see that you enjoy your experience in Alaska. We look forward to read your next post. In meanwhile we wish you a Merry Christmas to you, Santa ?, and your lovely family.

Merry Christmas to the Marcotte family.

Thank you. Merry Christmas to you both. Have a blessed 2018. God bless!