Random Days in the Philippines for August 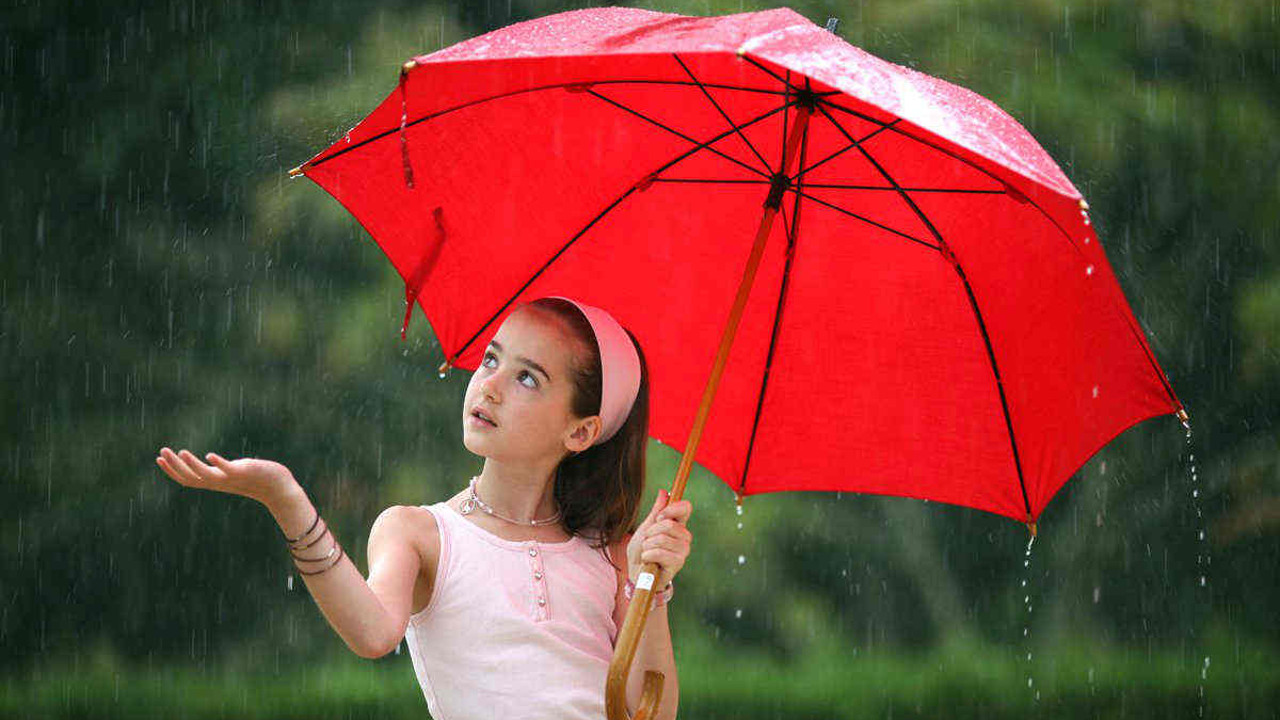 This is the next compilation of a few of the assorted days I’ve experienced in the Republic of the Philippines.

As a tyke in Boston in the 1950’s my four brothers and I all played in the street we lived on, we were separated by age groups as every other house had large families too. It was also the first time I heard the expression “Happy Noise” by a neighbor talking to my father. I mean 25 to 40 kids all playing games and shouting and laughing, and hated by the one old curmudgeon Mr. Burns from up the street.

Many parents were also sitting outside on porches and on stoops to correct and referee our wee ones. When the street lights came on, it was over; it was time for us to go home. (Making Mr. Burns very happy.)

Many years later in Olongapo City, I’m having a beer with a shipmate on my patio when he turns and said: “How can you stand that noise outside your gate?” I said what noise? Do you mean the kids running and shrieking in joy? Wow, my buddy was Mr. Burns from 1955 on my street back in Boston.

Would he have understood if I explained Happy Noise? I doubt it, some folks just are stooped in negativity, and it makes them feel good. 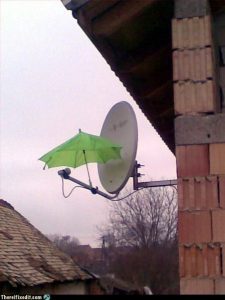 When we moved to the new house in Bataan in 1999, there were a new group of kids hooping and hollowing outside my new gate. It felt natural and now I had grandkids and a lot of nieces and nephews out in the mix too. All those kids are grown now, but there is a new group of kids and parents sitting outside with them. I still like to go out and sit. Happy Noise, yup that’s the name for it.

I know you don’t watch TV 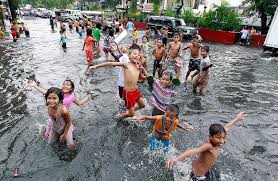 During the Rainy season playing

…But! The other day it was raining and the satellite dish was blinking on and offline, so instead of watching “Little House on the Prairie” I went back to the computer. I know, what the hell is a retired sailor doing watching that old show on a rainy day.

Many TV shows that most folks watched in the 1960’s thru the 1980’s I never saw as I was on ships in the North and South Atlantic, the North and South Pacific and various and sundry other oceans and Seas scattered about the globe. The Indian Ocean too! None of those ships had internet in those days.

But then the house started shaking and trembling. It lasted about 45 seconds and when it was over I went downstairs and called out the front door to my wife and her twin sister tho come in out of the rain as it was over. The funny part was as they ran out the front door they bypassed the umbrella holder. I’ve been in earthquakes many times before, so I know tremors from the real deal. I don’t like them but like all else, it is part of living on the Pacific Rim. 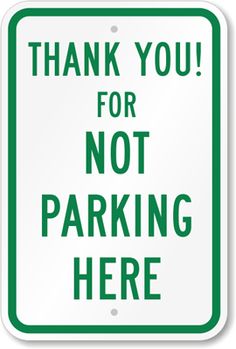 You can’t park here: My wife was driving and we pulled into the Strip Mall on Subic Freeport where our Dentist was located. There are 15 slots and 3 cars, but all the empty slots had a reserved sign blocking them. I saw the sign with my Dentist name on it. And I got out and moved it. While my wife was parking the car, a private guard ran out and said; “You can’t park there.” My rule has always been, never argue with a guy with a 9 MM handgun (No matter how banged up the weapon was) that was strapped to his side. It is a good rule indeed.

I smiled and explained that we had an appointment with that dentist in 15 minutes and that is why we parked there. He replied; “Sir I understand that, but it is my duty to check with the driver and then I move the sign.” I wish I knew this before, as the damn sign had a cement base and was heavy. 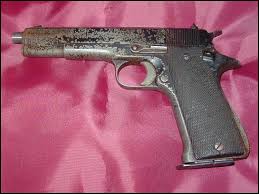 Quickly I apologized politely and explained that I didn’t know the rule and it would never happen again. A face was saved, the handgun remained holstered, and peace was restored. Then my wife Mayang approached and it was the old home week in the parking lot the Tagalog was flying hands were waving and I was set to run, but my cane stopped me. Why was my wife arguing with this man, I had just solved the problem? The reason for it was because they were high school batch mates from Gordon Heights and long lost friends. The reunion commenced.

Why is it when people talk in Asia, it sounds like they are shouting at each other to my old half deaf Kano ears?  We were now late for the appointment? Nah we were on Philippine time.

Please write down and send to Bob Martin any situations you may encounter while living on these 7,000 plus Islands of Enchantment. “Just like Facebook” sharing is good.”

Paul: I always enjoy your stories with my Monday morning coffee. I also do not understand people who are bugged by the happy sounds of children. They are one of life’s joys. Thank you, Rob

Rob;
Everywhere I ever lived around the world the happy noise was there in fifty different languages. We were all once part of it (Except Mr. Burns from Boston) So since we all did it we have no right to complain about.it. (LOL) I saw some thing here I never saw in Boston, on a rainy day mothers shampooing their little daughters hair and then sending them back out in the street to rinse..

We had a playing field at the back of our last house, the council had some spare play equipment and started to prepare to put a bouncy type of play equipment on the field. A member of the committee which were supposed to look after the field, told them to take it away. When asked why he said there would be too much noise. I thought twat, if there are four pieces of equipment and twenty kids, you get the noise of 20 kids. It would be the same noise if the field was full of things for them to… Read more »

Marjorie this could be my second response to your comment, as a brown out happened and the puter shut down. But the generator has gas and I’ll try again. (LOL) My Street bordered the Garvey Park in Dorchester (The area of Boston that was a city before Boston) We had a Hockey Rink, when no ice you could play Basketball there, a Baseball field that could be converted to (American) Football and a fenced in area with swings and other kids stuff. Now up the street on Neponsit AVE. was a new Fire Barn with alarms and racing fire trucks.… Read more »

Heck Paul, in barrio Salaza (Palauig, Zambales) of my youth, kids couldn’t wait until it got dark to play games they couldn’t play during the day because of the heat of the burning sun. Instead of going home when darkness fell as Boston kids did decades ago, Salaza kids went out on the streets at night to play games Boston kids never heard of – patintero, tumbang preso and tagoan, to name a few. Kids are the same everywhere – when Filipino kids play, they make happy noises. Although they didn’t have a Mr. Burns to contend with, Filipino kids… Read more »

John; Maria Clara, is also the name of the Adobo twins, I’m married to Maria, I never figured out were they named after the national dress or the local Sangria? Our street lights came on in the summer about 2030 (8:30 PM) So we also played in the cool of the evening. City streets are hot during the day. I’d wager that if I named the games we played no Filipino kid would understand it either. But a bigger wager would be, if we put them all together, they would figure them out with super speed, and the Happy Noise… Read more »

Maria Clara is a fictional character created by Jose Rizal in his novel, “Noli Me Tangere. In the novel, Rizal cast her as the ideal image of Filipino womanhood – the “epitome of virtue; “demure and self-effacing” and endowed with beauty, grace and charm”. Maria Clara has since become the embodiment of the ideal Filipina in Filipino culture.

John;
So the dress and Sangria are not named Maria Clara? The poor Adobo twins! (LOL)

I,m moving to the phillipines on the 3rd September this year to get married to my Filipino fiancee of 3 years with me being from the uk and want to buy a house there have you to be a resident for 12 months to do this..Danny.

Hi Danny;
Check with Bob Martin for the exact facts, as far as I know, your wife can own a house you may not, but my name is on the paperwork as a co-owner on our house… I recommend you contact the Site Owner above and I promise he’ll provide you with all you need to know.
BTW Congratulations on you upcoming marriage, all the best to you both!

Paul,
Kid’s playing in the street is indeed “happy noise”. We never played in the street as we lived out in the country, so we played softball on an empty lot till dusk. I had been watching “Magnum PI” here until a couple of months ago when they replaced it with “Little House on the Prairie”.

Papaduck;
As I said above most of the shows on HITS are my first time seeing them, but Little House is my favorite (No one gets shot.)My summers were mostly spent on Cape Cod, and that is country, all our empty lots were covered with trees. (lOL)