Finally Mayor Duterte of Davao decided to run for President of the Philippines in the election in 2016. For Partido Demokratiko Pilipino-Lakas ng Bayan (PDP-LABAN). Many Filipinos are thrilled with his decision especially the Mindanaoans. Really when Mayor Rody said a few months ago that he is not interested to run, many people of the Philippines were disappointed. I know that we were. Even when Aaron was still in the USA, he would tell us that if we heard from the news that Rody filed for his candidacy as president to let him know no matter what time it is in the States. Ha ha ha, in our household we are serious in supporting Duterte for president. 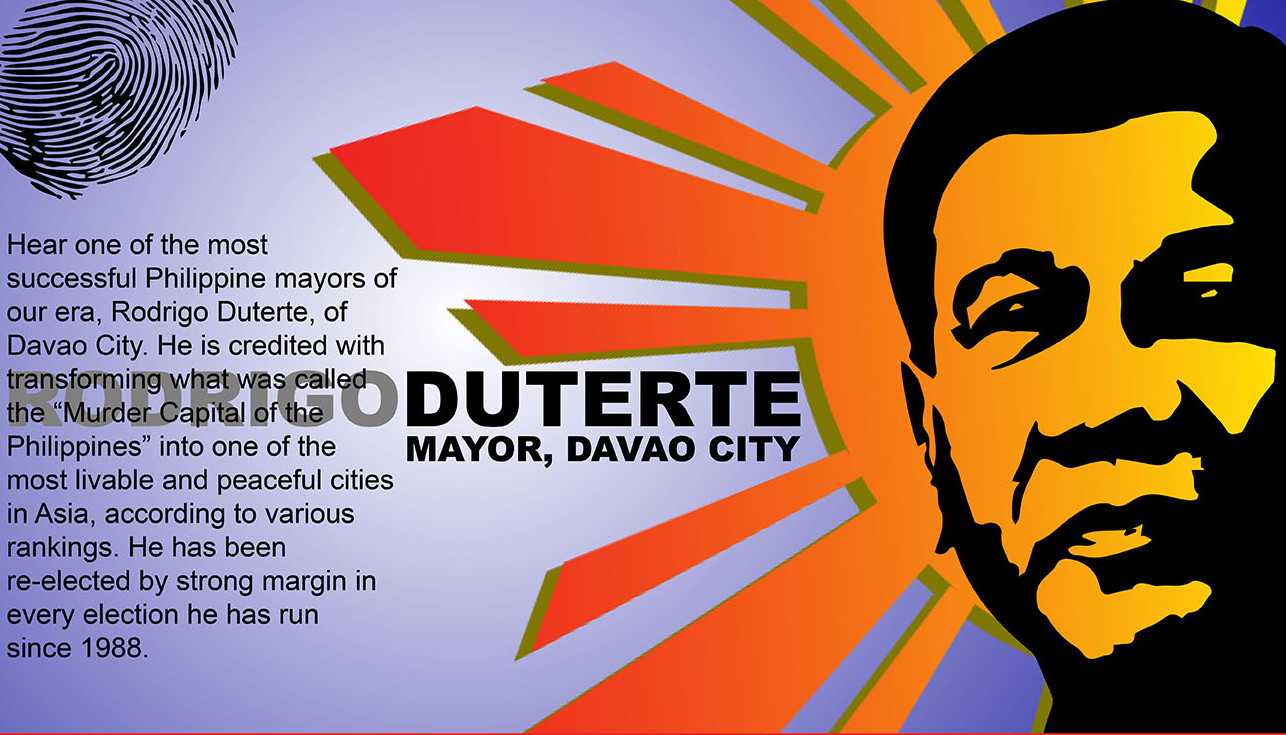 I know that the mayor has many enemies too especially the drug users/dealers and those other criminals, but I think the country needs a leader who is tough and not afraid of anything. It would be interesting to see how he will be living in Malacanang. I’ve heard from friends that knows him well that he always welcome poor people in his house. I’m wondering if he will do that kind of stuff in Malacanang. I know one thing he does here in Davao he welcome those indigenous people from the province and bring them to the city and feed them.

If Rody wins, I think he will be the first Mindanaoan to be the president of the Philippines. I think it’s time to have one from this island. It’s just tiring to see that it’s always people from Luzon who run the country and they don’t know much about Mindanao. I hope all of us in the south of Luzon will unite and vote for Rody. Even before he said he will run for president, I’ve seen many cars with his name already something like “Duterte for 2016“, Rody for President“, “Duterte 2016, Ato ni Bai“, “Digong for President” and many others. 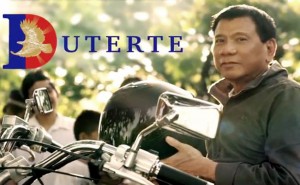 I am wondering though if he also will ban the smoking all over the Philippines. I’m not sure what the smokers think of not smoking wherever they want. Here in Davao, you can smoke at the designated area the businesses have. For smokers I advise you to follow the law here if you don’t want to be just like that foreigner that was forced to swallow the cigarette butt in-front of the business owner. I wonder what the cigarette company thinks of him running for president? They might pay big money for campaign against Duterte. I’m pretty sure they are not happy of Duterte running the country and cut the profit of their business. We’ll see in the next few months what will the cigarette do. 🙂

I am really encouraging the Filipino people to vote for Duterte. This country needs a tough leader. I am also calling for the people of Mindanao to vote for him. It’s time for the Mindanaoan to have a voice. Take a look at all the improvements in the country, it’s all focused in the Luzon area.

This has always intrigued me. How could a mayor get away with pulling a gun on someone and threatening their life if they do not pick up and eat a spent cigarette butt off from the ground. Honestly if the guy didn’t do it was he planning on shooting him over it? I fully support order and discipline but what is the punishment for smoking and littering in Davao? Is it to pay a fine, serve jail time, or does your life get threatened if you don’t pick it up and eat it. Is there not a threat law on… Read more »

Hi Gary – As far as I know Duterte did not used gun to that tourist guy. It’s the law here to not smoke anywhere. Most establishment here has a smoking area. I haven’t heard of the Duterte shooting anybody here. Did you see him shoot somebody here? I’ve lived here for almost 15 years never heard of Duterte shooting someone.

Human rights head people from Manila already came here to investigate about Duterte and came out nothing. So it shows no crime committed by Duterte.

Happy Thanksgiving to you too Gary and to your family!

Unfortunately Duterte is not suitable as president! He will do no good for PH domestic nor international. This man is a cowboy with too simple quick answers for complicated issues.

Hi Martin, I’m surprised of your assessment of Duterte. You might not know that he is a lawyer. Have you seen his show on Sunday morning. He can answer questions well. You might not agree on his answer.

We already gave lots of chances from worse to worst Presidents & now it’s our chance to own the best President who can handle the tough Pinoys . Go 4 DU 30 ! Nothing can stop us now !

I am highly impressed that the whole good family like my heartfelt comments & so glad that we are riding on the same boat steaming straight into the port of victory !

You’re welcome Ben. Happy Thanksgiving Day to you and your family too. God bless!

He just might the the only man in the country who can bring badly needed discipline to the people of this country.

i will pray a lot for him….he’s the only one

good luck Rody your certainly going to need it. One man will never be able to break down the system of corruption that has been adopted by the country’s power brokers for many years now. Hopefully you can appoint a team of like minded individuals to assist you. At the same time there will plenty of opponents working to bring you down if appointed, as the corruption suits their greedy ambitions.

Hi David, yes it will take time for sure, but hopefully Duterte can starts bringing the country into proper order. Discipline is a must in this country. Thanks for the comment!

David,
Your quote “there will be plenty of opponents working to bring you down if appointed”

That is pretty much true anywhere, even in the US from what I see.

Be careful what you wish for…. the iron fist could come down on you. Seems Marcos had an iron fist also…. how’d that work out…. so people who don’t smoke have more important rights than those that do ? Maybe expats should be taxed for the privilege of living in PI to pay for the poor. I mean hey why not…if we’re picking winners and losers….. freedom and liberty for all….. not the vhosen

My wife was. Yes. Her family was yes. Your entitled to your opinion. Mayor is different than president. So is the difference between judge and jury.

Marcos ruled the country bad, what was yours all belong to them. Duterte is what the Philippines needs now. Someone to clean house and have consequences for actions.

Brent… Marcos cleaned house of those he deemed wrong. And the consequences are well known. It is the same mind set with different victims. It is not liberty. But ok y’all get what ya pay for. Second verse same as the first.

What i have learn from people that dont like or dont agree with Duterte are people that have never lived or been in Davao and see how clean and safe it is. They only know what some news person reported from hearsay from someone visiting manila.

I have been and know…. whstever….
Choose who gets ” ruled”….and who gets blessed…. it ain’t democracy, it ain’t a republic. It ain’t free.

At least this man is trying to sort things out in the Philippines. Crime is punished in Davao. Who do we want as president. Corruption king vice pres Binay? Has been proven that Binay is corrupt with all his land ownership plus numerous bank accounts with millions in them. Yet they still let him run and people actually support him! From what my wife tells me Duterte is doing great things in Davao. I suspect that he will be polished off by someone though. Just the way things are handled here if somebody actually tries to bring HONESTY to the… Read more »

Hi Adam – Very true. I don’t think he would be polished off because he is very strong and proactive. I hope and pray that he succeeds. Go DU30!!!

Duterte became possible because crime was rampant in the 1970s and 1980s in Davao. Order came when bodies of suspected drug dealers started turning up. I know because I had relatives who lived there. I remember reading in the papers of shootouts in Davao. I’ve been to Davao and admired the orderliness. I understand that people there have seen the benefits of law and order. But it’s not enough reason for me to want someone like Duterte. I know that fear also drives people to discipline, not just fear of the law. Duterte became possible because he makes shortcuts in… Read more »

Norman, excellent writing… BRAVO…!!!
You forgot to add one thing; presidents are SELECTED and not elected…
Big difference… unfortunately.
Not many people know this.

Well said Norman. Voting in Duterte carries big risks, a risk I would not accept if I were Filipino. An American voting for Donald Trump also carries risks, and I still would not take that much smaller risk. There are some very strange politics for 2016 in the PI and the US. If Duterte and Trump win I think I will move to Italy! God help us all.