My Daughter Hanna, Chris and my super granddaughter Coleen arrived at our house after a swimming competition Coleen had in Manila all week. I was of course very happy to see them all. And to hear of my granddaughter’s triumphs and silver and gold medals she won. But that’s enough grandfatherly bragging.

While sitting in the living room (Parlor in Boston speak) with my grandson Jaden and his Lego set, I put the Lego’s together and he takes them apart it works out to an equal division of labor. Out of the corner of my eye, I spy Colleen (My Granddaughter) open a bag and take out a jar of white stuff and spread it on bread and commence to chow down on whatever it was.

Here in Asia for all I know it could be fish entrails or something else that I don’t even want to smell let alone consume. But the jar had a hauntingly familiar look to it, but I quickly put it out of mind and went back to my Lego construction and destruction time with Jaden the uncontrolled child of all things disassembling and tossing into the air with glee, he is a two year old just doing what he is supposed to do.

Then my Daughter Yhen the dutiful mother of the Lil’ Dude swept him away as mother’s often do when their child seems like he’s really having a good time. As both a son and a father I fully understand that move, yet I’ve never understood the why of it.

With my Lego mate in the wind I put the bricks back into their box and I’ll just assume that I did also that wrong, and failed to follow Lego etiquette. Oh well! 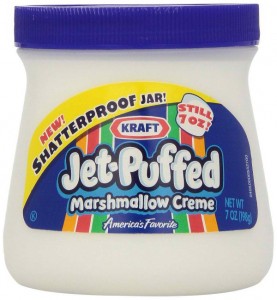 I meander into the kitchen and on the table was the mysterious jar that I’d seen my granddaughter partake from and in total shock I saw what it truly was. A small jar of Kraft Marshmallow cream, Okay so it wasn’t the better brand of “Marshmallow Fluff” but it was marshmallow cream just the same, and a taste treat that I’d not enjoyed in over 20 years. Alright I admit I was born and raised in the Dorchester section of Boston, a largely mixed group of ethic identities who all have a love for the local treat of a “Fluffernutter” sandwich. No matter what part of the world our forefathers hailed from.

I snatched it off the table and peered at the label; I opened the jar and inhaled the aromatic aroma that whiffed up to my nostrils from the jar. I almost wept, but I manned up and asked my Daughter where this treasure had been procured?

The dreaded words came forth, that set me into a funk; “Mega Manila, Daddy!” Of course it would be from there why would I even hope to dream it could have been found somewhere else? Paul sometimes you are a foolish man and a cockeyed dreamer. 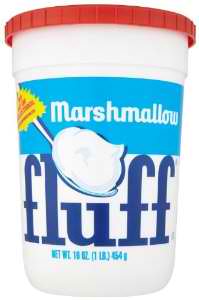 My granddaughter looked at me with here beautiful brown eyes and said the words that all grandfathers long to here. It’s for you Lolo Can you hear that heavenly choir singing Mendelssohn’s Messiah (Or Hallelujah) as I dashed down to the store for a loaf of fresh bread, as day old just wouldn’t do. Now with the fresh bread I opened a new jar of Jif Peanut butter, then I requested silence, and bit into my First Fluffernutter this millennium…
I’m sorry I’m got so choked up that I had to leave the room, to weep with happiness. But as I said in the title; “Sometimes it’s the little things!”

Shipping: Currently, this item can be shipped only within the U.S. and to APO/FPO addresses. So not to the Philippines, Ah but being retired Navy I have an APO FPO address at the Retired Affairs Office. But they won’t accept any package over 15 Ounces. Doomed I tell you, I’m doomed. For as much as I want it I refuse to roam around Mega Manila looking for it, because I know I will only be told; “Not In Stock Sir” even if they have a back room full of it.

When you enjoy, enjoy, enjoy
your fluff and peanut butter
you’re glad you have enough for another Fluffernutter.

NOTE:
The Fluffernutter sandwich is more than a beloved memory of childhood, it’s a local tradition. As a traditional food of New England, it goes right alongside the baked beans and clam chowder.

NEWS FLASH:
Homemade Marshmallow Fluff/Cream Recipe: I found this on the interweb Al Gore thingy. If you want it I’ll add it to the comment section.

Paul you just took me back to my grandparents house as a child many summer lunches with the fluf. and grandmas homemade lemonaid. Some of my best memories as a child.

Nathan;
It’s funny how a song or a smell or even reading something can cause those memories to flow. Kinda’ nice don’t cha think

I’m fairly sure that is not even possible for Paul. He must have hired a ghost writer! 🙂

Tom;
I once told a sailor that I was going to write him a set of evaluation that he would love and that would prevent him from receiving a promotion. Plus I dis it my self with a few Crayons. (lol)

Ha ha.. he did it, Tom. Come on, let’s give him credit for his achievement! 🙂

Great article, Paul! It’s amazing what ends up being important as we get older.

Tom;
Most often the memory will out shine the actual event. But the sandwich sure did taste great.

I have no idea of what “Marshmallow Fluff” of “Fluffernutter” is since i’m not from US or Dorchester.

From you description i can imagine what it means to you, must be the same if someone brought “Leverpostej” to mere here in Philippines.

It’s always a pleasure to start Monday morning with you weekly post, no matter if it’s about house, car or Fluffernutter. I swallow it all 🙂
Axel

Axel;
How I long for some “Leverpostej” as I sit here writing this, like you and Fluff, I haven’t a clue, but I’d give it a try. Europe would love Marshmallow Fluff.(LOL)

I’m beginning to think that the “little things” are the only things that truly really matter. Something we expats learn to appreciate more every day in this country. One of my other most favorite places is Boston, where I lived my young post-college life. I practically spit out my breakfast laughing at “parlor” (aka Paah-lah) and hearing “Dah-chestah” in my head while reading further down. One of my best friends at the time was from Medford (Meh-feh) and I just vividly recalled a trip with him up to Kennebunkport to his family “summah” house, where we enjoyed FlutterNutter sandwiches for… Read more »

John;
Ahh come on we don’t talk like that! Wait a minute your right all my brothers do. But the Navy guys I sailed with did after a long battle get me to say “BEER” vice “BE’AH” and stop saying Wicked Pissa’
Kennebunkport home of some of the best Salt Water Taffy I ever had, damn now I want some of them!
One of my most treasured memories was when we asked directions from a Maine local and he looked at us and said; Ah-up, you can’t get there from here!”

Never heard of or had a fluffernutter before Paul, we used good ol grape jelly. I sent 3 jars of Jet-puffed cream back to my in-laws there in the PR, along with chocolate chips and pecans so they could make our family Christmas favorite, fudge. I also sent them the recipe my mom had always used to make it, unfortunately missing from the recipe was to say that the chocolate chips needed to be melted in a double broiler, so it wouldn’t burn the chocolate as it melted, needless to say it burned, apparently quite bad, they could not figure… Read more »

Bill S.
Welch’s Grape jelly was a New England PP&J staple too, but some days nothing but a FlutterNutterwill do.
Double Boiler is a rare thing here but I found one, I called my mother 20 years ago and asked why my fresh made whipped cream came out so bad? A stainless Steel bowl that I lacked was the reason. You do need the proper tools.

You know, Paul, as a card-carry diabetic, I know full well that I am suppose to stay away from Marshmallow in any form. However, it’s just so damn good. Waste it on bread … not me. I get a big spoon, slowly open the jar lid, look over both shoulders to see if anyone is watching me, and then plunge that spoon into the marshmallow and deposit a big scoop right in my mouth! I also find the little round marshmallows useful to sweeten coffee.

Richard;
And I also like a big dollop on the tongue, but I chase it with peanut butter (Jif of course) LOL

Now I have to try that, lol!

Cheryll Ann;
It will be something that will make you wonder: “How did I get through life without knowing about that?”

Paul,
The fluff is also good for making s”mores and rice krispie treats that I know your Colleen and the lil dude would love.

Randy;
I forgot about those two things, thanks for the reminder.

Just because the “Fluffernutter” was invented in Massachusetts during WWI, doesn’t mean we didn’t eat them in Chicago! They sure were a treat when I was growing up. Now my mouth is watering.

RandyL;
It’s like beer and pizza, the idea spread west.