The US Navy had an agreement with the Philippine government that as long as the US had bases in their country Filipino’s could join the US Navy. But because of security requirements the jobs within the US Navy were restricted to the ones that didn’t require US Citizenship. The Royal Navy had a similar agreement with China albeit the British did not enlist them but hired them as contract labor on the ships to run the laundry and other tasks.

In 1964 most of the Filipino’s worked in Food Service but others after receiving US Citizenship branched into all fields and ratings (Jobs) within the Navy. But not surprising because of their love of cooking many stayed in the cooking field as did other groups of Navy personal, My Brother Dan was a Navy cook.

The term side pot has morphed into a term meaning girlfriend but its origin is; “What is the extra food? As the Pinoy crew members would go through the chow line the cooks always had a side pot of something pure Filipino to eat. But it was also available to any crew member if the American style food didn’t appeal to them. 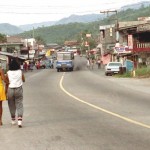 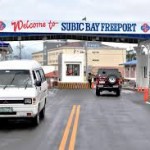 The old main gate 4 years ago 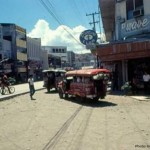 Magsaysay and Gorden Ave in the 80s 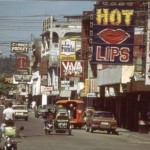 Magsaysay in the 80s 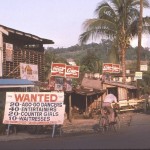 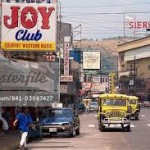 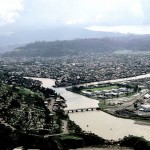 Olongapo_view from the zig-zag graveyard 1970’s 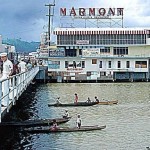 So it literally meant something on the side, which later would come to mean girlfriend to those who Butterfly around.

The same side pot rules applied on the merchant ship’s I rode. On Thursday nights on one ship (USNS San Jose) it was Philippine Night and it was an all Filipino menu. As I went to the chow line I asked the head cook Rolando what the side pot was. He looked at me with questions marks in his eyes and scratched his head. I said you should have cheeseburgers for those who don’t want Adobo it seems only fair.

Well we did have a laugh about that and the other Filipino’s started calling me Side Pot Paul, I was lucky I was still single at the time But the next Thursday night Rolando had hamburgers as the side pot, and told me that it only seemed fair. The Chief Steward, who was also my friend and fellow street runner, thought that was funny and told every cook in the fleet. But even all these years later if there is a party at my house there will always be a hamburger on the grill’s side pot, and it is very popular with everybody, but especially the kids.

So there I was an Irish kid from Boston meeting my very first people from the Philippines in San Diego Boot Camp in 1964, since I’d studied their country in geography class at Minot Elementary School in Dorchester MA. I had many questions for those guys. But a few years later as my ship steamed past Grande Island into Subic Bay, I found that those guys hadn’t told me everything.

Forty plus years have passed since that wonderful day in 1969; I’ve forgiven those guys that withheld certain information from this impressionable young lad from Boston, for as I reflect back on it, I realized I never would have believed them! I mean really, imagine the term side pot having two meanings!

It wasnt just PINOY who weren’t allowed to serve beyond S-Division. Admiral Zumwalt “Z gram” opened the door for minorities to strike for other ratings, and when we acquire US citizenship can even switch to a security sensitive ratings.

Edgardo;
You are very correct, but the reason I singled out Pinoy’s was because the story was about a Filipino term (Side Pot) and it took place with Filipino’s in the Navy. on a Philippines based web site. My apologies to any other countries and their people I omitted and had no intervention of slighting them.
Bud Zumwalt “Z” grams also allowed me to wear civvies off the ship and grow my hair a tad longer.

The good ole days. Pulling into the bay it was drizzling and in town it was sizzling. Magsaysay was one of a kind or at least the best of its kind. Paradise to many, hell to some. But it will never be replicated.

Loren;
When you enlisted the Spanish Gate was the only gate into town! (LOL) I’ll buy you a boat drink for that comment! But you’re right it has passed into history, and I like the New Improved Olongapo City.

So many memories you must have…

Queenie;
Only the memories I can remember, there are a lot of blank spots. (lol) But yes the world was a hell of a lot of fun.
Believe it or not the pictures were sent to me by my eldest daughter, way before her time so that makes me wonder……………

photo of a couple of possible “side pots” ?

John;
I have reached this ripe old age by making sure all those type of photos are long gone. (LOL)

John;
Without guys like you manning those Lighthouses we never would have made it to the pier.

Hi Paul, great post again makes my Monday morning reading them you sure have fantastic memories, you been there done that got the badge they could make a film about your life,
God only knows how many times you have been round the world ,
Keep the stories coming love reading them, Derek in pasig.

Derek;
One actual around the world cruise, onboard ship, I couldn’t count airplane rides to pick up ships all over the world (Except Antarctica) But those days are over and I envy the guys still doing it. The movie would be X-rated, before I married, but G-Rated now.(lol)

Great Article Paul. You hit the Philippines just a few months before me. (I was shore based). I was transefered to the Comm. Sta at San Antonio about 30 kilometers up the road from Subic in Earily 1970. And I lived there for 3 years. My wife-at-tthat-time &I hit the exchange at Subic several times a month after she joined me from the States. And I thought that I knew a lot about the Philippines. But when I came back in 2007 to met Katleen (we married in 2008) I found out how much I did not know and the… Read more »

Luke; Station Ditto I never was, so you are up on me in that score, I still go out by your old duty station to visit friends at the FRA. Nice part of the PI. The food I eat it but I still like American chow more. But I do eat rice when I want thousands of something to eat. When I only want a few I eat French fries. (lol) Like you I do find the people beat the states hands down for warmth and kindness, I prove that by reading comments by liberals on Facebook, wow they are… Read more »

BTW – my friend just opened a new Sports Bar in Subic. Liberty, first bar for those just coming off the ships.

Don;
In the Barrio is a place called the Liberty Call owned by a lady named Riza who was married to a Shipmate who passed?

Great article Paul, it brought back memories and as usual with your articles I learned something (which means today is another day _not_ wasted). Just for the record, though, non US citizen Filipinos still can enlist in the US Navy (or other DoD departments). It’s much more restrictive than in the days you are talking about, because the candidate has to have a Green Card or other legal means of entering the USA, and they must attain US citizenship before being allowed to reenlist, but their are expedited ways to do this easily during the first hitch. Doubt it will… Read more »

Dave;
Back then nothing towards the path to US Citizenship was required to enlist and they could remain a Citizen of the Philippines their entire career, albeit I never knew of any of the guys that did it that way. The liberals who avoided serving back in our day ended up teaching our youth to the evil of the Military industrial complex and the silly idea of service to our country. In only two generations they won.

Denzil;
There really is no response to that! (lol)