A trip to Angeles City

My friends Don and Teody are in from San Diego for a few months and have a house a few minute walk up the street from me. When they visit they’ll normally stay for a few months but Don must make trips to Japan and Korea as part of a working contract. (BTW Don is also retired US Navy) 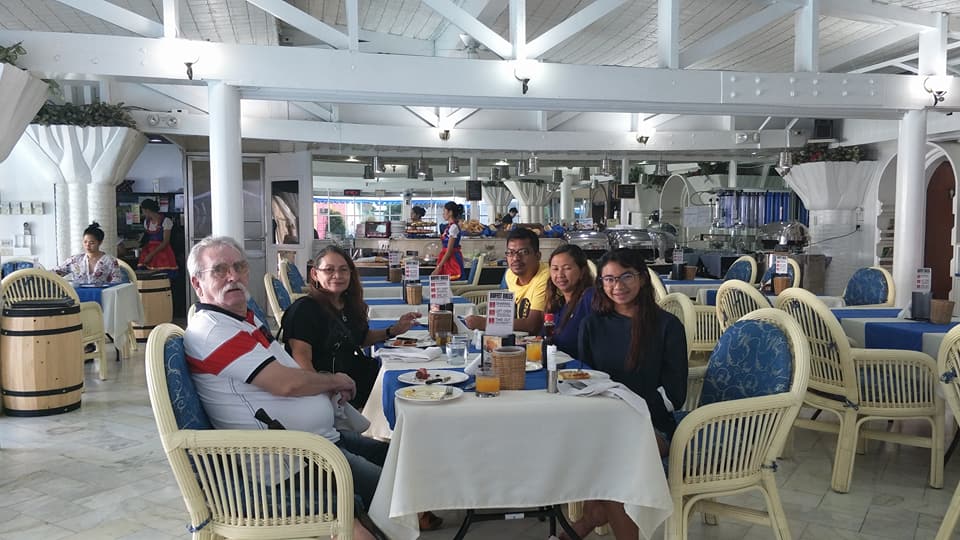 Sometimes the world just aligns to cause things to fall into place. Don needed a ride to the Clark Airport to fly to Japan for ten days or so. So I offered him a ride on 25 November, his flight was at 2300 that Saturday night, Mayang and I were spending the night at the Clarkton Hotel, which if you remember is also the home of the Monster Buffet I wrote about in Lip 11-25 (A change is a coming #03 a week or so ago. I believe four or five people read it.

But while talking to my Granddaughter she mentioned that her folks were taking her that same night to Clark Free-Port to see The Pyrofest? (I later found out that is a large Fireworks Display) at the SM Mall on Clark that same night, and returning home to Olongapo when done. 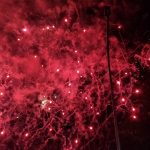 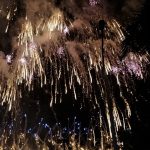 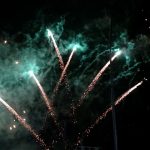 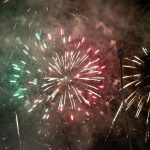 My cagy mind quickly thought; “Hey; If I offer a hotel room and a buffet dinner to them.” Then that should be good for everyone involved I would think All agreed, so Don enjoyed the meal and the Pyrofest too and got to the airport on time for his flight to Japan. See how things just workout when you don’t over plan? (LOL)
And I (Plus all others) really enjoyed the fireworks display, as good as any I’ve ever seen, my daughter somehow got Don and me into the VIP section, which had good seats and a close-up view. Albeit I did notice that the VIP section was so close that we were covered with ash from the Pyrotechnic show. So I turned to Don and said, in the United States you would never make it through security as we smell like bomb makers and are covered with ash. Thankfully the local airport can’t afford the machine. Do they have a dog? We will find out soon. They didn’t! 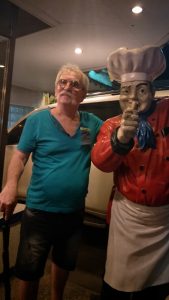 The following morning the family and I had the breakfast buffet at the hotel and I ate like a hungry old goat. I was thinking that now are we will be zooming back to the Big “PO” (Olongapo)? But I’d once more be wrong! Nope, it was decided that we were returning to the SM mall on Clark that Sunday morning to look around and window shop. I found a shop and bought three new pairs of shorts that I needed. So after ten minutes I was done and went to seek a cup of coffee. My Son-in-Law had disappeared as he does at malls. (I envy him!)

My daughter and granddaughter came with me, so I sent them to her favorite clothing store to buy herself a new outfit. I needed to be there to pay (That was a long time from now.) as the credit card is only in my name. (I paid it off within two days) My coffee was nice and next I’m at a juice Store that sells JAMBA Juice which is five flavors of fresh juice, which in fact was frozen. But the sign did say fresh! I didn’t complain as it was good! 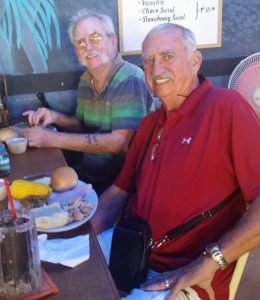 Don and I at Sit-N-Bulls for Thanksgiving

Now Mayang received a text from our granddaughter. Asking if today’s shopping was a Christmas Present. I informed her that was just Lolo Daddy Paul spoiling her!

Remember my JAMBA Juice? I was called to the store to provide payment for the new treasures… But she was not done, this is a teenage girl shopping and there were so many more decisions that were required and the Fancy Dancy store will not allow JAMBA juice inside. Who makes up these silly rules? I’m the dude with the money, but a Filipino guy (He was with his two teenage daughters) and was stuck outside with me, as inside provided no chairs for us payers… 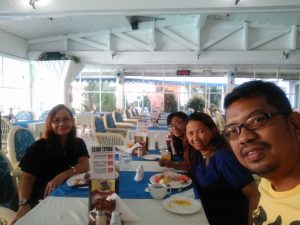 We do other stuff besides eat!

One hour later, I was summoned again to fulfill my grandfatherly (My new friend was waiting still) duties and pay the bill, the Jamba juice was now consumed and I was allowed in. My Sweetheart, Heather Colleen was smiling and she had her purchases in hand and a large smile on her pretty face. Her three hours of shopping are over, the bags were full, her Sherpa’s (Me and her Father) moving towards the awaiting car. As she turned and said thank you Lolo, it was a wonderful weekend. What more would any of us want to hear from our daughter or granddaughter?

Now take me home I need a nap!

The last line What more would any of us want to hear from our daughter or granddaughter?” Then I remembered that we might have sons or grandsons that we love too! (I do)

Loren;
Believe it or not, Don and I were talking about you, Tommy and Bully, and the tears were flowing like a snow melt off a Colorado Mountain Top in spring. Truly a sad experience. We wished you were there. But Thanksgiving we ran into Anthony at the Sit-‘n-Bull and told him to say HI to you two. .

Paul,
No better way then spending time with your family and making your Granddaughter happy. We will be heading back to Angeles for Christmas Eve/Christmas to spend time with Anne’s family there. Looking forward to eating Christmas Buffet at the Clarkton.

PappaDuck;
I’ll bet that Christmas Buffet will be fantastic! Enjoy your visit with the family.

You and Anne enjoy your Christmas in Angeles, Randy. As for me and my wife, we will not be spending this Christmas in the Philippines for the first time in 4 years. Maybe, next year again.

John,
Good to here from you. I was wondering how you are doing. Don’t know where we will be next Christmas. We could be in the US depending if things fall into place by then. Hope you and your family have a wonderful Christmas and great New Year and who knows maybe we will see you guys next year.

Paul, looks like you are starting to gain your weight back. Must be the reason for the new shorts.

Dennis;
Needing new shorts because I’ve gained weight, where would you get an idea like that? Pretty good because you are so right! (LOL) I’m getting fat in my old age.

Hi Paul,
Enjoyed the read! Never travel to the USA with a ham sandwich in your carry on luggage. The dogs will come to you and TSA will figure you were trying to mask the smell of a bomb or drugs with a ham sandwich. Missed a connection that way almost had to spend a night in Houston. Houstonians make barbecue out of cow instead of pig. I was ready to get home.

Jay;
I do love Carolina Pork BBQ, plus pulled chicken or pork, but I also like Texas Beef BBQ. The same with ribs, I like them both, but baby back is my number one choice.
You’ll never go wrong with a Carolina smoked ham too. I have an ex-wife I left in Southport NC in 1969.
Damn I’m hungry now! Why would you bring a ham sandwich on a

Long story on ham sandwiches actually not that good of a story. Kind of boring. Just chalk it up to me being not the sharpest tool in the tool box. Sorry to make you hungry. I am guessing by your girth you got your insides working again after your surgery.

Jay;
It took eight years in the Navy to go from a 28 in. waist to a 32 in.waist, then stayed 32 until I had the surgery now I’ve gone from 32 to 36 in two years and I don’t like it. One of my dogs and I go for a slow walk every day, but I’m not losing the weight! Oh well, oh hell, I’ll assume it is another new normal…(LOL)