I’m Not Fooling, the Weather is Cooling!

Most years the Philippine weather is as predictable as a politicians lie. We take it for granted and we are only surprised when it doesn’t happen the normal way. Here in Dinalupihan Bataan some things are a “For Sure”. Stand in front of your house, or pretty much anywhere for that matter. Take a kid, he or she doesn’t have to be yours, give him/her a Nerf ball and ask them to close their eyes, spin them three times and have them launch the ball into the air I predict the ball will hit a Toyota Innova or a stray dog walking or sleeping on the street. I used to do this using a rock, but broken windows and injured dogs made me switch to the Nerf ball, plus the kid gets to keep the ball, and none of us have to run away. But the point will be made. 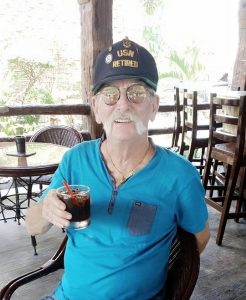 I missed most of the very hot season mid February to mid May because I was visiting Bay Pointe hospital with constant A/C and the drugs they were giving me. But on 12 May I was kicked out and sent home to the Hot Weather. While sitting out in the front, I noticed that no city water was flowing through my pipes during the day, but at night the tanks would fill, the rainy season had not started yet.

I foolishly told 7 lifelong Filipinos that the rainy season would start on the 15th of May as it had every year that I had been here during the last few decades. Once more, I got that “What does a Kano know look!” These people had been on the Philippines Islands their entire lives. 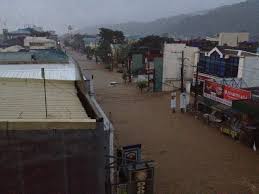 Olongapo City knows what a rainy day looks like

The morning of the 15th, in the distance there was a slight rumbling of thunder from the heavens while we were sitting out front drinking coffee, and a few family members were smiling and sticking their hands out from under the patio tent and showing me their dry hands. I smiled and said; “Oh yee of little faith!” But, then at 1600(4PM) they came up to my room, pulled me out of my nap and then led me to the roof to point to the sky to view the falling rain. I’ll admit it was not a deluge, and it lasted less than 15 minutes, but hot damn it was precipitation, by any other name it was rain. BTW it happened every day after until it started coming in full gully washers. Chickens were angry, but the ducks were ecstatic. My legend expanded, throughout the purok.

Now when the rainy season ends it is a duck of a different color, normally in my neck of the woods it’s the end of November, but we always get the late in the season typhoons with all the names they have, for them and some consider that still part of the rainy season, but I say nothing, keeping that legend alive. 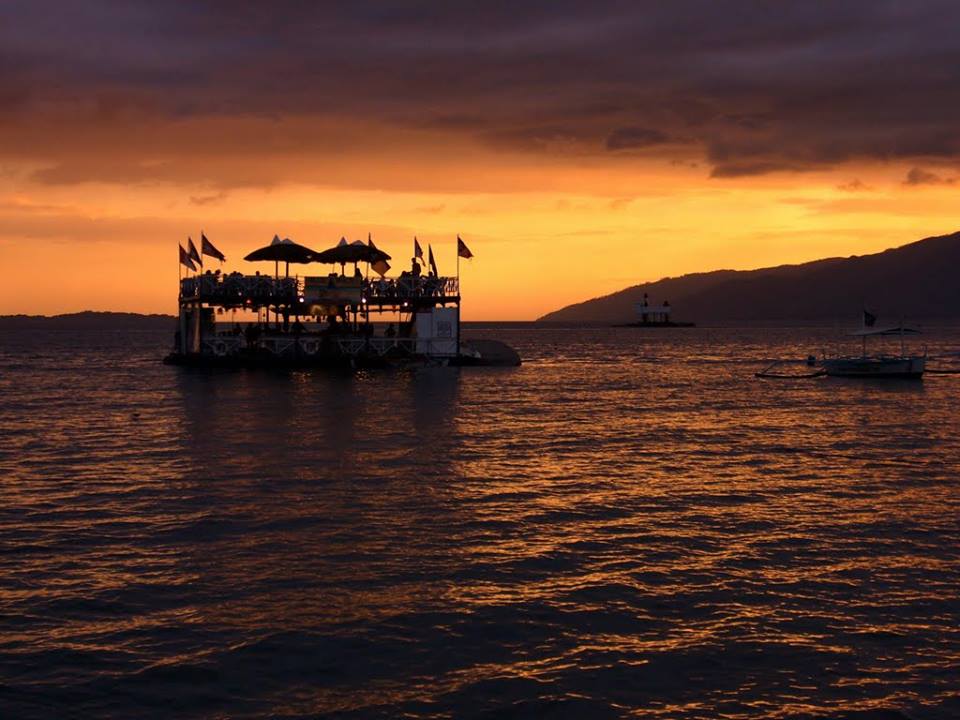 Now it is freezing outside the temperature has plummeted to the high 70’s or the low 80’s and swimming is put on hold until February when winter ends. Except for those silly Kano’s now frolicking on the shores of Subic Bay. Oh the floating bars are back out at the moorings and the SMB’s are flowing. 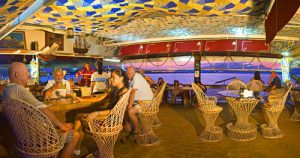 Growing up in New England, after a real winter, if the temperature hit the high 40’s we were in t-shirts and shorts. But not quite the beach yet!

But it is cool weather here now, less A/C required, the outside restaurants are doing a booming if not brisk business. (Did you see how I snuck that brisk in?) Come in the water, the weather is Fine.

I do not miss those below zero winter days even a little bit.

Mike;
When I joined the Navy from Boston, I made a deal with them, that I would take any duty assignment that no one else wanted as long as it was warm. The Navy forgot that deal and awarded me the “Order of the Blue Nose” foe two cruises into the Arctic Circle in the winter. albeit Bergen Norway was worth it.But after that they lived up to the deal.

Is that a Rum &Coke (pepsi) in your hand at Texas Joe’s? Record cold hit the northern eastern parts of the USA. Global warming is here to stay according to the Gory one.

Loren;
Without the rum! Record cold hits, and yet the brain trust called Obama still calls it Global Warming? Then I remembered that Paris and the United Nations was involved.

Good to see my favorite author looking well and smiling! God bless, sir. And thanks for another fun post 🙂

Phil;
The smile is back because my humor is back; life is once more like a Monty Python Movie! (lol)

Good to see my favorite author looking well and smiling! God bless, sir. And thanks for another fun post 🙂

Mr. Paul T. I don’t know what’s in that glass but it is nice to you with that “happy hour face” looking cheerful and healthy. 🙂

I was hoping you’d say Don Q and Coke. 🙂

Jose;
Don Q (RED) if I survived that I can survive anything! (LOL)

Jun;
When I can’t find Tanduay 12 year old, I will drink Captain Morgan

Paul,
Called my dad this morning. They were getting heavy snow in Ohio with 8 inches already on the ground with much more to come. My oldest brother was out there trying to put up the Christmas lights after he had cleared the driveway with the snow blower. After he put the lights up he had to clear the driveway again. He is supposed to be coming to the Philippines in April. He sure wishes it was 4 months earlier lol. Glad to see that you are getting back to normal.

Papa Duck;
Freezing in North America, and the UN is collecting tax money on Global warming? Had he come now you would have to add another room on the house?

My first few visits to the Philippines were during the December(ish) cool season. Pretty sure the Goodewyfe planned it that way. Being from the hot, humid Southeastern US, I couldn’t figure out why so many Kanos complained about the heat.

Of course, after I read a bit, I understood how I’d only dabbled my toe in the waters. I’ve since made it a point to visit during the heavy rains and the hot, dry season.

Pete;
It’s funny how that happens, and knowledge is withheld, but with me living in Florida, Puerto Rico, and Diego Garcia. Plus visiting most of the world at all times of the year (I’ll freely admit I’ve never been to Antarctica, and have nothing good to say about the Arctic Circle Pacific and Atlantic side) I learned that only San Diego has the perfect weather, the UN has made it exempt from Global warming or cooling or whatever its name is this week. When I arrived here the weather just was and the SMB’s were always frosty cold!