Is LRT coming to Davao soon?

It’s been a big talk here that Davao will soon have light rail transportation. Not sure if it’s really true though. I’ve heard of people saying that it will happen soon, some also said it might not happen in the near future. Honestly looking at the traffic situation here in Davao, I say that LRT is really badly needed here. The only problem, I think the people that sit in Malacanang has to approve it. Would he approve it, I think projects in Manila he will definitely approve it in a heart beat. Manila or the Luzon area gets high priority compared to here in the South. 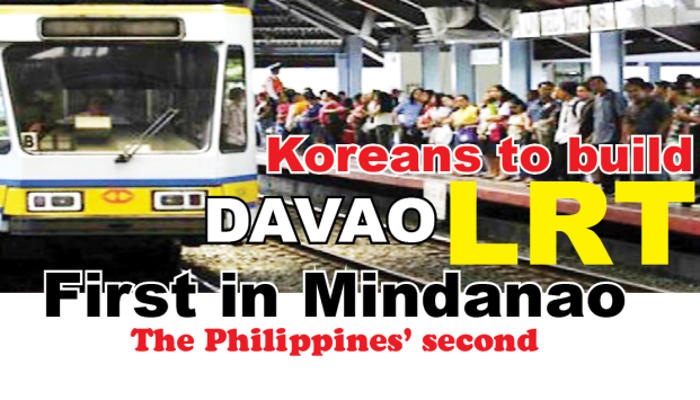 Anyway, having an LRT route from Toril to Tagum will be greatly appreciated by the commuters here in Davao. So many people from those areas work here in the city and the downtown area. When it’s between 7:30 to 9 am traffic is really hideous anywhere here in the city. So if they will have that LRT route that will really ease up the traffic in the city and downtown area. Of course when they will build the train route it will definitely be a traffic nightmare, there will be heavy traffic anywhere, but I think people of Davao will put up with it since the outcome will help out the traffic problems here. Hopefully if they ever build that the government will have some plans how to divert all the heavy traffic area. Feeling sorry for the students and the office workers though.

When we first came to Davao to live many years ago, there was not much traffic anywhere in the city. If you wanted to go from one place to the other, it’s so easy and quick. Even during the office hours traffic was still light back then. Nowadays, if you ever go from one place to the other you have to really get out of your house much earlier, you have to think of the traffic ahead. The day before yesterday, we went to the airport to pick up AJ. He’s schedule for arrival was around 5:50 am. We were thinking of going to the airport around 4:45 am anticipating of a little traffic along the way. So we head off to the airport at the time we said we would. Surprisingly on the route that we went to no traffic at all. Bob made a comment that “wow hon it’s just like the way it used to be many years ago, NO traffic”. As I was sitting in the back of the taxi, I was thinking the same a long those line. LOL. Those days are over already.

To the Davaoeno readers here: Do you think the LRT will ever go through? I’ve heard it will be funded by the Koreans? I’ve been researching and still no definite answers from our local government. So really I will believed until the project starts. :-). Are you in favor of the said project? If you’re not, why? I’ve seen that the route they are thinking just from Toril to Sasa area. Is it true? Do you think it should be up to Tagum? Let me know what you think guys.

I have visited Davao many times, my last visit being earlier this year. The city seems to be progressing with new malls, hotels etc. I am told the mayor runs the city with an ‘Iron Fist” which can only be good for the locals and visitors. Not so good for the criminals!
Gold Coast city in Australia has recently established a light rail which was designed to divert traffic congestion away from the central city. So far so good!

Hi Jack – Yep too many buildings being built right now. For sure criminals has to get out of here as fast as they can. They are not welcome here. Lol.

*** Gold Coast city in Australia has recently established a light rail which was designed to divert traffic congestion away from the central city. So far so good! *** — Happy for you there. That’s supposed to be the purpose of the LRT here to ease the traffic. We’re all hoping for it though. Crossing our fingers… 🙂

Thank you for stopping by. Have a great day!

Whenever they start the rail system it should have been started 10 years earlier. If they build it how many years will it take before it is finished. Five? Ten? More than ten? Of course it all depends on how long the system will be, right?

Hi Rusty – I’ve heard of this rail transit for a long time now. I’m just hoping it would push through. Not sure really when would they ever start the building. No word from the local government yet of when. 🙂

Thanks for sharing your thoughts here.

Have a pleasant day!

The key question is who will fund the LRT? The Korean company will build it, but not for free. PPP or some other funds needs to be made available. As you said, Manila comes first and they still are squabbling over what to do with our MRT.

Hi Don – I heard through the grapevine it will be finance by the Korean company. Who knows it could change. 🙂

Will see what happens. People in Davao are hopeful though for the LRT. Just waiting and crossing fingers. Lol.

Good to see you here. Have a wonderful day!