There is nothing shocking about that statement, as she usually is, and I’m not saying that to garner Pogi Points. But over the years I’ve been wise enough pay attention to her. Remember the TV commercials for E.F Hutton Investment Firm: When they speak everyone listens…

A while back she had the trees trimmed (Read removed) in the neighbors yard, When the Typhoon hit on the 16th of July the other two trees on the far side came down and crushed the Sari-sari store. But have no fear the folks who ran it took off the week prior to the “PHOON” as the 5-6 guy is looking for them. His little motorcycle is patrolling the purok searching everywhere. (I know where they are.)

I have given up on repeating the names of typhoons in the Philippines and started using the date it hit lans since no two news media outlets refer to it by the same name why should I even try. This one was named Ram-a-lam-a-dong or Glenda or whatever the hell they want to call it. (The July 16th typhoon works for me) 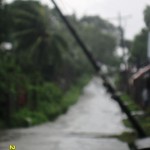 A downed power pole by my house 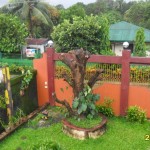 My mango tree 3 hours after the storm 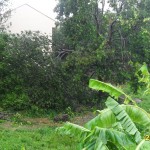 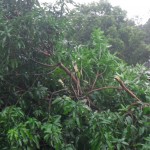 My mango tree 1 hour after the storm 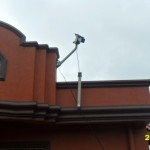 I sure do miss that dish

In my purok there were roof tires and corrugated metal panels gone airborne, trees falling and power poles coming down. Plus we just found one of my two my satellite dishes went missing, the guy up the street was trying to sell it to the junkman (Or miner of precious metals) He (The junkman) brought it back to me but I said it’s trashed so let the guy have it, he needs the money more than I do.

My dwarf mango tree lost a lot of limbs and has been trimmed again. The reason it a dwarf tree is because Mayang has it trimmed after every storm, soon it will be a bonsai tree in my living room.

My incinerator lost its “Charlie Nobel” (A sailor term for a small smoke stack) I’m glad we found that right away as it’s made of stainless steel and wasn’t cheap to have made. Yes I have a metal “GUY” to fix that.

Twenty minutes after the “All Clear” notice went out; Mayang had seven members of our family cleaning debris from the top of the house to the front and back yard. Within three hours you couldn’t tell a typhoon had even hit, except for one empty satellite frame upon the roof. (We have a “Guy” for that too.) 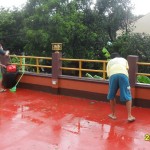 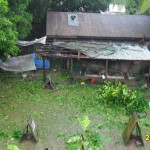 Roosters were found in the trees 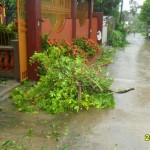 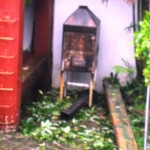 We’ve been “5” days without electrify but my rebuilt Honda has been humming along keeping the two ref’s and the freezer cold. No A/C but since the sun is behind the low pressure clouds it’s not been needed and solar power would be quite useless. I remember that someone mentioned that they had no need for a generator and could tough it out, well maybe for a few hours but try it for (5 plus) days.

Many roofs around me were damaged and some are simply not there, I’ll assume the tires and sandbags on the roof failed. But once more the slab roof held firm, I hate to keep bring that up, but the damn thing works. Albeit I did have to remove a lot of missile hazards that had collected there such as two roof tires that we removed and put out by my gate so the owner could collect them.

So that was the extent of my typhoon on 16 July in my neck of the woods, I hope that all in the path fared as well, Manila went under water again, and my heart goes out to them once more as that is an ongoing tragedy that could be cured by proper use of trash removal instead of filling the streets and run off drains with rubbish.

Always love reading your post as i am theer about 4 months out of the year. For sure you did the right thing with the concrete roof!!!

Roger;
My contractor and I argued everyday about the slab roof; he explained how much, money and time I was wasting? But being the thick head I am I asked if I was ever late paying him, or was it his money I was spending?
When we were done he came to me and admitted it was a good idea and he would recommend it to others.
Old dog, new tricks.

Paul learned a lot observing and listening living in the Philippines, not sure about being “pogi”

Edgardo;
In my life I’ve learned many things, Pogi Points I can earn, whether I’m pogi or not (“NOT” being the operative word) (lol)

Glad all is well after the typhoon” visited” you, Paul.

More and more, concrete construction does sound as though its the way to go there, this coming from a guy that has never had to face much of a hurricane here in the states.

As much as I do hate to sometimes say it, wife’s are pretty smart, about knowing what to do ahead of time, to prevent what could become a potentially bad problem, like trimming or removing trees for instance.

Bill S;
I’ve reach the point in my life when I take what she says as Hoyle, I’ve seen her do things today, that didn’t make sense until a few days later. That is why I keep my mouth shut now.

I have a lot outside Olongapo (up in the mountain in New Cabalan) that I plan to build a 4-unit apartment to rent out. It definitely will have a concrete slab roof on it. 😀

August;
Just be careful someone doesn’t build a Nipa hut up there and start living there for free. (LOL)
I’m right up the hill from there; give a shout when you’re in town.

I must agree in your first statement: Your asawa is right! I have learned the same lesson, even my stubbornness have been a little hindrance sometimes. My asawa is very – very often right. We had the pleasure of the typhoone of 16.july here too – or Glenda. It didn’t hit as hard as i can see on your good photos, here it took out 2 Malungay trees, that’s it. Our house is solid build, so no problem there. Sure it made a lot of mess around the area, but it’s cleaned up faster than the typhoon moves, Quote: ”… Read more »

Axel;
Hey Neighbor I’m happy to hear you also were not hit to bad, I was worried about your area as there is so much flat ground over there. That slab roof is also a great place to sit with friends and enjoy a cold one the rest of the year.

Good Job Senior Chief! As You Know , I had been toughing out the power outages prior to Visiting your area at the end of Feb this year. That changed when I returned to find that power was lost all over Mindanao and was not restored in my area for over 48 hrs. All perishable in my freezer and refrigerator was lost and prompted me to go shopping for a generator. I knew that a 5KVA gen would not do what I needed it to do and that Gasoline generators eat mega bucks in fuel compared to diesel so I… Read more »

Joe;
You could sell power to the purok at that size, 24,000 kilowatts of power. (One thousand kilowatts of power per each horsepower output). I’ll agree that diesel is the way to go, but in 1999 I was lucky to find a good brand of generator, (HONDA) and all they had were gas, my buddy has a diesel and loves it. So a good move on your part.
But now your problem is solved, have a cold beer.

The gazebo I designed out back didn’t have one scratch

Rick;
It is good to hear that your damage was minimal, all you can do is feel sorry for those hit the hardest. Here’s something I’ve noticed over the years. The power was off for a few days, but next month the light bill will be the same. How do they do that? Saturday afternoon, the truck with the new poles shows up, 3 hours later we had power.

Paul, Like Rick above we also got a direct hit from Glenda. It was so strong that I thought the roof would disappear. Surprised there was no damage to the house except a few lamp covers from the fence blew off which we retrieved afterwards. What surprised me most is the Cignal Dish still being there. But we still don’t have any service until sometime later this week. Several trees as expected were down. Not a lot of damage to the houses. One powerline pole came down bringing down 7 more poles with it. Surprisingly they had new poles up… Read more »

Randy; PapaDuck)
One dish came down and the other survived, so there is no predicting the outcome of any typhoon. All one can do is prepare the best one can and buy that generator, (You know you want one) (LOL) I’m glad you and Anne faired so well, stay safe.

Good to read that you and the other comenters here survived as good as you have described. If the Honda Generator kept you going for the 5 day power outage, there’s the proof of a quality repair by the generator “Guy”. With so many brownouts and in this case a 5 day or more power out for some, I wonder if anyone there has given any thought to getting a “Servel” or equivalent ? Whats a “Servel” ? A refridgerator that operates by propane instead of electricity. They are still made and when I looked into it a while back… Read more »

Bob NY;
I asked Mayang if she had ever heard of a Servel ref, and I explained it to her, she said that propane is so expensive the generator is cheaper to run. Plus the generator gives you lights and TV also. “Man can’t live on BEER alone!” (LOL)