Last week Bob and I went to GenSan. That was our travel again there for many months. While leaving Davao I’ve noticed already that there are  so many buildings being built in the city. Some were convenience stores, mini grocery stores, apartments, subdivisions and condominiums. It really amazed me at how many condominiums now being built here in the city. Five to 7 years ago it’s hard to find any condo unit here in Davao, but now you can just see condo buildings sprawling all over town. We also have many good buses now too that have wifi and bathroom.

Yellow Bus Execuitve Class has Restrooms and WiFi on board

On our way there the roads are being repaired and I think they’re widening the road too. I’m not sure because of politics that’s why the roads are being rebuilt. Hey, it’s almost election time here. But no matter what’s the reason behind it, it was really nice seeing that the road were getting fixed (in-town and out of town). As we approached GenSan I can also see many good improvements there. Way better than when we used to lived there. Well, that was 14 years ago already. Too many things happened then. They have many malls and good hotels now there too. I’ve seen they also have condominiums that are built already and some were being built. It was really nice seeing my home place keeping up with the rest of the country. GenSan used to be a small city. Now with the improvements I’m happy to say it’s one of the good city here in the Philippines.

I know also that Cagayan De Oro is improving ever since my visit there. I know they have nice subdivision, good malls and hotels there too. I’ve heard from a friend that they have many condominiums units there too. Cagayan is also trying to keep up with the big city improvements of the Philippines. It used to be Manila is the only place that you can see condo, Cebu followed later. Nowadays, Mindanao just catching up.

Surigao Del Sur/Del Norte are also improving too. Too many small city in Mindanao are improving. Many of the mall owners now open at those small towns. Like when Bob had the gig last year we visited those malls in the small towns it was really nice watching too many people went there and shop. Some might just be cooling off, but I’ve seen people buying too. 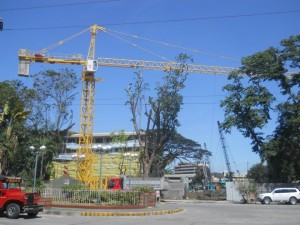 Lots of Construction in Davao

I’m just talking about the whole Mindanao in general. Really Mindanao really improved a lot over the past 15 years. Bob and I used to travel all over Mindanao. So happy to see that almost in every small town now so many improvement coming. Like convenient stores are now there and malls are building there or was already built there. It’s just nice seeing that Mindanao is going strong even though the news or the people from the North said to not step foot here because it’s a dangerous place. Honestly they don’t know a thing a bout the place and talk bad about it. It’s really annoying.

As you can see food that being sold all over the country most of it came from Mindanao. Honestly, we almost have everything in here in our island. Talking about fruits we have here (Davao & Kidapawan & other place in Mindanao), talking about fish we have here (GenSan), pineapple (Polomolok, Bukidnon & Cagayan). Talking about meat we have here. We also have rice & corn growing in so many areas here in Mindanao. We have coconuts almost all over Mindanao, some parts of Mindanao grows palm trees. Vegetables Davao & General Santos/ Polomolok area.

Proud to be Mindanaoan!

Nice observations, feyma. As for the road widening works going on, it takes an average of 3 years from the planning, bidding of contractors and the construction to do such a big project. But the road widening all over Mindanao started years ago. But i guess people can’t help to think about coming elections and this kind public works…

Hi Gerardo – I’m just happy that they tried fixing the roads around Mindanao. It’s good for the people of Mindanao. Thanks for your comment!

Hi Feyma- We still travel around Mindanao, very recently to Davao and Gen San. We also notice the tremendous construction work going on in cities and towns that we visit. Davao for example has changed beyond all recognition in the last 10 years more so in the last 5 years with new Malls and Condo’s and high rise buildings of all descriptions not to mention the empty lots now being built on in some of the more lucrative Sub-divisions. Even the main highway on Samal Island is being currently reconstructed to a high standard although the opposite side from the… Read more »

Yeah, especially with the abductions of the 3 foreigners and Filipina there on Samal island last month. Please take heed.

Hi Willie- Yes unfortunately these things do happen although not in the area mentioned which came as a complete surprise I can imagine to all who live there.
Regards.
Jim.

Hi Jim – I know what you mean. We’ve been traveling around Mindanao when we first arrived here. I remember going to Cagayan De Oro at that time, roads were really so bumpy, too many pot holes. Just a few areas were paved at that time. But we still enjoyed going there and Iligan. Going to GenSan at that time was more enjoyable for us. At that time going around GenSan and the Sarangani bay was a great drive. In the mid 1990’s the GenSan area starts to boomed and the road was the first thing the built. Yes, their’s… Read more »

Hi Feyma
The bus in the photo is a great improvement on the ones we travelled on between Davao and GenSan 7 years ago. Something to look forward to next time we visit.
Marjorie

Hi Marjorie – Yes, that’s one of the bus now that’s going the route of Davao to GenSan and vice versa. Some are one stop to Digos and others just don’t stop all the way. You’re right something for you to look forward to on your next travel.

Always good to see you here Marjorie. Have a wonderful day!

10 years this year since I visited Davao. I don’t recollect any cranes or really major building sites back then so things have certainly changed!

Definitely a big change AussieLee. You’ll be surprise on your next visit.

Hi Feyma, I can say Gensan has changed a lot. I remember when me and my asawa got married almost 9 years ago there was not much in Gensan. There was 2 malls KCC and Gaisano. KCC was the nicer of the two. I was unable to come back to Gensan for about 5 years till 2013. And I can tell you Gensan grew so much. They have a SM City Mall now and it is really nice. The KCC was expanding and remodeling too. And not to mention all the Hotels, houses and other businesses being built. I am… Read more »

Hi Scott – For sure, really big changed. KCC has other fancy mall too “The Veranza Mall. Very nice. GenSan really did change a lot ever since living here. I’m so happy for the improvements though.

Glad to see another expat coming. Hope you will stay in GenSan for the long haul.

Have a great day!

Hi Feyma Things certainly are changing and it is the reason we are going to stay in the area. I am worried about the port development though in Sasa. The port is to be upgraded with faster offloading crane systems but where is the traffic going to? The road past Sasa wharf is already congested enough without more traffic adding to the problem. Obviously someone has thought about these things. The proposed bridge to Samal would be a relief as well and will save the queueing at the ferry terminal on the busy days like Sundays and public holidays. The… Read more »

Hi AJ – I can see your point. That area there that you’ve mentioned been congested for a long time now. Hopefully the local government can do something about it soon. Traffic is getting so hideous here now. Hopefully the bridge to Samal will push through soon too. Airport in Samal will be a good project too. Hoping they will think of that.

Thank you so much for stopping by and leave comment. Always good to see you here. Have a great day!

Normally I’d say be careful what you wish for. However, you have a very different mayor.

I know Duterte will keep a handle on the growth situation. Usually, almost always, with growth comes crime. Your mayor will hammer the criminals.

We, Tagbillaran, has growth also. One can only hope the mayor here is able to control those criminals that come with growth.

For roads, this is national government projects. Thanks Pinoy for managing our taxes well

Hi Nelia – I am thanking the local government too for pushing the projects. Nice to see you here. Thanks for the comment!

Thanks for your good observations Feyma. I look forward to visiting Mindanao early next year when am home for good to visit places, friends and relatives who’ve relocated there many years ago. Sure Mindanao is the “Promised Land”. Blame the media for the bad publicity in the past.

Hi Lou – Thank you. Have fun on your visit. Enjoy going around the country.

*** Blame the media for the bad publicity in the past. *** — I know, they really know how to make the place looks bad. Oh well, we like it here and love living here. Too bad for them. Lol.

Have a good one Lou. Take care!