T’was the night before the Pacman’s Pay-per View fight my wife and daughter had just spent two days re-purposing my granddaughter’s electric powered toy ATV. It has been sitting in the spare room for over ten years because as a little girl she didn’t really like it that much. But now that the Lil Dude is two years 6 months he has rediscovered it and claimed it as his own. A phone call to Heather Coleen and she agreed with Jaden, not even remembering she owned it.

They found this stick-on paper that changed the color from girly lavender to manly blue and silver. As if the kid really cared. Next his mother bought a safety helmet and elbow and knee proctors. Mind you this toy travels at breakneck speeds just under 2 MPH and sits 8 inches off the ground. But the Lil Dude doesn’t seem to mind so why should I? 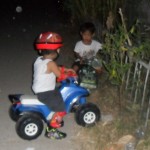 He ran him off the road 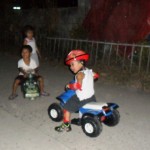 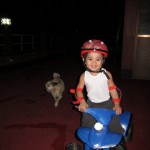 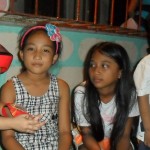 And I was going so fast… 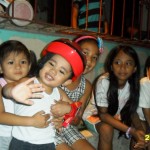 Hanging with the ate’s 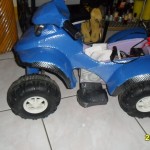 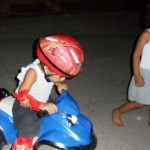 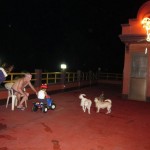 First time on the roof

Remember we were brought up un the time of that idiot Dr. Benjamin Spock who changed how America raised children 50 years ago? That fact that his son committed suicide speaks volumes to me as to how wrong, that fool was. As a kid I rode down a busy Avenue in Boston sitting on the handle bars of my brother’s bike, and my younger brother on the back as my oldest brother peddled in and out of heavy traffic and the cars were made of steel with no plastic bumpers on them. And not a one of us had a helmet on. How did we survive?

As per the fight, need I say who won? But the 35 plus people in my living room were happy with the results. Not one beer was left in my beer Ref., 5 bottles of Emparaflu Lite (With Ice Tea Mix) went missing, copious amounts of chicken, pork and pancit was consumed. I keep the vegetable crisper in my beer ref stock with stateside candy; the kids emptied it within the first hour and were running around buzzed to the max on a sugar rush but they were happy little dudes and dudettes.

I know this article is out of order but lord November has been busy, so much going on around the homestead and our purok (Neighborhood). Mayang has a Doctor’s appointment, the New, New Mitsubishi G-4 finally made it to 5,000 kilometers and must go to the Car World dealership to be poked and prodded as per the warrantee requirements. February to November it took 9 months to reach this milestone or kilometerstone whichever is the right way to say it. I change my oil by time not mileage
So I guess it will be a while before I get in for my ten thousand kilometer check up.

So that sums up November and part of December, I was pondering the adventures that lay in wait for me in 2015, or what other electric motor I own will need to be rebuilt next year. It’s a wait and see, as to what game that we all must play here next year, albeit most times they are fun.

Okay I have rambled on long enough with Hodge podge of an article; I think I’ll head to the man cave with a USB full of country music, a bottle of Tanduay Superior rum, and hold court with 9 of my 14 dogs, they’ll have to get their own drink as I’m not sharing, because this ain’t Face Book.

Paul,
Boy, the Lil Dude is really growing up. I can remember when he was just a baby. We did the same thing when we were kids. Passed on toys to the next one. My parents couldn’t afford to buy new ones all the time. But we didn’t care, we were just happy to have them.

Randy;
I grew up the middle son of five boys, the first one awake was the best dressed. The same with our toys we tended to share and it seemed like we had a lot more.

Paul, are you serious about having 14 dogs???

John Power; Now there are only 14, because a few passed on after a long happy life. Friends would give me a puppy and after 40 plus years at sea where I couldn’t have on I never said no. The eldest is 15 years old. I have the room for them and they are well cared for. There were two German Sheppard’s that live with me, after living in a tiny apartment in Olongapo City, they were going back to the owner after he found a larger place. He never did. I never cared as I fell in love with… Read more »

Obviously not like, I think it was Scott, who has just moved here! He wants NO goats, cats, or dogs in his place, which is also very big! We have two dogs(askals), and I don’t know how many cats! We just seemed to inherit them! But I would love a German Shepherd again!

With Lil Dude racing around on the top of Vila de Paul you might need to consider getting him a parachute to go with his helmet & knee pads. Hows the store inventory of the Tanduay Superior Rum holding up?

Loren;
After the calamity of two months with no Superior Rum, Tommy and me each bought a case and hid it, now we still buy it from the store as we need it, and the two cases remain as emergency stock for the next time. As for Lil Dude, the mother follows behind him to insure he is not in any danger. It’s her first born, wait until her next child.

I was with you until you mentioned country music. Arghh!

RT:
Country and Old Rock & Roll, Like you’ve never been to a Shit-Kickin Bar when you were in the Corp.

Dr. Spock and his dang “Time Outs”. My Dad preferred his trusty old Razor Strap on my backside. I drank water from a hose and lived, I was going to a parade on my bike when the handle bars broke off at the neck, I threw the handle bars on my lawn and steered with the neck only. . . and no helmet. That was a different time. We took off our hats and respected the flag, we said the Pledge of Allegiance at school. We respected the Police, the Clergy, the Teachers, and our elders. People gave a damn!… Read more »

Terry;
The kids here seem to enjoy themselves more and spend more time out doors.

Another good one, Paul. You and little Dude and all the rest of the clan have a safe Christmas holiday.
–Rich–

Richard;
The same to you and yours

Ah yes. Kids love their wheels! But how come the other dogs don’t get to come into the man cave? Can’t handle their likker?

Pete;
Front yard dogs, backyard dogs and three house dogs, they seem to get along better that way and less extra puppies. But kids do love anything with wheels.

Another great article. It’s great living vicariously through you!
The helmet, knee and elbow pads for the Li’l Dude remind me of my poor granddaughter. She gets the same treatment even though those little ATVs only go about 2 MPH…tops. Plus I don’t see how a kid can fall off of one of those things, unless they fall off on purpose.
Merry Christmas to you and yours!

Bill Mac;
Lil Dude does stand up when he rides most of the time, but that’s just to drive his mother nits.

Well, I guess standing up would make it possible to fall off. Especially when he lets go of the “accelerator” button and it does that sudden stop.

Bill Mac;
At 2.5 years old any boy will find a way, my daughter will figure out that bangs and bungs and scrapes are a normal part of life for kids.

Fourteen dogs? Are you sure there are not 13 dogs and one white goat? That picture on the roof with you sitting in the chair — that animal look like a goat to me! –Rich–

Richard;
I won’t argue that but then it’s 14 dogs and the goat, but I do cut the grasses.