RIP to a Philippine Lover

Well, Anthony Bourdain was not my brother, but in some ways, he had a kinship with most anybody who would read this site.

You see, Chef Anthony Bourdain had a real affection for the Philippines. I can’t really say for sure how long his Philippine connection went back, I think that it started about 10 years ago. There was an anonymous food blogger in the Philippines who was known as Marketman, and he blogged on a website called MarketManila. It is now known that Marketman’s real name is Joel Binamira, a Cebuano who spends part of his time in Manila. I will get more into this later in the article.

As many readers will know, Anthony killed himself over the weekend. I found it really sad when I heard about this. I really liked him a lot. In these days when so many people hate each other over things like politics, I was found Bourdain to be very entertaining, and very real. I think he might’ve been a kind of liberal guy, and I am pretty conservative, but he didn’t seem like the kind of guy that you really needed to fight over politics with. He was the kind of guy you could just talk with about food, and other real-life things. I always found him entertaining. I was really shocked when I read about his suicide. The guy seemed to be experiencing such success, it just doesn’t seem that a person like that would resort to suicide. But, we can never know what demons are haunting people. Lately, here on the blog, we have a fair amount of discussion about mental health and related issues, mostly coming from Jason, and I have enjoyed our discussion, I also think it is valuable. I feel that there are many ex-pats who experience mental health issues. Some of them probably decide to move abroad seeking to leave such issues behind them although that rarely works out. 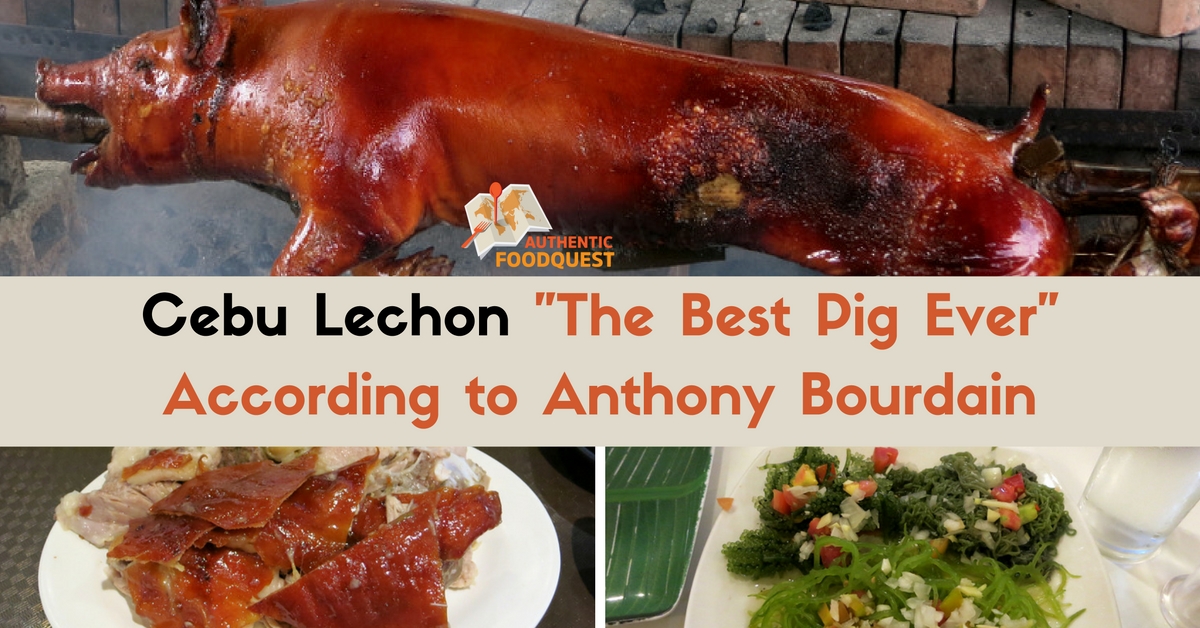 Anthony says that Cebu Lechon Baboy is the “best pork ever”!

Over the years, Anthony Bourdain made two visits to the Philippines that I am aware of, perhaps he made more. As far as I am aware his first visit was about a decade ago and that visit was related to Marketman. He made a second visit several years later seemed to be mainly focused on the Manila area. In his second visit you could really see that he had developed a very special love of the Philippines and the Filipino people, it just really shined through. He told some very touching stories about some Filipinos that he met his journeys.

But the story that I enjoyed most was his first visit to the Philippines. Bourdain was a chef by trade, and especially on his early TV shows his show was really centered around food.

Before he made that first trip to the Philippines, somebody on his staff started reading the MarketManila blog and took particular interest in a series of articles about Lechon Baboy (pig roasted over an open fire, Philippine style). MarketMan had written an extensive series on this topic, and he advocated making lechon in a traditional way, not using the modern methods, which he considered to be inferior. Bourdain was a real lover of pork, and somehow word of these articles got to him. His staff started researching it and ended up setting up things with MarketMan for a visit to Manila and Cebu. That became an episode of his show, No Reservations. MarketMan was featured on the show, for most of the show in fact. He cooked several Lechon Baboys to feed Anthony Bourdain, and it was really an enjoyable show. Apparently, this particular episode of No Reservations was viewed by over 100 million people worldwide, and it really puts Filipino cuisine on the map, thanks to chef Bourdain. Read more about this episode and how it all came about by clicking here. This is a great article written by MarketMan himself.

As I said, I really enjoyed following Anthony Bourdain, watching his journeys to different parts of the world, and watching him cook, and mostly eat different foods from many different cultures around the world. I will certainly miss Bourdain, but I will always remember particularly his visits to the Philippines.

Morning Bob, it came as a shock to me after hearing the news, he had a great way of presenting , so laid back.
He will be missed by many, but he never seemed to be the type to kill himself, and as I understand was not long ago remarried.

Good morning, John. Haven’t heard from you in a while, hope you are doing well.

It was a shock to me as well. I did not hear about him getting married in the recent past. Very sad.

Keeping well Bob thank you. Did not know you were playing santa at NCCC Tagum until after the event, im still waiting for my Toyota suv I asked for lol lol.
Busy doing running repairs on the house as its 10 years old now, time and weather taking its toll.

Indeed, John, I did a lot of work for NCCC for the past 5 years or so, including Tagum. In fact, I was to work at NCCC Mall Davao on the day that it burned down, but it caught on fire before it was time for me to be there. Very sad.

For those of you who wish to catch the episodes…………

Hi AJ, good thought to share those links, thank you.

Anthony Bourdain was also a gifted author. If you enjoyed seeing him on the screen, you might also enjoy his books. His wit and humor also shine in text form!

Yes, indeed. Although his later years were more toward TV, he did indeed pen many a story.

I sat in for one of our talk hosts on Friday and discussed Bourdain’s affection for the Philippines. Seems he had a Filipina nanny for his daughter.

Interesting, I did not know that.

Yes, Anthony Bourdain will be missed. Really enjoyed the humor he injected into each episode. He was not married, but had an Italian G/F. Yes, he was a liberal, but never really talked politics much in his shows. They had a guest on Fox who attempted suicide by jumping off the Golden Gate Bridge, but survived. He said the minute he jumped he regretted it. He said most of the people who survived suicide attempts regretted doing it right after they attempted it.

Yes, he had a real dry sense of humor. LOL