The Orange Taxi in Davao!

Yesterday my son Jared and I went to Gaisano mall. I had to do some errand for our other business since during the holidays the courier here were closed. Plus Bob and I had been out of town too for his Santa gig. I told Jean that we will met her at G-mall. At G-mall we bought some of the stuff that’s needed for our business. We buy stuff there if SM and NCCC were out. Really our first choice to buy our stuff now would be NCCC and SM. The other mall were just secondary since SM and NCCC really paid Santa Bob good money for his gig there at their mall. 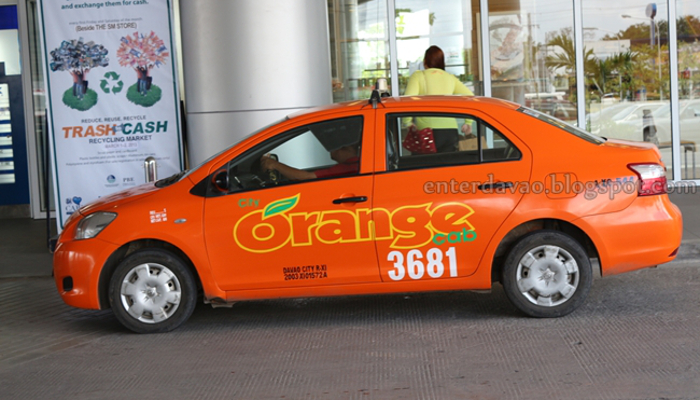 Anyway, after buying our stuff at G-mall Jared, myself and Jean rode a taxi to come home. We told the taxi that we will be going to Matina and Jean will be drop off at the Bankerohan. So when we get to Bankerohan Jean was off, it took her maybe less than 30 seconds. She just open the front door of the taxi and she’s off. Then the taxi said that he had to start (flag down again) since we drop off Jean. I told him, “really”? I said: “If you’ve waited even for 3 minutes I understand that you’re starting to flag down. She just got off within seconds of stopping and then we will be going and you’re going to start the flag down again?” He said: “Because I stopped to let her out so I will start the flag down again”. I told him: “Just stop your taxi and we’re going out”. I paid him the exact amount, I didn’t give him any tip. I’ve had before a taxi waiting for me while I was at the atm. He didn’t flag down, but it’s charging me while I was inside. I gave the taxi driver big tip. I’ve seen people here do the same the had the taxi waiting at the atm, convenient store and many others.

Since we got off the taxi we waited for Jean on what she’s doing and we got another taxi. We tested our other taxi not an orange taxi of course. We got a white taxi. We told him to drop Jean at NCCC just at the outside stairs near the highway. The taxi driver said okay. And off we went to our house without flag down or other charges from the taxi driver. Of course he got a good tip from us.

During December time Bob and I always gives good tip on every taxi ride we ever rode. For example: Like during Santa’s gig: from our house to SM Lanang the taxi fare it cost us like P127, but we gave P200 to the taxi driver, we told him to keep the change. That’s just one way. Another example: From our house to NCCC or SM Ecoland & S & R, the fare usually comes to P40. Lot’s of time we give tip like 10 to 15 on top of the P40. If we encounter a very nice and courteous driver we will give P20 – P50 more. During December we will pay P100 lots of time.

Good thing I hardly ride the orange taxi. Luckily not too many of them driving around town. I definitely quit riding with them. So thankful of other taxis that’s driving around the city. I’m so happy too that we live near the SM mall, NCCC mall and S & R. We can even just go walking to go to any of those mall. So that I don’t have to deal with those orange taxi.

When I am in the Philippines my Girlfriend programs me to hold back on the tips, even though I want to give much larger. This programming, seems to take a few months to get rid of when I come back to the states. Money programming. The point being, even a quick taxi ride in New York costs at least 6 to 10 u.s. dollars, 300 to 500 php if Im correct? So when I get a tab in the Ph for 40 to 120 php, I want to give the driver 2 or 3 dollars tip, to treat him like… Read more »

Hi Marc – I can understand your Girlfriend. Really it’s easier to tip and just give when you’re on vacation. But if you live here for awhile you will know when to give tip and not. It’s still cheaper here than in the west, if you spend wisely here. Lol

A lot of taxi’s seem to be doing this in Davao now not just Orange. Some display the tariff inside the cab for1.2or 3+ drop offs. It’s usually the big companies that do it, best to use an independent.

Hi Keith – I hope that I will never experience that again here in Davao. Good thing we have too many taxis now in Davao.

thank you for stopping by. Happy New Year!

I bet the taxi driver forgot to tell you that there is a 10 peso surcharge in the fare indicated that you are supposed to deduct from what is displayed ??

Hi Ian – He told me the price on the meter. Of course I gave him the amount with the minus P10. I usually give the P10 tip during December, but with him I deducted it. I was so mad.

Thank you for dropping by!

Have a great New Year!

I never ever use a taxi unless I going to the airport where nothing else is allowed. I would much rather hire a trike for the day or deal with catching a jeep. It is a lot less expensive and we make the deal with the trike up front… not only that?.. but a good tip is 20-40 p.. never had a problem.. they will stay and look for you when you come out of the store.. carry your stuff and tie it on.. I have hired a tricycle for an entire day of going from one store to another… Read more »

Hi Ricardo – I hear you. We’ve been using trike in our neighborhood. Problem here the trike has a limited access to the city. Jeepneys and taxis are the main transportation in the main road here in the city. We ride jeepneys most of the time, but sometimes we need to ride the taxi too. Oh yeah, much cheaper to be riding trike than taxi. Yep, way too expensive to ride taxis in your part of the world.

Good to see you here. Have a Happy New Year!

Easy 2 see, great from a marketing stand point. No mistaking which cab to grab,

beware to orange taxi body number 1537…the driver is so rude…asking for an additional payment …..complaining about the distance from northcrest to tigatto that supposedly its a metered taxi,so no need for additional charge..

i understand that tigatto so kinda far from the city..i used to give additional payment to taxi drivers who does not demand of it.
so pls orange taxi management ..train your drivers nga dili magmukhang pera..kay ug taga davao ka…dili ka baga ug nawong..pakaulaw ra ka nga taga davao ka…