The Wonder of Toilet paper

As a sailor and traveling the world the thought of toilet paper was something that just never occurred to me! How could a young lad from Boston possibility imagine that outside of where I grew up (In New England, you know that Super Bowl-winning place) that something as basic as toilet paper could ever be an issue.

In the 1960’s Europe was still recovering from WW-II, wages were low and beer was cheap and toilet paper was scarce, and the quality was not very high. I can remember back then that “TP” was like waxed paper and not soft. I’ll assume the reason was to prevent people from using that much.

As the years passed and the world economy improved, over in Europe the “TP” situation improved rapidly. Albeit, we sailors were still smart enough, to carry our own”TP”, in our camera or overnight liberty bag. (Never push your luck)

Then came my first time to North Africa and the Middle East that had their own simple system of toilet paper or the lack thereof, just use your left hand full of sand as that seems to do the trick. Also, remember to never wave or eat with your left hand. Then I sailed to the rest of Africa (The Left and right coast) Plus the Caribbean and South America, which each had their own quality or lack of “TP”. 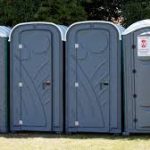 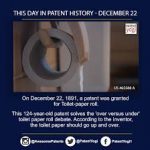 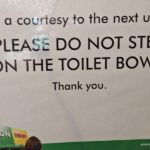 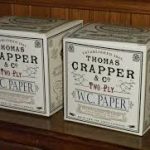 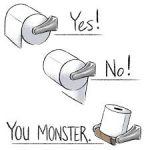 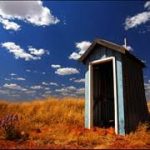 Hey not the best subject to write about, but it is part of life. In the Navy, some farm, boys told me about corn cobs but I always thought they were pulling my leg. I wondered what the potato farmers used.

Then I moved to Asia, my buddy Rich had 15 packages of Charmin TP stored on a shelf that was in his living room for the entire world to see and always kept it stocked. I never quite understood why as the Philippine stores were now well stocked with American and local brands of “TP” In a country where the tabo full of water seems to be the popular way here, now I have never asked how it is used, nor do I really care to know. That is a hint…”I Really Don’t Ever, Want to Know!” (LOL)

So I have found that Asia is different in many of the countries, along with the style of utensils used. 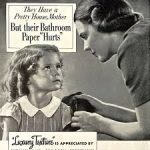 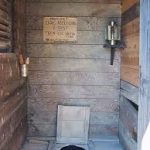 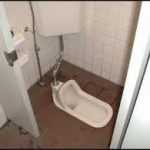 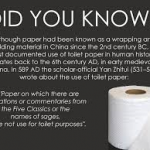 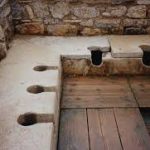 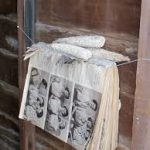 By The Way; is toilet paper fed over the top or from under the roll? The fact that this is even a discussion tells me you must take toilet paper for granted and you just assume it will always be there.

I admit that being from the West I am an assumer, and you might be too. In the last 25 years I’ve found a marked improvement in the cleanliness of most comfort rooms here, but now I find that I always have a package of baby wipes in my pocket anyway.

Kevin Kern;
Could the subject of “TP” be brought up without mentioning Mr. Whipple?

Paul Thompson For our generation Mr. Whipple and TP were inseparable 🙂

Before my first visit to The Philippines in April 2008, I had read about the lack or non existance of TP in public CR’s so I made sure I had a half roll in my carry on camera bag. At that time I had to transfer to the then ” Domestic Airport ” in Manila. As much as I dislike having to do a ” sit Down ” in a public restroom, WC or CR I felt I just could not wait til I got to my destination, Iligan City, Mindanao. I was sure happy I had that half roll… Read more »

Bob (NY)
My newest answer to the problem is the small pocket pack of Baby Wipes, I never leave home without it!

Same problem with knives and napkins here. Drives me crazy.

Alex;
Tiny napkins and thin, but you can only use one or two they are restricted. I can get knifes, but not a sharp one.

I spent 32 years in Thailand and they have a lovely hose and pistol at most uptown places. I have a big house with toilets upstairs and downstairs and have installed hoses in both. I hate having the only option as toilet paper. I have problems in my favorite hotel where we stay in Davao, Marco Polo, as they are “civilized”. Anyways, in my house toilet paper is for blowing your nose.

I’ve many ship stops in Thailand it was on my list to live. A shipmate had his girlfriend building a house there, he sent her money and she sent him pictures of the construction. But the British guy who was living there had no idea who the lady was that kept coming by to take pictures. We never let him forget that!

Those of us who have ever had a playful cat know which direction to hang the roll. :o)

Michael Johnson;
I have one 19 year old overweight cat that hasn’t been playful in the last decade, and 14 dogs who give it no attention. But I had never thought about that. (LOL)

gc165
After we said Amen, the priest would turn and say; “Go forth and sin no more.” That was too hard!

This topic brought back an old memeory of the diriest trick ever played that I saw. Ever since I saw this trick I always made sure that I had the toilet paper fitted with it fed over the top because years ago I was working on a large construction site and when I went to use the toilet paper some dirty rotton scum had smeared a turd on the under side of the roll and you pulled out a pre smeared length of toilet paper to use. Grrrr

Norman;
I could see why you would be angry, but picture the person sitting there doing that and what they’re fingers smelled like for the rest of the day.

Dennis Glass;
We share the same pet peeve, again my baby wipes are always with me!

But remember, never put those baby wipes that are so soft and gentle on the sphincter down the toilet…or you will be needing “plumber guy” since they don’t dissolve!

Jim Hannah;
I learned that about baby wipes by watching a dumb TV show called “Adam Ruins Everything” Especially on the plumbing, I must maintain with my own dime

I am a fifth time visitor to the Philippines. Our condo has “the hose” option. I like it and use it regularly. My obesity makes the TP option more complicated and inefficient. The hose is not w/o some extra manoeuvres! I actually wash in the shower right next to the toilet and, yes, I do it bottomless! The shower floor must be cleaned with the hose afterwards. The TP method has the requirement of putting soiled product in the waste basket. The sewer pipes are too small to take TP. I’ve seen this in Greece too.

Guyle Nunweiler: Something I learned in the tropics,by living many years in Florida, eleven years in Puerto Rico and the last twenty five years here in the Philippines I noticed it was hot here. So I take a few showers a day anyway and have for years, a habit I also had at work. (I was a merchant seaman) When building my house I also thought the drain pipes here in the “RP” were too small, so I enlarged them to three inch pipes. But right Condo’s lack that option. So after they removed my lower intestines two years ago,… Read more »

I agree with the showers to cool off. I lived in Barbados for three years. A shower in the morning before travelling to work is very helpful. I need A/C now while in the Philippines on holiday due my size.

Guyle Nunweiler;
I took showers morning noon and again before going out at night. March is the real scorcher here but the rainy season will be back in May.
Barbados was fun; I re-supplied the Embassy Staff with American products from Puerto Rico so I flew there a lot.

Oh ya, one more thing, I am a male, in case you were wondering … about “my plumbing”!

Guyle Nunweiler;
I wasn’t wondering at all, and had assumed you were.one or the other.

Ah yes, that waxy, tracing paper kind of TP, that brings back a memory from the darkest recesses. “IZAL Medicated” was the brand iirc. Wait….I’ll google that…

Yes, plenty of evidence here for the accuracy of my memory…but tissue it WAS NOT. Harsh and greaseproof paperish it certainly was. And I’m tempted to wonder, in what way was it “medicated”???

Jim Hannah;
Soaked in Preparation “H” is the best I can come up with? In Spain they handed me waxed paper, but I wondered where the sandwich was?

Toilet Paper is obsolete and just plain nasty​ and Wet Wipes are causing expensive clogs in the sewers and septic systems​. With modern plumbing we should all be washing not wiping and the best way to do that is with a Hand Bidet Sprayer. Far cleaner, healthier, saves money and you never run out. See http://www.bathroomsprayer.com​.​