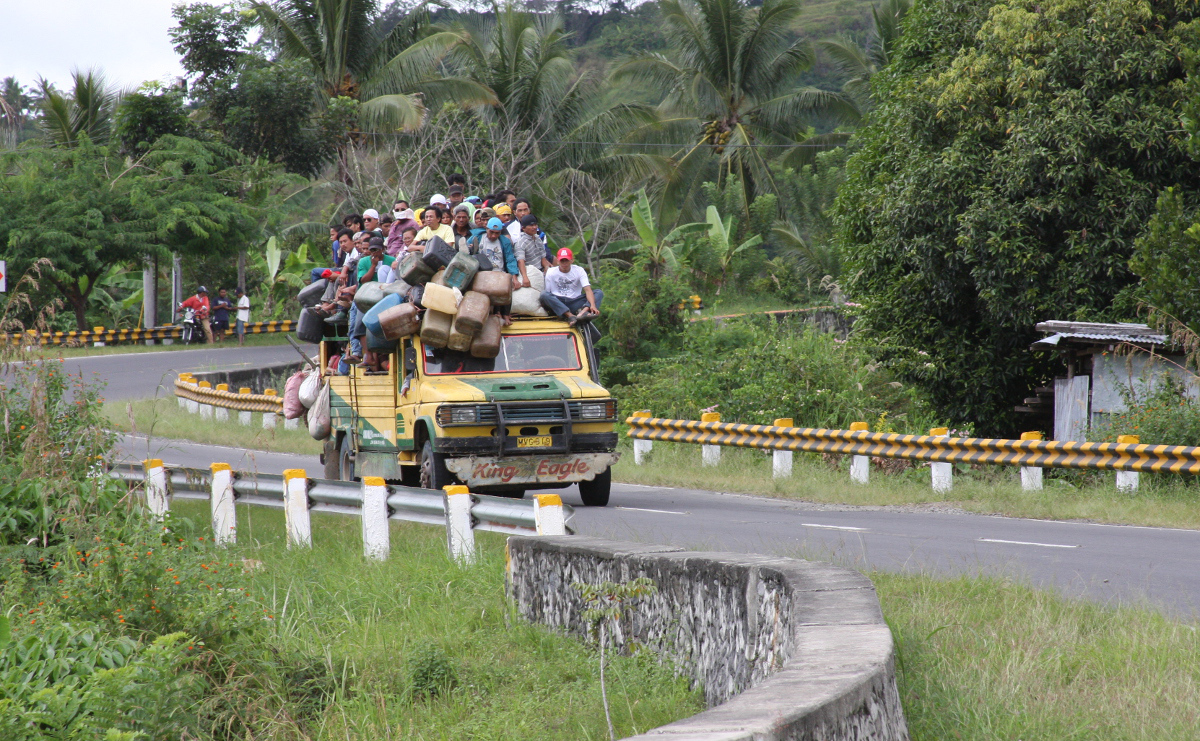 Ever heard of a double decker jeepney?  Does such a thing exist?  Well, not really, but this could almost be called a double decker, as the roof of the jeepney is even loaded with passengers!  This is on the outskirts of Davao, in the Marilog District.  Quite a sight!

I have to say, while this is an extreme example. if you move to the Philippines, or even if you just visit, and you go out into the provinces you will find overloaded jeepnies to be very common.  Maybe not as much as this one, but you might have a few people on the root, even on the hood!  In Davao City this sort of thing is heavily regulated, and you won’t see anything like this inside the city, because the driver would be in serious trouble.  But, outside the city – well – anything goes!

They say that “it’s more fun in the Philippines” and I suppose this is proof that it is true!  I mean, you can ride on this jeepney for only P8… how much does it cost to go to Disneyland? 😉

How about you, would you ride this jeepney?  They say there is always room for one more passenger!

There is something dangerously refreshing about fewer restrictions (like seat belts)….

Yes people here have lots of freedom. Even freedom to do stupid things and kill themselves.

I always wear a seatbelt. One feels a lot safer. Plus they save lives. Some laws are definitely needed, right?

It’s great that they don’t allow, for example, a jeepney filled with passengers (as shown in the picture) in Davao City. That shows that Duterte cares. It’s too bad that others don’t really care about people’s safety, right?

Jeepnies have no seatbelt. In cars there are seatbelt laws in the Philippines. The law is strictly enforced in Davao. I once got a ticket for not wearing a seatbelt.

I once had to pay the MMDA dude 500 in my remaining 20’s because (surprise) I stupidly gave a free ride to someone to her bus stop. Stupid me!!! “Alam mo, pasko araw-araw dito na” daw. I’ll defer adding the appropriate expletive for that here.

Live and learn, I suppose. 🙂

The fare depends on the distance from pickup to destination. True the minimum has doubled to 8 pesos over the years, but don’t expect to go from Davao to Zambaonga for 8 piso. As for that second layer of passengers, any LTO checkpoint may (at their discretion) fine the driver and take his licence pending payment of the possibly significant “multa”. Sometimes that happens but only perhaps 1% of the time in rural Minadanao – if that often. People have their preferences and may wait for a day or two to climb up top of an overloaded but preferred jeepney… Read more »

Hi Ed. I ride jeepney all the time, so I am aware of how the fare system works and have written about it on the site many times.

It’s really sad where money over rules safety in so many things here.

I don’t feel this is a money issue. Jeepneys are not operated by big money hungry companies
It is more an issue that way out in the province there are very few jeeps available.

Whether it’s a money issue or not, it’s still very unsafe overloading those jeepneys w/o regard for human life.

Bob, not in direct response to you, but rather in context of your own comments. In proper perspective and irrespective of nationality, consider when you’re totally dehydrated standing out in the blazing sun waiting all morning for a jeep in the “boondock” to get to the city far below to buy critical groceries you can’t walk to. You know that only 3 will pass that way *this* day. Will you let the third and last pass you by? Then what for you? You will pass out and sleep on the road hoping that you’ll have better luck the next morning?… Read more »

PapaDuck, in total fairness, it’s the *passengers* who insist on climbing on top. That those passengers might pay the same as those who might chose to ride inside has no bearing on their desire to ride up top. Often lots of space in side but overloaded up top. By your argument, why would that be?

Whether it’s there desire or not, it’s still very unsafe riding all those people on top. Like i said above, there is no regard for safety in many things here and money is a cause of a lot of it.

PapaDuck, absolutely yes, “unsafe”. People die because of their choices. However people also die because they don’t catch the last and only remaining jeep or any available transportation passing that day. That’s certainly the case in the mountains. It also reminds me of “Typhoon Millenyo”. I was stuck at the SM mall. I stupidly tried to wait for hours for the usually ‘regular’ mini-jeep and didn’t hop on the back of the truck that took a hundred more intelligent people close to their homes. Several hours later I braved the still driving rain and winds and waded my way through… Read more »

Hi Bob, we ride the jeepney here in Manila sometimes when I don’t use the car They are good cheap transport if you get a good driver, most of the drivers especially The young ones are a bit crazy taking to many chances but that’s Manila, Been to batangas a few years ago got a lift of a sugar cane truck there were me and my friend 2 foreigners waving at people going through some rural villages in batangas on Top of this truck lol, point is your glad of a lift when your out in the sticks it’s more… Read more »

I see this pretty often here. I live in a small barrio in Tarlac province. Only white guy in many many miles…lol. This is pretty common here. That and habal-habal.
I see no harm in this.. growing up I rode atop hay wagons and in the back of pick-up trucks and survived it all.
I think too many people are up-tight about safety and need to lighten up some. The world is a big place and there always was more than one way to skin a cat.

I rode on hay wagons too when I was younger. The hay wagons I rode on didn’t travel that fast. Plus there is a huge difference between a hay wagon and a public transportation vehicle like a jeepney. Times have changed since the hay wagon days. People were a lot more careful back then. At least they were where I lived. Parent’s don’t raise kids to have them injured/killed on a public transportation vehicle. We all know that life is filled with possible hazards. Why should someone be allowed to add to it because they want to make a buck?… Read more »

I tend to agree with those who say that safety is over emphasized these days. The way it was when we grew up, we should all be deal if you think about it.

People used to “hitch hike” along, long, time ago. But that isn’t very safe anymore. So, I guess it all depends on where one lives as far as being safe is concerned.

I’d always side on the side of being safe. Being aware of ones surroundings.

Safety is so important in my book.

You are certainly entitled to your opinion. I certainly believe safety to be important, but going so far overboard takes the enjoyment out of life.

It’s better to go overboard with safety than not have enough safety and have loved one injured or killed in an accident due to negligence.

I agree PapaDuck. I see too many avoidable accidents. Seems everything is just supposed to be fun without thinking about safety. Then someone gets hurt and everything changes. In my opinion that’s why there are so many laws.

Not too long ago a friend of my son’s was killed. He was riding a motorcycle and wasn’t wearing a helmet. They need to not only have a helmet law but inforce it.

There *is* a rather strict helmet law, and more days than not there are LTO “checkpoints”. There are also cellfones, and while they pull over hundreds of motorcycles, many thousands are aware to avoid the checkpoint. Quite a game.

Strict helmet laws where? Not on the island of Bohol. Not outside the city limits of Cebu.

There probably are very strict helmet laws in Davao City but how about outside Davao City is a helmet law enforced?

Safety is important, but as you say, it goes a bit far these days.

Good and cheap transport, I totally agree with that!

in 2013 my wife and i were riding in a jeepney in naga city and the police gave a ticket to driver for having people riding on the roof of our jeepney.. i myself like to ride in jeepney’s but it is so dangerous to ride on top of one that is something i would never do.

Riding on top or even standing on the back of the jeepney is not allowed here in Davao City either. I have never seen it happen here, they don’t even try to get away with it. Out in the province is a different story, though!

I agree, when i go to thew province I see motorcycle loaded with and entire family! Tricycles with ten sac of rice and so on… It’s a nice feeling of community.

With his wife and 3 more kids holding down the sack of rice hanging off the back of the bike, it is a bit scary to see their baby balanced precariously on the handlebars.