A month or so ago, Feyma and I moved to new location in Davao City. I wrote about that, so if you follow the site, you probably Artie knew that.

I also told you that we were downsizing. The reason for downsizing is because our family, those living at home, is shrinking. Our kids are growing up.

There was a time when we had 10, perhaps more, people living under our roof. Right now, we are down to six people living in the same house. In May, that number will dwindle to only three people. Around mid-May, Feyma, Aaron, and Jared will be going to Alaska and working there for about six months. They will be doing this each year for the near future. For Feyma, probably for five more years. Since the boys are young, and just becoming adults, they will decide how long they choose to do this type of work. So, as you can see, downsizing was both feasible and necessary.

One of the choices we made in downsizing is that we would no longer have a maid. For the past 18 years, we have pretty much always had a maid to help out around the house. There have been a few gaps when one made quit and we were still searching for a new person to replace her. But, those were only short times. Now, unless we have a major change of heart, we simply will not have a maid at all. 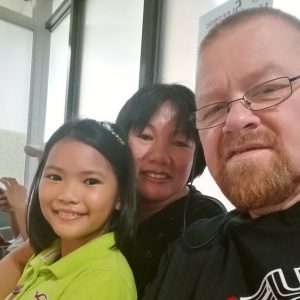 So far, I feel that it is working out fine. We have a much smaller house, so there are fewer chores to do, and all of us are pitching in to do our fair share. That includes me. In the past, I guess I kind of had a life of luxury, where I basically didn’t have to do anything as far as household chores. Of course, when we lived in the United States, I certainly did my fair share, but here in the Philippines having a maid meant that I mostly just had to concentrate on my work duties and living life.

In many ways, having a maid creates problems. Trying to teach her to do things the proper way is always a hassle. We have had incidents where maids stole from us or created other problems in the house as well. So, this move keeps the drama level down as well.

When we decided to move to the Philippines, one of the things that we look forward to was having a maid to help take care of chores around the house. Of course, at that time we had small children, ages eight, four, and less than one-year-old. Now, our kids are more or less grown up. That cuts down the workload a lot. In most ways, over the years, having a maid was a good thing, and it rarely created problems (although, as I pointed out, it did from time to time). Feyma and I are at the stage in our life, though, that we just don’t feel we need a maid any longer.

For half of the year when there will be only three people living in the house, all the more, we will not need a maid.

Yesterday, I turned 56 years old, so, transitioning to a different phase of life is kind of normal at this age. In fact, this new stage of life is something I’m looking forward to, being able to spend more alone time with my wife, and such.

Happy belated birthday bob:) of all places why did your family choose Alaska to work ? I have heard their economy is good tho

Good pay, good employer, free rooming, free food, etc. It is a good place to work! Also the work crew is 80% Filipino, which they like.

is it true that alaska has no income tax?

Alaska has neither an income tax or a sales tax! Only State in the US that has neither.

New Hampshire is another state that has neither an income tax nor a sales tax.

Bob Martin I can see the income tax , how do they make up the sales tax?

it’s an oil economy! They actually give money to the citizens every year!

i.e… they tax the oil companies

Wow I didn’t realize that so many Filipinos were in Alaska that good:) I knew they paid good my ex wife’s family worked there for years

Yep, at this particular company, it is largely Filipino. Feyma worked at another place there that was mostly Mexican, but still about 35% Filipino.

Hi Po, maybe time to change from maid to caregiver. Just adding some humor to make you masaya. Anyway one of the perks, for me at least is having a maid or Filipino family member work to earn their money instaid if asking for money.
Update on our adventure. We purchased house and doing remodel. Going to be vacation bahay maybe 4 months a year. I am older than you and starting this project is proof after retirement life is still exciting.

Good luck on your adventure!

Hi Bob I can never really understand the Filipino fascination with maids. Sure if you have a house with 10 people in in then help is required or near essential but I’ve seen small households in less wealthy areas that have maids. Is it a status symbol for some? When I was out of work for an extended period and staying in our house in Davao I used to wake up around 5.30 and sweep up those damned Calachuchi leaves which had fallen around the front of the house. This was not an arduous task and I considered it good… Read more »

Hi AJ – Nice to hear from you, it has been a while. Hope you are doing well. LOL about the leaf sweeping!

Yeah, I actually like it better without a maid! A little less drama and more peace.

Better to pay a someone to do cleaning and chores, if you have spare cash, than let them starve in poverty. That’s the logic, while you can focus your time on other productive matters.

Marika, I don’t know where you are, but what you wrote used to be true many many years ago. Noi more today for a long time already. Today it’s impossible to find a “helper” (katulong) for a reasonable wage with free kwarto and kaiin and reasonable private expenses. There isn’t anyone who wants to work, is not a thief and liar, intent on tearing the family apart, Sadly the last 10 years it’s increasingly the opposite. I gave up trying to find a good honest one a few years ago. Better we host family in need come live us until… Read more »

LOL Ed, you must be the same Ed from Bukidnon. Take it easy, though, because not all katulongs are liars and thieves. I agree they are hard to find these days, but have you tried hiring an older, married katulong, as opposed to hosting a large family in need to do household chores and take care of your 5 kids in exchange for free kain at kwarto? Ubos ang bigas kung malakas kumain. Back when I was a kid, Mom used to hire katulongs from the agency in Manila. In addition to the one maid we had from the Visayas,… Read more »

If I didn’t have a maid I think the one thing I would not like to do is laundry. But it turns out it is probably easy to find someone to do laundry. There are at least two ladies/families in our neighborhood that do laundry for a small fee.

I have a teenage miece who lives with us, and will be doing so in the future. She is happy to do the laundry. We have a US washing machine, so it is fairly easy.

“Yesterday, I turned 56 years old, so, transitioning to a different phase of life is kind of normal at this age. In fact, this new stage of life is something I’m looking forward to, being able to spend more alone time with my wife, and such.”

Absolutely. I love my children, but really enjoying the move we just made. A smaller house, but in a more central location. As you know, I am also 56. Still some years before I retire, but we have an amazing amount of freedom now. Enjoying life!

Great to hear from you, Tom. Yes, we are the same age! I wish you well, and hope you keep enjoying life!

Bob,
We have never wanted a maid. We value our privacy more. I’m up at 4:15am most mornings. I get most of the cleaning done before Anne even get’s up. Another problem i’m hearing from other foreigners is it’s hard to find good help.

It is indeed getting very hard to find good help, or even any help at all!

I am also an early riser, often up no later than you mentioned.

test one-year strange posting ban. Let’s see if I’m permitted to respond appropriately now. Perhaps the ban was a mistake and the new interface fixes it? If so, my thoughts to Bob’s posting herein … Readers may have noticed my prior postings over the years about katulong. It’s now about 2 years since I’m “daddy, mommy, katulong, yaha, labadero, topos ‘the only person who works to actually earn the one'”‘. I’m 10years+ advanced on Bob’s age, about the same time permanent Philippines resident, married with kids 10 7 5 4 3. My wife had us broke paying for 5 katulong… Read more »