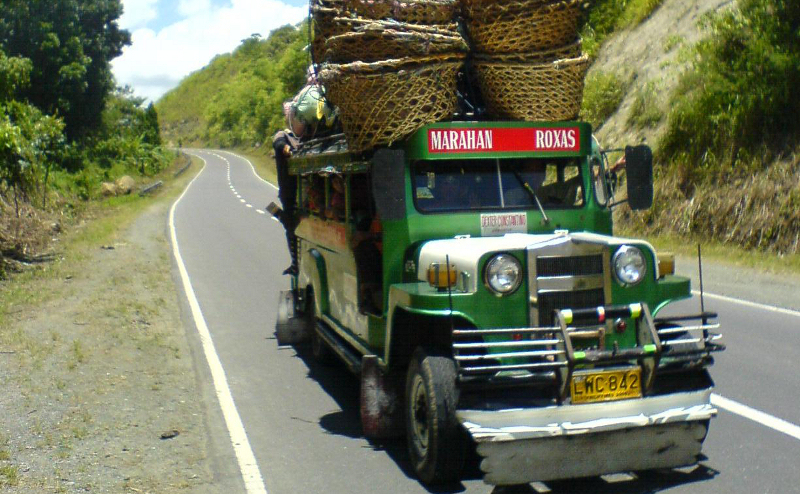 This jeepney is running from Davao City to Marahan, which is not far from Bukidnon, albeit still part of Davao City!

Davao is a huge city!  In fact, it is either the largest city in the world, or 2nd largest in terms of land area.  The reason that it is unsure whether it is the 1st or 2nd largest is because both Davao Vidy and Mexico City say that they are the largest.

Loaded down, this jeepney is a real workhorse!  On trips to Davao it carries food crops that will be sold at markets in the City.  On the way back it carries items from the City that are needed by folks out in the Province.  Passengers too, of course!

Would you squeeze in for the ride?

The actual city is quite small, but they just seem to have moved the boundary signs well out and call it Davao City, I think if another city claims to be bigger , they will just move the signs out a bit further ! (:-))

Hi Malcolm, good morning! Ha ha… you never know. I don’t know, for me, I think the boundary signs are were they always were, but they do extend way out away from the city! Maayong buntag!

Maayong gabii Bob… we are arriving around April 12th in Davao..after a week or so in China…

Interesting… I did not know that. Thanks for sharing.

Almost the same but Davao has a slight edge.

Since I seldom see a new jeepney doesn’t it make you wonder if they ever make new models?

Hi Rusty, I don’t recall ever having seen a new Jeepney! There is a factory, I believe in Quezon City, where they make them, but I don’t think I have ever seen one anywhere close to being new! Ha ha.