Good morning, readers!  How is everybody today.  If you have been watching the news at all over the past week or so, you are well aware that the Philippines has been hit hard by a super typhoon.  Yolanda, also known as Haiyan dealt a devastating blow to the Central Philippines.  Many people were killed, and property was not only destroyed, it was pretty much wiped out in the affected areas. 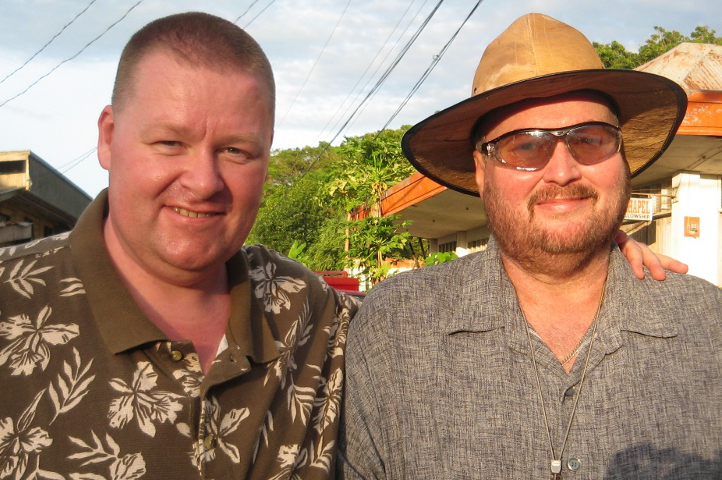 If you have been a long time LiP reader, you might remember a fellow named Rusty Ferguson.  Rusty used to write here on this site a number of years ago.  He also has had a number of sites of his own as well.  Rusty is an American who has been living in Bogo, in Northern Cebu.  At one point, back in 2009 I believe, I made a trip up to Cebu, and I went to Bogo for a couple of days and visited Rusty.  Rusty and I share a number of traits, and I felt like we hit it off during my visit and remain friends.  We don’t always stay in contact as much as we probably should, but I consider Rusty a friend.

When Yolanda hit last week, I was concerned about Rusty, because I had heard that Bogo, and most of Northern Cebu took a big hit from Yolanda.  After the storm hit, it took several days before Rusty was able to get online, and that raised my worry even more. But, finally he posted on some of the social networks and I knew he was OK.  Well, physically he is OK, but the typhoon really played a number of lessons on him, and put him in a lot of inconvenience.  For one thing, his area is without power, and it has been said that the area may have no electricity for up to 3 months (some are saying 1 month, but that is still a long time to live without electricity).

When Rusty posted on Google+ and Facebook over the weekend, he said that he had retreated from Bogo and was able to make it to Cebu City.  He said he was staying at a Pension House in Cebu, but was not sure how long his finances would hold out and allow him to stay there.  He said that he may have to go back to Bogo and rough it out there.  Rusty has lupus, and has experienced numerous health issues over the years.  I was pretty concerned about Rusty, his health and the possible living conditions he was facing.

I decided that I wanted to help Rusty out a bit, so I sent him some cash to help him stay a bit longer in Cebu, and I also made him an offer that would help him more.  Rusty accepted my offer, and I want to lay it out for you too.  My offer I made to Rusty was will allow you to extend a bit of assistance to Rusty as well, if you are so inclined.  It will also allow you to extend support to the tens of thousands of victims of the typhoon who live in the Visayas region of the Philippines.

Here is what I am doing.

I have personally already made donations to the cause from my personal funds.  I am extending you an opportunity to get a book that you might want and also extend your assistance.  This gives you a chance to help an American here in the Philippines, Rusty, or extend help to Filipino victims through the red cross.

Good luck to you, Rusty, and to all victims of Yolanda.  My heart goes out to each and every one of them!

Good job Bob its times like this we all need to come together. My wifes dads side of the family has lost everything. A few of them were able to get on the C-130’s to Manila. I work in a office with mostly Filippinos. This friday they are having cook out and all the money made will go to the Philippines.

Hi Nathan – I hope that your co-workers raise a pile of money! The victims in the Visayas need help badly, as you already know. Very sorry to hear of the loss in your family!

Hi Bob,
Sorry to hear about Rusty. I remember reading his articles. I know if I make a donation through you or ” LIP “, it will get to where it is intended. All of it.

Thank you, Bob, I appreciate your assistance for Rusty. Several people have already purchased books with proceeds going to Rusty, so I am happy to see that the LiP community is supporting him in his time of need.

Great thing you are doing Bob. I also have Lupus and it is an ugly condition that requires a good environment to keep it from rearing it’s ugly head. Stress also needs to be kept to a minimum with Lupus. Rusty is a trooper and I also wish him well. Today I am going shopping using the donations I have received on my site from overseas and will be sending those goods up to Tacloban hopefully by tomorrow.

Thanks, Corey, and good luck with your relief efforts. Any assistance that can be sent is badly needed for sure.

Bob, I am also wondering what has happened to Reekay at Lifebeyondthesea.com and also Our friend from texas UJ over at Texaninthephilippines.com Watching the news here in San Francisco this is STILL top of the broadcast stuff six days in, and they did show a flyover shot of Calbayog Samar where UJ lives that looks as bad or worse than the constant video of Tacloban. have you heard from ether of them? As an FYI all of our relatives are accounted for and A-OK. I also got word that one of my nephews that is stationed at Okinawa is on… Read more »

Hi Joe, I saw Henry posting on Facebook, so it looks like he is OK. I have not heard anything from UJ, I hope he is alright.

Joe, Bob
Randy Landis who lives in Calbayog is doing alright. They just don’t have power, maybe for a month and parttime running water.

Bob: Kudos for being a helping person. I have sent to the family there as I could and also to a large organization but if I am able to do more I would rather do it through you because of the confidence I have that it will go where it is supposed to go. I have seen a time of hardship and sorrow allow something stronger to emerge and I hope that can happen. Also, if you get a time to let us know when you will be doing the Christmas project we were hoping to be able to participate… Read more »

Hi LeRoy – I’ll be announcing something for Christmas pretty soon, it’s getting to be that time of year! If you can participate in that, it sure would be great!

Thanks for the updates Bob. I’ve been wondering how some of the LiP folks have fared.

You are most welcome, Pete! It seems like the LiP family has ridden out this storm mostly intact.

Hi Bob. Good that you are trying to help. We are offering Rusty a place to stay inside our compound in Consolacion. Our gatehouse has a second floor when he can stay for free for 2 months. He has to pay for power and water, and get himself some simple furniture, that’s all. Let him email me if he is ready to leave Cebu City. There is a new SM nearby.

Hi Joop – I have passed this along to Rusty. Internet is spotty for him, so I hope he gets it tonight. He will contact you directly. What a wonderful and generous offer! You have shown great generosity!

Hi Bob,
I have also offered the main house to an International Disaster response team for a few months.
At this time we all have to do what we can.
Looking forward to hear from him. Is he alone or will he bring a wife/gf with him. There might be room for another desperate expat as well.
joop

Joop, you are a good man!

Rusty has a long time girlfriend, and I would expect that he would be with her.

They are both welcome. Good that he’s not alone. He will have good company in the Main house too. An NGO called Disaster TechLab has taken up my offer to set up HQ there. They have tons of portable communications and internet connectivity equipment with them. They will arrive next week. For the moment I keep the ground floor of the gatehouse free for my brod-in-law from Maya, in case he would want to come to the food rather than waiting for the food to come to him. These are testing times.

We must all do our part. I finally made my move to Cebu in October and it sure has been an awakening. I am living in the Movenpic on Mactan, a large concrete tower with back up generation. So I am OK, but that was scary for a guy from the Midwest. Much of Cebu lost power and water, so I ended up moving my girlfriend’s kids and family to my condo until power and water was restored in their home. There is some property damage, but small stuff to what we are seeing in the news with Tacloban and… Read more »

Hi John – What a welcome you got to Cebu! Earthquake followed by a super typhoon! Hang in there, things will normalize, I’m sure of that!

Bob,
You and Mrs Feyma and Family always step forward when there is a time of need. You are such a great example for other people to follow. I’m just so heartbroken as I watch the devastation and human suffering on TV. My father in Ohio said he donated through Catholic Relief Services there and they receiving a lot of donations at his church.

Hi PapaDuck – We always like to help when we can, it just makes us feel good, and helping others is always a good thing to do!

Bob, My wife and I are within 5 years of moving the Legaspi City area and I have been waiting to pull the trigger on purchasing your books. But when I seen that you were helping a friend with the proceeds of you sales, I had to take advantage of that. So I just ordered your Ph-Pro All-in Package and put “HelpRusty”(without quotations) in the coupon, to help Rusty in this time of need. I have also started a campaign to help families in Tacloban. We have several friends here in the States that still haven’t heard from their loved… Read more »

Thom – Thank you for your purchase, I hope you enjoy the books! I have already sent along some money to Rusty. You and many others supported the cause in the past 24 hours by purchasing some books, and one person just sent money without buying anything. I thank you all, and I know that Rusty does too!

Good luck on your potential move, Thom. Any time that I can assist you, please don’t hesitate to ask.