For Filipinos who are Catholic, they will celebrate Simbang Gabi mean, meaning “night mass” or “evening mass” or “Misa de Gallo” (rooster’s mass). It is a nine day novena in honor of Mary the Mother of Jesus Christ the Savior. It is celebrated by going to mass everyday from the 16th of December  to Christmas eve December 24th. Most churches celebrate the mass at dawn. When I was growing up we usually go to church at 4 am. Still sleepy at first, sleepiness would be gone after the mass starts.  We had to go with my family. We enjoyed seeing our other families there too. 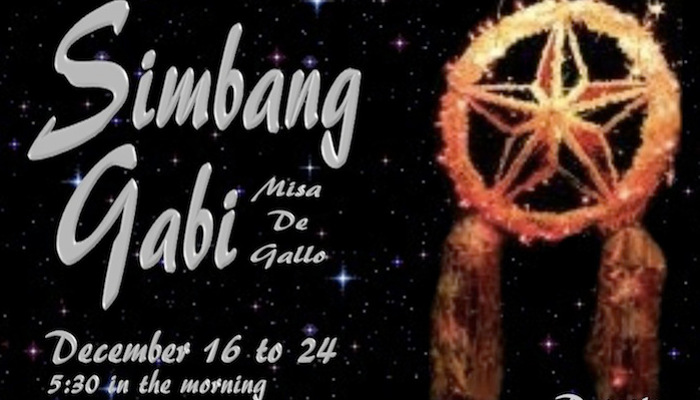 In the Philippines, most streets that lead to the church are lit up with Christmas lights or lanterns (parol), the lights I guess are signifying the star that led the wise men to the birth of Jesus Christ. In our province when I was growing up after the mass the church had a bit food at the back. After the mass, any church goers can partake the snacks. It’s for everyone. Not sure now though if some small church still do that kind of thing.

For you people that live near the catholic church. Have you noticed the church bell keeps ringing from the early hours during this time of Evening Mass? The church will keep ringing that bell for people to rise up from sleep in preparation for the Simbang Gabi. Some churches start the bell ringing at 2:00 am, and don’t be surprised if a band might roam around your street / neighborhood for a celebration and to wake you up.

Our helper goes to church now and she really goes everyday. She told me that at the churches she goes to  it’s overflowing with people. That’s why she goes earlier for her to get a place to sit down. She told me that it’s mostly the whole family that attends the mass. Some families after church will have breakfast together and eat the Filipino delicacies.

Enjoy attending the Simbang Gabi with your family. Lets pray for peace and love for this holiday season. Hope everyone will have a good Christmas celebration and have a great New Year ahead too. Praying for our troops that fought for our freedom. Have a safe celebration everyone.

Feyma; As a teenager in the early 1960’s on Christmas Eve as I’d head out the door of our house in the Dorchester section of Boston, my folks would shout; “Paul be home by eleven” Not tonight dear parents, me and the gang (Not what gang means today) are going to MIDNIGHT MASS.” I’d reply. But here’s the truth, they’d sooner see Santa on the roof then me or my friends sitting in a pew at Saint Ann’s Church on Neponsit Ave. We were at a party and sinning. In nomine Patris et Filii et Spiritus Sancti (Amen) And a… Read more »

Hi Paul – Hmm, never thought you are that wild Paul? ;-). Lol (kidding)… Hey you’re just being a typical teenager back then. 🙂 …. Most of the teens nowadays though are getting wilder. Know what I mean?

Happy Holidays to you and your family too!

I remember the drive in theaters on Easter and Xmas Eve..Sunrise Mass

The older I get the more agnostic I’ve become.
Does prayer help the world ?
I have my doubts , but who ever has faith that’s their choice and if helps them come to terms with this world more power to them

We have here in hawaii on the Big Island at night

Good to know Mark. Thanks for sharing the info!

Simbang gabi mass starts at 4AM here in Cebu province. Later you can see people riding home from mass on motorcycles and in multicabs carrying their own plastic chairs and stools. It’s always packed during mass, so they bring their own seating.

Hi Queeniebee – That’s also the same time in the morning when I was there back then. Yep, so true it’s pack everyday. Here too in our area our helper said that if she’s late in going to church in the morning, she will be standing outside the church. Yep, some people here are bringing plastic chairs too.

Happy Holidays to you and your family. Cheers!

I do really miss Simbang Gabi back home.I had fun being in the Church Choir???⛪️Miss those days

Hi Joyz, I understand your feelings. Maybe soon you can come back for a visit during the holidays. Take care!

Thank you Feyma, that’s my goal?I wan’t my husband to experience Christmas in the Philippines.And my next vacation will be on Christmas time??(God willing)By the way,Merry Christmas in advance?