That is one honest taxi driver!

Last week, Feyma and I were riding in a taxi and I noticed a plastic card hanging from the front seat.  There is a picture of it later in this article.

Basically the card had a photo of our taxi driver and said: “One Honest Taxi Driver”.

I wondered what this was about, so I asked the driver.  He was a little hesitant to tell me, I think that he was embarrassed or shy.  Upon a little prodding, though, he said that he had found an iPhone in his taxi and took it to the police.  The police had been able to locate the owner, and the iPhone was returned to the person that lost it.  The taxi driver was rewarded with this honor from the police. 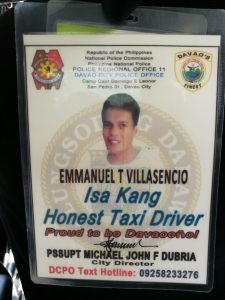 I don’t know for sure, the driver did not say, but I would suspect that he also got some kind of monetary reward for turning in the phone as well.

Can you imaging.. an iPhone costs as much as these guys make in probably 4 months or so!  To find it in your cab  and then turn it in to the police takes a real honest person.  I was proud to have met my driver, Emmanuel T. Villasencio.  He was a humble man, and very kind.

When we started approaching our destination, I told Feyma to give a nice tip for Emmanuel, I wanted to extend my own little reward for his good deed.  Feyma basically gave him about double the fare.  He really didn’t even want to accept it, but he did.

Emmanuel, if you read this, thank you for showing how great Dabawenyos are!

Most taxi drivers in Manila want to rip you off before you even get in the cab.

Big difference between Davao and Manila. This kind of thing is quite common in Davao.

Not sure about all parts of Manila but my experience last summer was the exact opposite. We used taxis more than normal since we were away from the areas we were familiar with and usually the Jeepneys were more full than normal. But we only had one taxi driver try not to use the meter in all the trips between Mandaluyong, Makati, Green Hills and other points. We also negotiated a fare for a late night trip back to the condo that was out of the drivers normal area. Which I didn’t mind since he got us home faster than… Read more »

That is great for you, James! I’m glad that things worked out for you.

Nice! Unfortunately Filipinos like this seem to be few and far between.

Not in Davao City, it is actually quite common here. It was just my first time to see this kind of a car didn’t hanging inside the taxi cab, which I thought was kind of cool.

Sadly though and to add to that, most taxi drivers in Manila are Visayans (Bisaya) who have no qualms in ripping off fellow Visayans.

Great thing about it is, I’m not in Manila. I avoid the place like the plague.

No disrespect towards the taxi driver you’ve just met and looking at it in different perspective, an Iphone in his possession would have been useless in the long run due to it’s robust security features. I did cellphone repair as a hobby for 5 years and have a few knowledge about how Apple protects it’s products and end-users. Upon powering-up, it will only take Apple California a few seconds to track down stolen/lost Iphone/s worldwide and about 5-15 minutes for the NBI to be at a thief’s lousy rearend to respond.

Great story Bob. Not enough of these going around these days.

Thank you Liz, I appreciate that. I hope you’re doing well.

Bob:
The other side of the coin! At Car World in Olongapo a customer’s I-phone went south. The mechanic who took it and his girlfriend who also works there were caught by technology, as all photos taken with his phone were automatically sent to his cloud. When strange pictures started showing up on his computer the two thieves were busted. The moral of the story is: never steal what you don’t fully understand. I-phone returned, two former employees became unemployed. Bless the Cab Driver; he is the norm in the Philippines, not the exception.

Hi Paul, I’ve heard other stories about people getting caught by technology like that. Isn’t technology a great thing? It’s just another reason I love to live in Davao City. Low crime, nice people, and a fairly good reputation. I agree with you that most taxi drivers are like this guy, not like the bad ones that you hear about all the time.

Back at SEH. Love having every other weekend off!

I noticed a while back you posted about being back again. It almost made me start thinking about going back my said well no nevermind on that. Haha.

Glad to read you gave the driver a good tip. Most of the times I use taxis in Iligan City, I go between the same 2 points so I know what the average charge should be. Few taxis in Iligan use the meters. There was one time a driver wanted 3 times the average. I paid him what other drivers have charged me and told him if he wanted more he would have to come back with the police. Needless to say I took down the number of the taxi etc. The driver never appeared with the police LOL. I… Read more »

Hi Bob, what you describe sounds a lot like my experience riding taxis in General Santos city. They never want to use the meter, and they always overcharge. I like it here in Davao City, it’s very rare that the driver doesn’t use the meter, infect I can’t recall the last time that happened. It’s like a different world here. A different Philippines at least.

Actually everyone has been wonderful! Of course I am 30 years older now!

Yeah. My thing is that it is unlikely that I would ever want to move back to the States. I have a 20 year old son living in Vancouver though… Would there be any job opportunities at SEH for him?

They hire temp through Aerotek. Pay is way more than I got at Wafertech. However for a youngster Wafertech isn’t to bad. They hire constantly. The Aerotek office is in Portland at Cascade Station. Not sure what they would start no experience at. They seem to be a decent company and hoping I will be permanent in a year. I only have to work 2 more years.

Nice going! Encourage others to do this, it does help! ! There are honest people everywhere. .gig just don’t hear good news like this enough! !

A lot of people seem to like passing on negative things instead of the positive. I’m the opposite of that, I like to promote the things I see that have a positive impact on our lives.