January of the New Year in the Philippines the list of things to do, stretch’s in front of you like a trip around the world, but I’m not going anywhere. How bad can it be if you just accomplish one or two things a day? Why does it always sound simple when you write it down? Do I forget where I live, and how things work? Last July I applied for a new driver’s license, which was simple, quick and easy! But I’m still waiting for my license but I have a receipt to prove I’m legal. 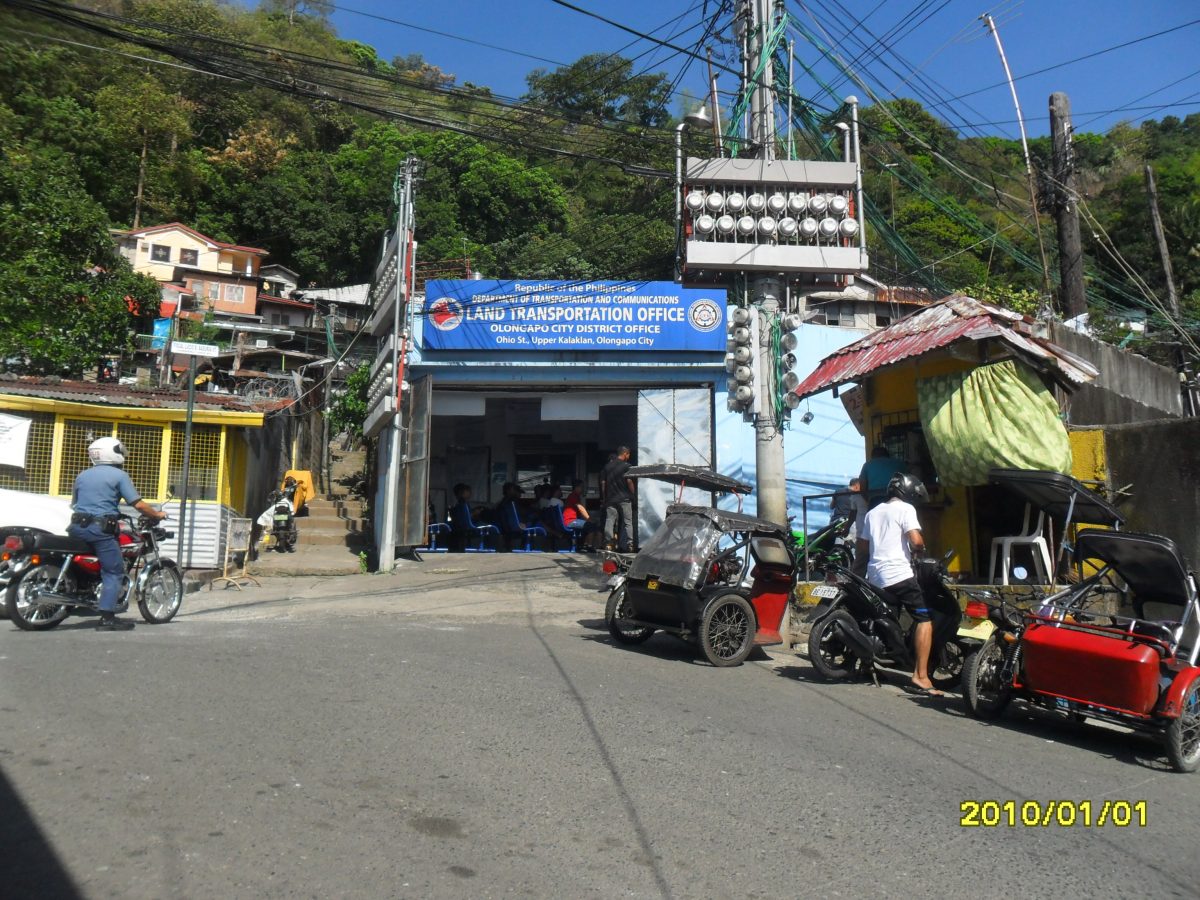 First on the list is to renew my tags on the car because my tag ends in the number one so January it is, please don’t ask if the tag ends in, Nov, or Dec because that has never happened to me I was curious so I went and checked the computer. 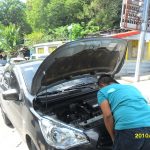 Trying to find the Vin Number 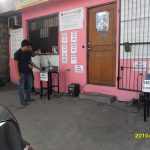 The renewal should be three simple steps…smog test the car, (If that Jeepney in front just passed I’m golden.) pay for the Philippine Auto Insurance, not to be confused with real auto insurance, then enter the Land Transportation Office (LTO) to pay the fees receive the new stickers and motor on down the road. Not this time, because after 30 years this was not so simple anymore. Remember my years of driving new old cars? Then I foolishly bought a brandy spanking new car in 2014, and the registration is for three years vice the normal one year. I should have seen the danger lurking over my head. Normally I would have prepared for it, but this time I was caught flat footed with my shorts around my ankles. I’ll blame it on my medical “Troubles “from last year.

LTO’s main man Boo-Boy who is Mayang’s HS batch mate has been assisting us since our first car in 1998. He informed us we had the wrong tag on our car, the tag we had (For three years) we were informed by our friend belonged to a Futon in Cebu. My-my now that is a pickle, do I have to go to Cebu or does he have to come to Luzon, or like two ships passing in the night do we both go to each other? I lift my hand up and said;” Whoa Nellie the dealership for Mitsubishi must somehow be involved! Paul got stubborn, take me to Car World!!! On the way I noticed a notation on the paperwork written by Boo-Boy when he entered my tag in the computer he wrote ABB-##51, I smiled because my tag number was AAB-##51, when at Car World I pointed out the error but because of my Kano-ness my I was ignored. Ahh fresh coffee, I might as well have a cup! I went outside took a picture of my tag, put it on top of the paperworks with the wrong tag number, did not say a word and pointed from one to the other. The pretty secretary, followed my pointy finger, smiled, then nodded to me and the problem was solved. (Almost) I sent the picture to Boo-Boy, and he replied asking us to bring the car back in the morning so he could check it. Of course we can. I’m thirty years older and so is he, assume mistakes will happen. If only the guy in CEBU knew the crap storm this old Kano had just saved him. The next morning at the LTO, I made it seem that Boo-Boy was the reason the problem got solved, 30 years of friendship, it was the right thing to do to save face for him. We’ll take him to lunch soon… We that live here know why, those moving here soon will, write this lesson down and make your life easy in the future. 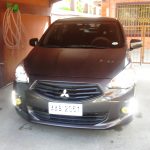 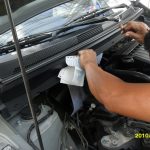 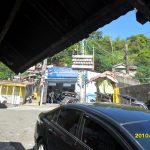 My car at the Philippine insurance store

So my friends, I still have a long list to take care of, so there will be a Part two of Volume 1 Change 2 mod 5, it’s where I want to live and it’s worth it.
Next week Part two…

Nick;
After my taco lunch I know I’m well and truly done. Then I start preparing for next year! (LOL)

It’s good that you are retired so you have time to take care of all these tasks.

Loren;
If I wasn’t retired I’d find a way to procrastinate until 2018

Great Story and lesson for all newbies to the Phil to be learned here.
Myself only being 4 years in and depending how the day was going, may have taken the Ugly American route: “You screwed it up so you should fix the friggin problem”

Neal;
My first year here I tried the ugly way, and found that I lost over and over again, then I remembered how I dealt with officers when in the Navy, there I started winning by never letting them loose. I’d smile, walk away and think; “Gotcha!” and we both got what we wanted.

Denzil ,
Or could it be that things that seem simple suddenly are made complicated by someone sitting behind a desk? (LOL)

Hi Paul
From what I gather Jan to Oct relates to the last number on the licience plate i.e. 0-9 and the second last number of the plate relates either the first 2 weeks of the month (0-4) or the second 2 weeks (5-9), you must re-reg within the first or second 2 weeks. Nov & Dec smoke test centers are closed so there are no plate numbers allocated for those 2 months.
By the way A Very Happy & Prosperous New Yeat to all.

Jack; As far as I could glean from their web site that was how I read it, but I never found the part about no November December renewal, but the truth is by the time I got to what days of the week you bring the car in, I started nodding off and took a nap.. So here is what I figured out. Jan I renew my tag. In 30 years the other numbers on the tag pertaining to the weeks, have never been enforced. Or Boo-Boy figured he was doing well to get me to show up on the… Read more »

One could, but that would leave a large hole in the lives of the spelling and grammar police! Plus I never type in capital letters I make my point with punctuation (LOL) even if it’s wrong!.

yeah i know i have a bad habit with large caps eyesight not that good ..And I never think about it offending anybody by doing it ….By the way your a good writer

Lenny;
Not offended at all, I keep a open word folder in a large font because I have old eyes, even my glasses need glasses. The PC Police on Facebook explained that capital letters, and I told them that I was political incorrect.. (LOL)

I have been learning all of this stuff in the last couple of months as my do-it-all helper is leaving us to go to Japan.

The wife will end up doing things though as too many service people in Davao get “nose bleed” when trying to speak English as they tell me.

PS – I’m doing the dry January so with me and you out of action the San Miguel shares are going to plummet!

AJ/UK;
The nose bleeds are common here, but have you noticed there is not an English karaoke song they can’t sing flawlessly? I just tell them to sing to me. (LOL) I feel the pain of those missing SMB’s!!!

Re-registered my pick up last week. 4300 ($120AU) Same thing in Australia would have been $700 plus!
Yet another example why its soooo much better here. Only took 45 minutes as well. Miracles do happen! Lol
Yes, how do them jeepneys pass the smog test?????

Adam; In the states the last time I registered a car was on 1992.and it was dear. I kept Florida as my home of record as they have no state income tax. But as a seaman sailing Asia my driver’s licence expired and Florida told me I had to fly 6,000 miles to go there to renew it. California had a very high state tax and had tried for years to make me pay. So the ship was in Manila, and I applied for a Philippine driver’s license, I used my expired license, and had to wait two years. To… Read more »

Adam;
As I said above if a Jeepney can pass, I’d dare them to flunk me! (LOL)

I also renewed my license here a few months ago. They had no plastic license to give me. Just the receipt and a promise I would get the proper license at some stage. Not holding my breath. It must be in the same place as my license plates tags! Haha