The night before Christmas in Davao

There is a poem that is quite famous, called “A Visit from Saint Nicholas” although these days, it is more commonly known as “The Night before Christmas.”  It was written by Clement Clarke Moore.   Although the original date that it was written is unknown, it was first published in 1823 by the Troy, New York Sentinel.  The original publication did not credit an author, it was anonymous, however Moore was later credited with having authored the poem.  Still, there is controversy, and some claim that the poem was actually written by Henry Livingston, also of New York.

Over the years, there have also been parodies of the poem.  One that I have become familiar with, and have always loved is the “Cajun Night Before Christmas” in Louisiana.

This poem/story has always been a personal favorite, I know that many people like it too.

This year, I decided to play with the poem and make a Davao version for expats.  I’m no poet, I can assure you, but I hope you find my version to be fun.  Here we go. 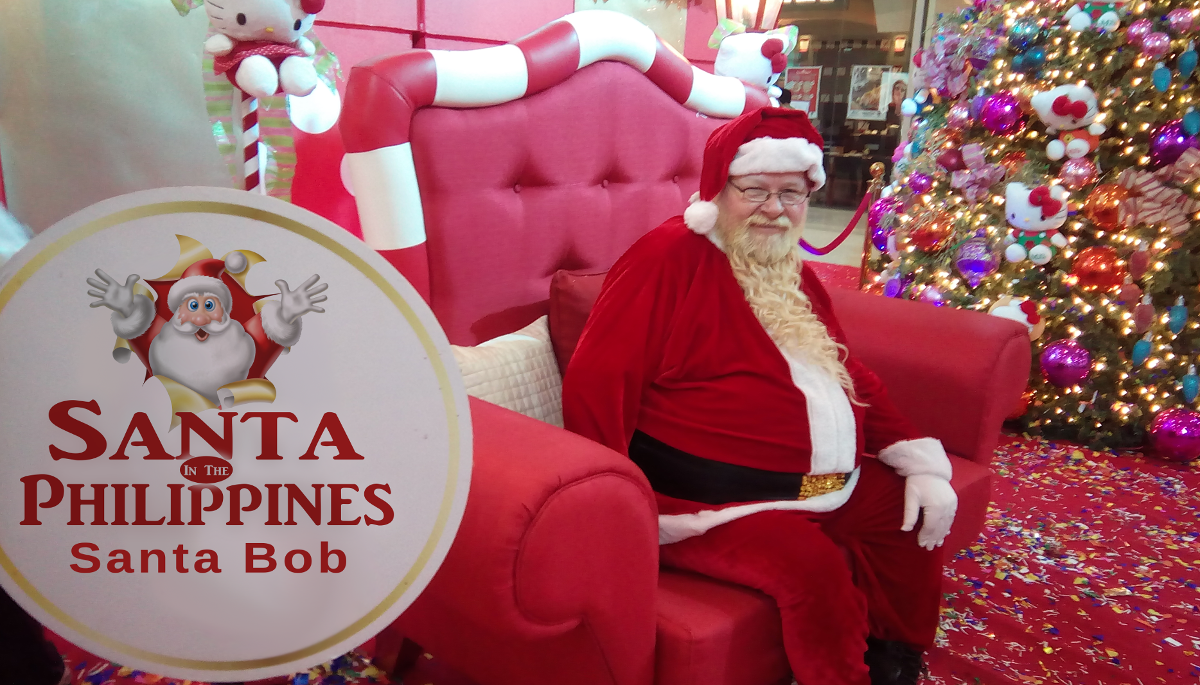 The Night before Christmas  in Davao
by Bob Martin

Twas the night before Christmas and we’re livin in Davao
The holidays are a little different here, let me tell you how

We ain’t got no chimney, but we don’t care
There’s snow and it’s cold back home, why would we want to be there?

We’re all really happy, just not in our beds
It’s Noche Buena tonight, and the food is what’s in our heads

Mama’s doin the cookin’ and I’m taking a nap
Hey, it’s hot here, I have no more energy to tap

But outside the gate there arose a big clatter
I even woke up, better go see what’s the matter

Christmas Carolers – at first I thought it was funny
But then they said – “sir, where is my money?”

The carolers kept singin, I didn’t care for the sound
But, if I didn’t give money, they would stay around

I gave a few pesos, and the singers were leaving now
Then suddenly I saw Santa’s sleigh, and it was pulled by carabao!

I took a second look to make sure I had nothing to fret
Yep, it was Santa, but he was dripping in sweat!

The carabao were slow and clumsy as to the earth they came
I realized that Santa was Filipino when he called them by name!

“Now Ding, hey Inday, Dong and Girlie;
On Jun, on Piter on Maria and Shirley!

Land there by the coconut tree, what are you drinkin?
There ain’t no chimney in the Philippines, what the heck are you thinkin?”

A few coconuts fell as the sleigh passed by the tree
If I was standing there, the coconuts might have hit me!

The carabao made a u-turn right up in the sky
When they landed, I noticed they left a few carabao pie!

When I got to the house, I saw Santa eating our food
Was Noche Buena early this year, or was Santa just being rude?

Santa was dressed all in fur, no wonder he was sweaty
Hey, he is being rude, he just ate all the sweet spaghetti!

A bundle of durian he had flung on his back
Maybe he’d leave some, for it would lighten his pack

As he snuck around he tripped and almost fell
But then he was happy, he found the San Miguel!

He was chubby and plump, so he had a San Mig Light
I thought to myself – that was alright!

A wink of his eye, and a twist of the cap
If he drank too much, he might need a nap!

But he drank just one bottle, then went straight to his work
He opened two durian and then turned with a jerk

He heard a bit of a sound and for a moment he froze
Then he ran for the door, he was quick on his toes

But I heard him exclaim as he went out of sight
Merry Christmas Philippines, and to Mindanao Bob – Goodnight!

Merry Christmas to all LiP readers

Hi, Bob- Now we know why you’ve been pretty quiet the past 24 hours. I’m impressed. It’s a very Filipino rendition of “Twas the night before Christmas”. This has all the makings of an intellectual property, and I honestly think you should copyright this poem to ensure it remains protected under your name for posterity. And also to avoid any controversy as to the authorship 100 years from now.

Hi John – ha ha… truth is that I wrote this about a week ago. My original plan was to post it on Christmas day, but then I got thinking that the number of readers will be lower on Christmas Day, since everybody will be spending family time, so I decided to put it out a little earlier.

I’m happy that you enjoyed it.

Very good and funny. You should keep it and make it a annual tradition. Hope you and your family had a great christmas and have a wonderful 2011

Hi Randy – Thanks for your comment, glad you enjoyed the poem!

Hi Bob;
I liked it (the poem)! It’s quite timely also, as last night our little carolers arrived at my gate to help welcome in the Christmas Season. Their kinda fun and we keep a large supply of coins for them. Between the singing kids and firecrackers the noise level dose seem to rise a tad this time of year, but all in all I do like it (albeit not so much firecrackers)

Hi Paul – Glad you enjoyed it! Ha ha.. yes, the kids are certainly out already and looking for those coins, so it’s good that you have a supply at the ready! 😆

BTW, firecrackers are illegal here in Davao. When we lived in GenSan there were a lot of firecrackers, but since moving to Davao 8 years ago I haven’t heard a single one! Ah… the peace! 😉

Bob;
A fireworks free zone! Now that’s something I could live with. Plus knowing all my inane comments are copyrighted makes me feel good!

Hi Paul – I’m glad that I’m giving you such a warm fuzzy feeling this morning. Just don’t tell anybody… they might think we are weird! 😆 Shhh….

Here is an article I received on a fireworks ban in Gensan. Thought you might like it: http://www.gensantos.gov.ph/2010/12/city-bans-firecrackers/?utm_source=feedburner&utm_medium=email&utm_campaign=Feed%3A+gensantosgov+%28General+Santos+City%29

And no this is not an advertisement. I get ads on my comments all the time in my blog. hahaha

Hmmm, I’ve been hearing firecrackers all week – in fact a string just went off. I’ll let y’all know how many I hear tonight, but it doesn’t sound like the enforcement rate will be high 🙂

If there were fewer firecrackers in Gensan I didn’t notice 😀

Haven’t heard a single firecracker in Davao…. for over 8 years since I lived here! 😉

I guess the ban only works if it is enforced. Much like here in Oklahoma where it is illegal to fire a gun in city limits. But still many people do it on New Years. Stupid people.

Hi jonaky – I hope you enjoyed it!

Hi, Bob- Further thoughts on my comment above. If you register your work for copyright, it’s protected throughout your lifetime PLUS 25 years. The Philippines is a signatory to the Berne Copyright Convention of 18??, so if anyone in the Philippines uses the poem commercially without your permission, you can sue them for monetary damages and maybe you don’t have to work as hard anymore in LiP. Hahaha

Hi John – Under current copyright laws, you don’t even have to register it. By simply publishing it, it is covered by copyright. So, every single thing that is on the LiP site is under copyright protection.

Thanks for your thoughts.

Hi, Bob- And here I was already seriously considering lifting the poem, tweak it a little and have it printed on Christmas cards to be sold in the Philippines, thinking that it was in the public domain since you released it in the internet hours ago without a copyright notice, or the notification, “All Rights Reserved”. 🙂

Hi John – There is a copyright notice on every page of the LiP site. Look right at the bottom of the page – any page on the site. It says :

Hi Bob, Loved the poem. I was really wondering what you were going to do with the names of the reindeer. Cute idea with all Filipino names! Merry Christmas to you and all your family.

MindanaoBob
Reply to  John in Austria

Hi John – I’m happy you enjoyed it! Merry Christmas to you and yours!

Danny – Malipayong Pasko, akong amigo. I am happy that you enjoyed the poem. 😉

When Juramie and I retire to Leyte, I have to remember to substitue the milk and cookies with sweet spaghetti and San Miguel Light. Of course, I might leave a glass of Tuba out also to give the big guy a choice.

I find it very funny to hear “I am dreaming of a White Christmas” as the background music at the coffee shop during my Skype Bisaya lessons with Bebe. Maybe you can write a new version with Pasko in Boracay for next year.

Thanks again,
Jack (and Juramie)

Hi Jack – Sure…. I’m dreaming of a white Christmas on white sand beaches!!! 😆

Hi Bob and Feyma, Merry Christmas to all.
Jaycee (above) not related to us.

Thank you Kevin! Merry Christmas to you and all of the family!

that’s a good one Bob …Merry Christmas an happy New Year to you and your family ..Phil n Jess

Hi Phil – It’s been a while! I hope you are doing well! Glad you enjoyed the Christmas Poem! Merry Christmas to you and your family also!