Where to begin my tale of water? On the mountain in 1998, we had a broken dirt road, single phase electricity, no phone (Land Line), no cable TV and of course no water. Yes I wondered why the hell I was buying the land.

First I’m informed there must be a wall, a great and grand wall to protect the two mango trees and the two other scrubby trees of no name on our new land. It is what landed gentry must do.

I also wondered how those plants had survived before I was there to erect that magnificent wall. Did you know that H2O (Water) was required to erect a wall?

The one thing I knew was when in a quandary scratching your head will drag a solution to the forefront of your brain when required which caused a light bulb moment!

Utica! Just drill a well. All it requires is Paul’s money. A 340 foot deep well, of course, a hand pump won’t draw it up that far; (remember Paul’s money), you’ll need a Super duper 1.5 horsepower electric pump with duel impellers. Which means power must also be added!

(Google wells, as it as its Greek to me) I’m from Boston, if you want water, open the faucet. Now I need the wall to protect the well and high priced equipment. (Again MO-$$$)

The well digger (Or driller in this case) a well driller which means there is no need to check the temperature of his ass.

My land is not that wide but very long, a rectangle vice a square. As I arrived here the next morning there is the drilling truck and rig, dead center of my land, 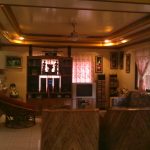 I miss my pump being here 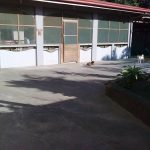 My pump house and mancave 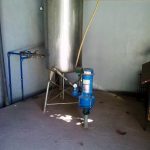 I’ll assume they figured I wasn’t going to build a house, or it was a Kano habit to have a pump and pressure tanks beside the couch and TV in the living room. Thank god I came up that day. But they said; this is where the water is. MY MIND IS THINKING: “How in the name of all that’s HOLY do you possibly know that?” Thankfully that was only in my mind and never got loose into the public square.

Paul Logic used to get my way; “Sir; please cancel the drilling, for if I can’t have a house, I no longer need a well.” He scratched his head, nodded in agreement and found a suitable spot off to the side. And we stayed friends as I had given him respect (FACE).

Problem solved, one more popped up within seconds, my neighbor filed a complaint that my deep well was going to empty his thirty foot well. SAY WHAT???

The Barangay Kaptian arrived and listened to the problem, and then attempted to explain to the neighbor that the water at 350 feet is not connected to the water at 30 feet. My neighbor used the old standby; “It’s because he’s rich.” Commence drilling again.

First the big wall then, the house, plus fish ponds and my Mancave and drinking house (Built around the Pump) everything was done…and the years slid by. I was as happy as a clam.

Yes the years have passed by: Then the system stopped flowing like….like water!

There is leather do-hicky on the end of the 340 foot pipe that does something that’s needed. (Again I’m from Boston) Pre-Planning we had left a re-movable roof panel just in case. This was that time or the “CASE”. A pulley and stops were used to lift each 20 foot piece of pipe. 12 pieces were out, and only five more to go when the assistant neglected to use a stop and the last 5 pieces plummet to the bottom of the well. Oh my: that is a real pickle we’re in. Fishing with wire 240 feet to try and connect to the sunken pipe is the same as attempting to urinate to the top of a 50 foot piece of rope. Electro magnet, two inches around and powerful enough to lift a hundred feet of galvanized pipe? Please remember where I am, anyway the crew went to lunch and then ran away.

Now for pure stupidly, the owner dropped by to pick up his equipment. Sir I think your crew took it when they ran away and lied to you and maybe they sold it. Always make the story plausible. Major head scratching!

Well I guess I need a new well, Sunny showed up with his truck, and drilled a new well, 380 feet deep (We did get to use the twelve pieces of pipe I had from the Runaway crew. Sunny left me with a few more years of good flowing water. (Remember Paul’s money?) (He discounted my price in exchange for some well digging equipment I happened to have laying around. (A win-win)

A water company appears out of the clear blue of the western sky. We will name this new enterprise “Fly By Night” I was doing fine with my well. So I passed on the deal. There was blue plastic pipe laying all over the Purok none buried and easy to fix but not, the thousands of leaks every fifty feet. The water flowed 24-7 until it didn’t. Then it stopped for days at a time. Then it stopped forever and the owner ran away.

Do I want city water? Yes it is cheaper, as it cost me P1, 200.00 per month in electricity to run my pump, whereas the water costs only P 300.00 per month. (Based on the City of Dinalupihan water district)

So the Din-Bat water district, came in and ripped up all the blue pipe with the tape on it, then buried the new pipe and installed meters. So for the past five years we have had semi-trouble free water delivery. (We all know there is no trouble free anywhere on earth)

Now the fourth week of February 2018something brand new occurs. The Barangay decided to dip their toe in the water business. Please don’t ask me why, I don’t think even they do.

Monday at the homestead, a steady pounding sound is drifting in our window. I looked at Mayang and asked: “Should we investigate?”

There at our gate was a lady in a Trike with a work crew busting up the pavement that belongs to me. She told Mayang to not get involved in Barangay business.

Oh my god, it is a Katie bar the door moment, I took my cue from the four workers who were slipping away to the wall on the other side of the street, I followed. It was in Tagalog, and going strong, Mayang’s twin sister will broach no one messing with her sister, no I almost (I said ALMOST) had empathy for the Trike Lady. Off to the Barangay hall, the guy in charge (Kaptian wisely absent) first wanted to know who the hell Trike Lady was. It seems her husband is an investor in the new water (Soon to be secondary) system.

It reminds me of a silly guy like Governor Brown of California (He’s the Barangay Kaptian) Going against the Mayor of Dinalupihan. (He’s like President Trump) Who do I think will win?

So the problem was solved between Trike Lady and Mayang, and the work will continue, with me signing up for the new water system, because I know where my bread is buttered I’ll alternate between both systems and not anger either faction. Once more Paul’s Money will save the day. The US Government taught me very well; if you encounter problems, toss money at it. (LOL)

While breaking up the pavement to install the Barangay pipe the workers broke the Dinalupihan water district’s water pipe. (We knew that was going to happen!) The truck rushes from Din-Bat to repair my pipe. How long would I have to wait if it was just a normal broken pipe? The fur did fly; I sat leaning on my cane and having a refreshing cold drink.

You cannot make this stuff up.

My water costs P35 a month. Only problem is I live near the source so not much pressure.

Hi Paul, I have always had my own well and septic system. The way I look at it is, the water is free but getting it to the tap is where the expense comes in. In the 40 or so years I have owned my house I have had 3 water pumps. The last one is a submersable one with the pump being near the bottom of my 80 Ft well. That one has been there for about 20 years now and it cost me around $2000 when I had it installed. Probably cost a lot more these days and… Read more »

Wow! Sounds like drilling a well has been a big source of head ache for you. Enjoyed reading and learning of your experience!

Jay;
Twice in 20 years only once if they hadn’t dripped the pipe down the hole. Next week I’ll still have my well, and two outside sources. We’ll wait and see if my tanks go dry. (LOL)